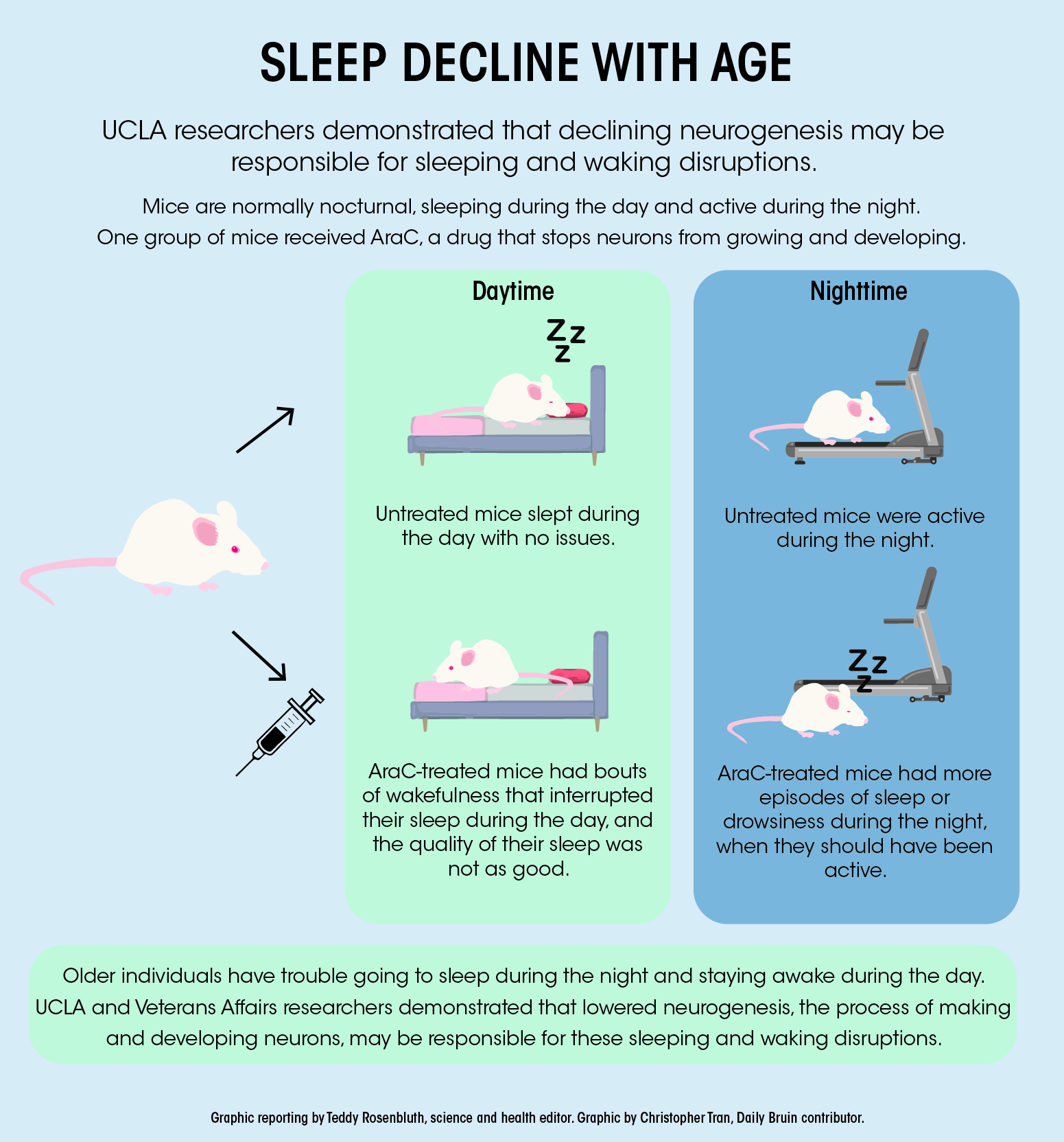 Poor sleep among the elderly may be a result of declining brain cell growth and development, according to UCLA researchers.

Researchers in the lab of Noor Alam, an adjunct professor of medicine at UCLA and a research physiologist in the Veterans Affairs Greater Los Angeles Healthcare System, described how declining neural development may cause difficulty falling asleep or staying awake in aging individuals in a study published February.

There are about 40 million elderly people at risk for developing some kind of sleep disturbance in the United States, said Andrey Kostin, a researcher in the VA Healthcare System and lead author of the study. Chronic sleep disturbance is associated with cognitive decline, anxiety and depressive disorders, and increased risk of injury, he added.

“People who are 65 and older complain of sleep disruption at night … and (falling asleep) during the day,” he said. “This is a hallmark of aging.”

Aging is associated with disrupted sleeping and waking behaviors and a decline in neurogenesis, the process of forming new brain cells. Recent research, however, suggests that neurogenesis continues later in an adult’s life than previously thought, particularly in the hypothalamus, the region of the brain responsible for sleep, Alam said.

This observation suggests new neurons are required to replenish the cells in the brain and support proper brain function, Alam said. In elderly individuals, however, the process of neurogenesis is less active, leading the researchers to believe that declining neurogenesis may be a cause of age-related sleep disruption.

Previous research suggested that poor sleep may lead to improper neurogenesis, said Md. Aftab Alam, a UCLA researcher and author on the study. This study is the first to suggest that defective neurogenesis may lead to poor sleep instead, he added.

To test if neurogenesis is necessary for proper sleep and wake cycles, the researchers stopped neurogenesis in young mice by injecting them with AraC, a drug that stops cell division and cell growth, near the hypothalamus.

After confirming most of the neurogenesis in the hypothalamus had stopped after four weeks of treatment, the researchers observed the sleeping and waking behavior of the mice, according to the study.

During the day, when mice are normally asleep, AraC-treated mice got less sleep overall than untreated mice. Instead of sleeping continuously, AraC-treated mice slept in shorter, fragmented increments of time, waking up and falling back asleep throughout the night, Noor Alam said.

“(Mice with impaired neurogenesis) have fragmentation of sleep … and are unable to maintain it,” he said.

AraC-treated mice also recovered less robustly from sleep deprivation than untreated mice, Noor Alam said. Altogether, the behaviors of AraC-treated mice mimicked the sleeping and waking behaviors of old mice, Kostin said, leading the researchers to believe that a decline in neurogenesis may be a cause of age-related sleep disruption.

Stopping the AraC treatment for eight weeks only partially restored sleeping and waking behaviors. Noor Alam said he was unsure as to whether the researchers just needed to wait longer to see a complete recovery or if the AraC treatment caused complete or long-term damage to the neurons.

Imaging of the mice brains showed that the growing cells affected by AraC treatment corresponded to areas involved in sleep regulation and circadian rhythm, Kostin said, suggesting the creation of new neurons is necessary for maintaining proper sleep.

Future research will focus on identifying the role of developing neurons in order to identify how neurogenesis affects sleeping and waking behaviors and circadian rhythm, he added. 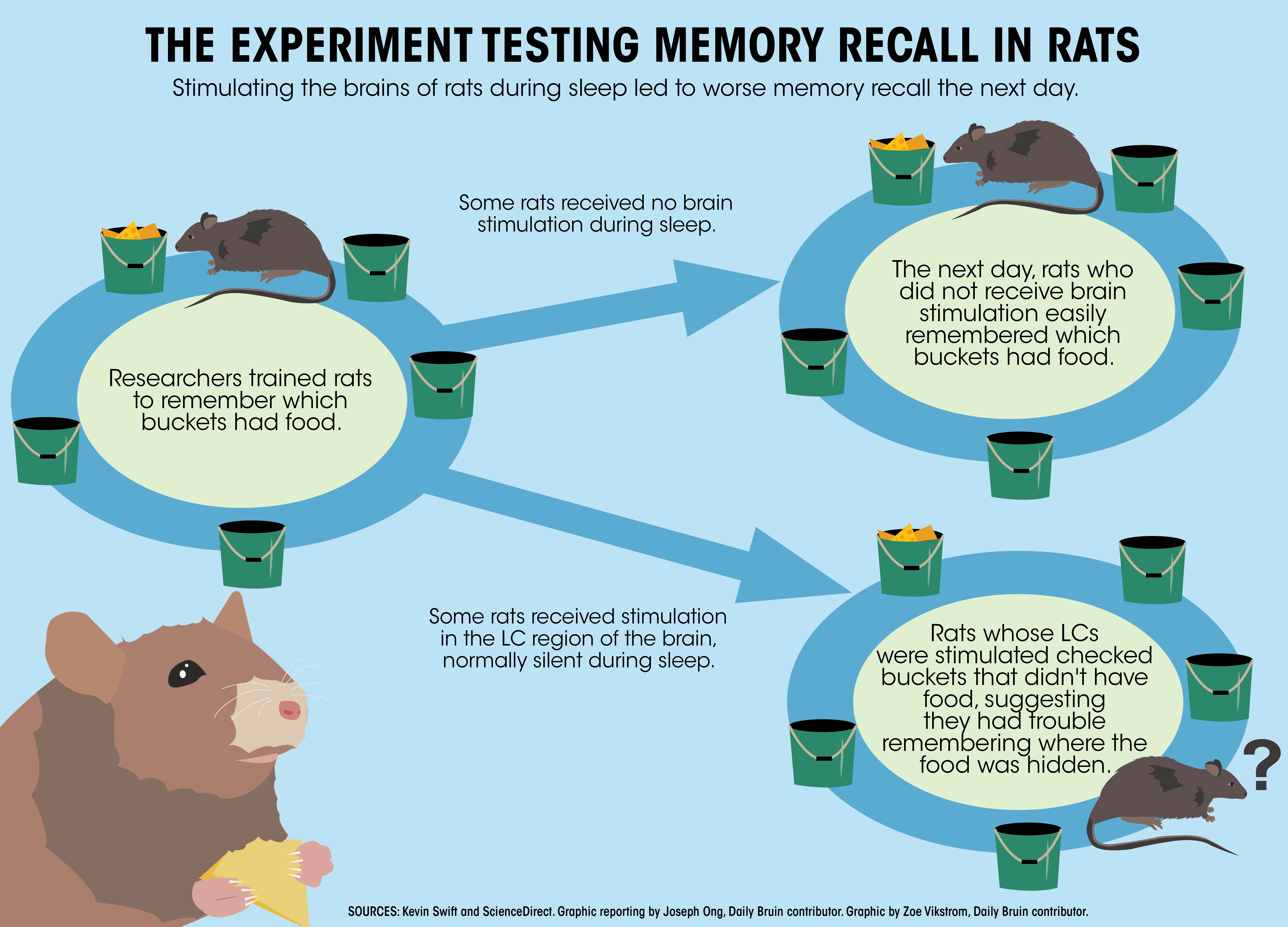