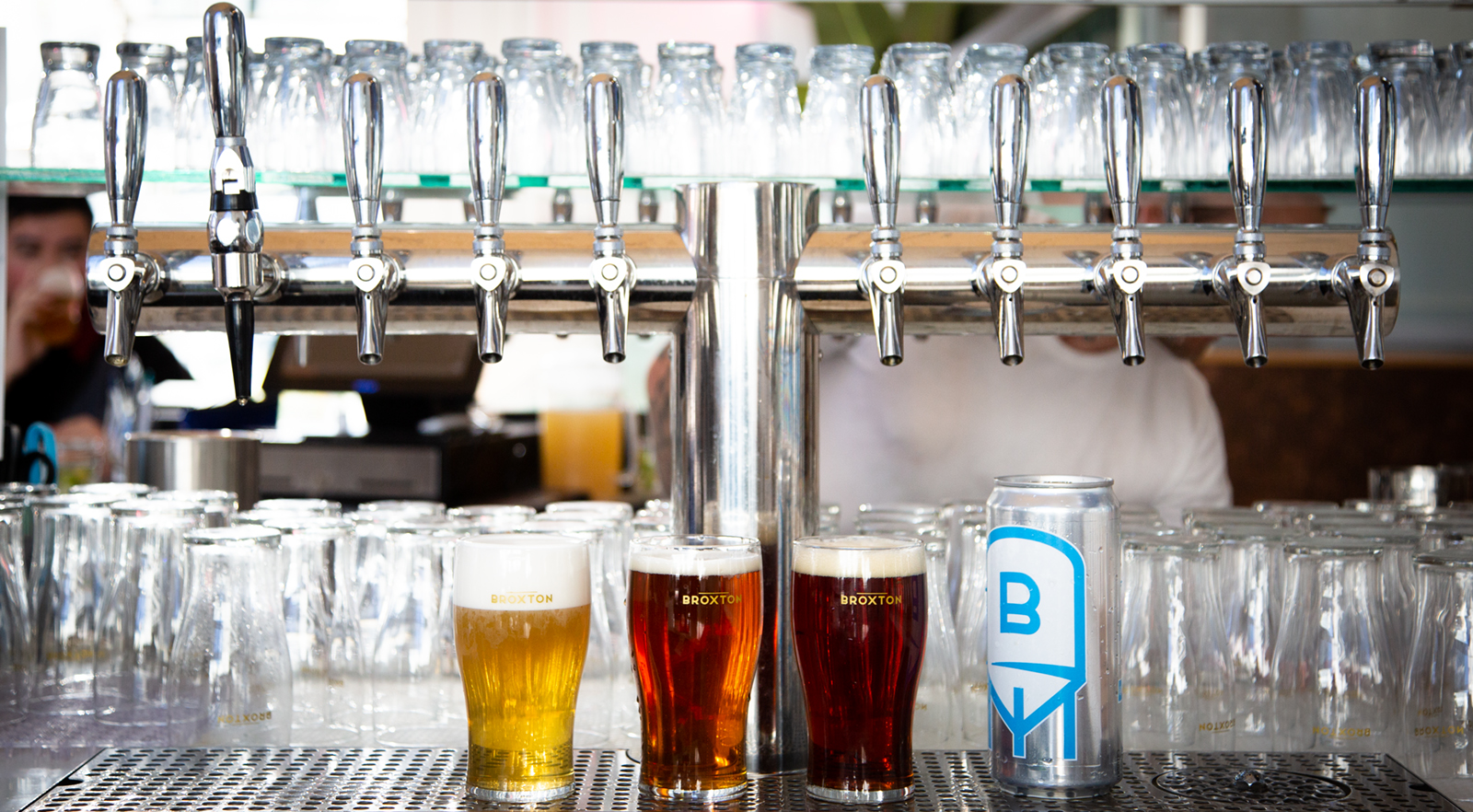 Broxton Brewery is the first business able to serve their own brewed beer since the North Westwood Neighborhood Council was formed in May. (Tanmay Shankar/Daily Bruin)

Correction: The original version of this article misquoted Paige Reilly.

Broxton Brewery began brewing its own beer in its on-site microbrewery Feb. 9, marking the first time a brewery has served its own alcohol in Westwood since a new neighborhood council was formed last year.

Though Broxton opened in October, it only recently began brewing its own beer due to construction issues installing the initial microbrewery.

Paige Reilly, the director of operations for New Original Breweries, a collective of breweries that Broxton Brewery is a part of, said there were issues in the construction because of the complicated nature of the system.

“Installing a seven-barrel brewing system in the historic Janss Dome building was no easy feat,” Reilly said. “Because there are so many moving parts, it took a few months for us to get the brewing side of things up and running”.

Prior to brewing their own beer, Broxton sold a rotating list of beer from other breweries such as Smog City, The Lost Abbey and Stone Brewing.

Reilly said Broxton Brewery had to secure its liquor license and a Conditional Use Permit from the city prior to opening, as well as negotiate the terms of the license with the Westwood Neighborhood Council, Los Angeles City Council and other neighborhood groups.

Broxton Brewery is the first business able to serve their own brewed beer since the North Westwood Neighborhood Council was formed in May 2018.

The NWWNC formed following a vote to subdivide the jurisdiction of Westwood from the WWNC. Westwood Forward, the group behind the subdivision, ran on a platform of addressing issues such as affordable housing and a lack of nightlife entertainment in the area.

Michael Skiles, president of the NWWNC, said Broxton faced a lot of opposition from the WWNC, which previously had jurisdiction over Broxton Brewery.

“They just make you go through a ton of red tape,” Skiles said.

He said the WWNC met with Broxton on 10 separate occasions to discuss the specifics of the new business. These meetings included checking for compliance with historic and restoration consultants and getting verification from civil engineers that the brewery would not damage the foundation of the building’s infrastructure.

Skiles said he was skeptical of whether the checks for safety were necessary, adding it is only a microbrewery as opposed to a full-scale brewery.

“In the grand scheme of things in a stable, solid building, that is not going to cause any problems. This isn’t a full-sized brewery with giant vats, this is a microbrewery,” Skiles said.

Lisa Chapman, president of the WWNC, said the WWNC regulates alcohol with city and zoning laws. She denied the claims that the WWNC met with the brewery 10 times, adding Broxton went to the WWNC on two other occasions to discuss restoring a window in the building.

She said the only historical renovation was voluntarily proposed by Broxton, but ultimately did not occur.

“They voluntarily wanted to restore a window in the historical building and wanted to bring it back to its original state, but ended up not being able to do it because of either the expenses or problems in doing it,” Chapman said.

Despite the hurdles he said were imposed by the WWNC, Skiles said he thinks the council was uncharacteristic in supporting the opening of the microbrewery, which he viewed as an effort to maintain some credibility during the NWWNC subdivision process.

He said from the summer of 2017 to May 2018, when the subdivision happened, the WWNC went back on their default positions on businesses that offered alcohol, limiting some of the restrictions on fast casual restaurants, and passing a resolution saying they were supportive of housing developments.

Skiles also said the number of restrictions Broxton faced could have been prohibitively expensive to a smaller business.

“If they weren’t a chain and instead were a young entrepreneur starting their first business, they would have gone bankrupt before they were ever able to open,” Skiles said.

“In the time since it’s formed, the WWNC had 46 instances of discussions about alcohol use,” Thomas said.

He added the original rules from the WWNC did not allow for pitchers, happy hour, live entertainment, dancing or pool tables.

Chapman said the restrictions on live entertainment, dancing and pool tables came from city laws. If businesses wanted to offer them, they would have to apply through the city, she said. However, she added no businesses wanting these amenities came to the council.

“As far as I know in the last nine years, in the existence of the council, no business has come to us to ask about dancing, not even once,” Chapman said.

“The issue with pitchers is that when they come to the table, people are given drinks that aren’t ordered by them,” Chapman said.

He said the owners of Rocco’s Tavern asked the NWWNC for support in removing restrictions placed on them by the previous council, such as the inability to reduce prices on drinks during happy hours, to use their front door after 10 p.m., to open their windows and to offer dancing or live music.

“(The NWWNC) thought all of these restrictions were getting in the way of a business not only succeeding, but also fun and entertainment for the community,” Skiles said.

However, Skiles added the purpose of these regulations is to preserve the historic nature of Westwood.

“I think it’s fair to say that the WWNC would like to see Westwood be more historic and more of a place that has fine dining and retail whereas Westwood Forward would rather see Westwood be an energetic, lively and inclusive place,” Skiles said.

Chapman said while reducing prices on drinks may lead to more drinking, she did not think the council should regulate prices itself.

“There are studies in college towns that reduced pricing on drinks leads to more drinking,” Chapman said. “I personally was never for that – it’s not our place to police how people drink.”

Skiles added he thinks Broxton brewing its own beer signaled a bright future for Westwood.

“The approval and success of businesses like the Broxton and Rocco’s is encouraging for both Westwood Forward and future businesses that would consider offering Westwood a lively atmosphere and entertainment,” Skiles said. “It signals that Westwood Village is ready to welcome these businesses and reclaim its legacy as a fun and exciting place.”