The Quad: Assembly Bill 302 shows promise for assisting students who are homeless 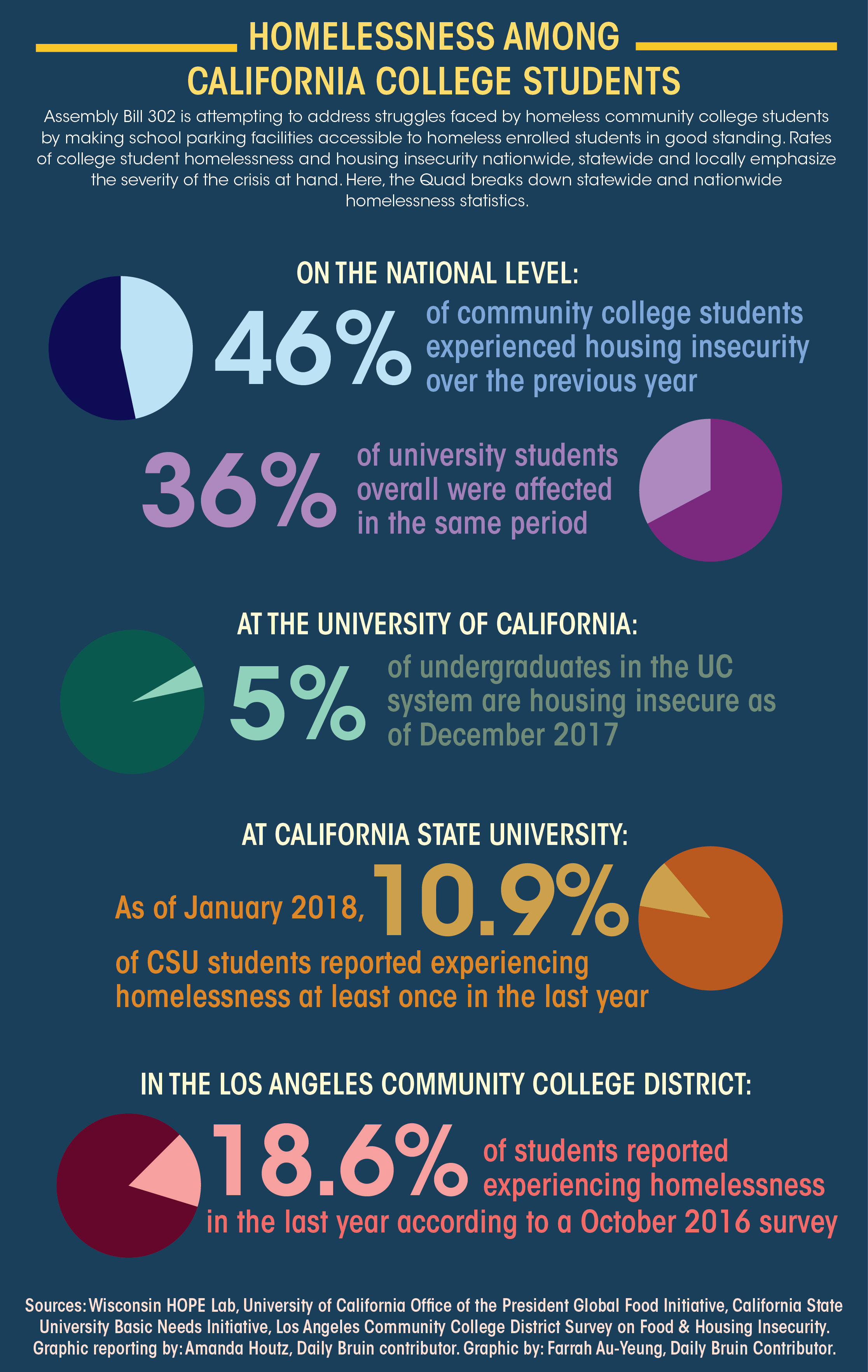 Homelessness in California is undeniably epidemic.

The recently proposed Assembly Bill 302 is attempting to alleviate this burden, at least for the staggeringly large number of college students who lack shelter.

Last month, California Assembly member Marc Berman introduced AB 302, which would require community college campuses to grant homeless students enrolled in their institution access to the campus’ parking facilities during the night. Students must have paid their enrollment fees and be in good standing with the college to qualify.

AB 302 specifically applies to community college campuses, but the nature of its subject matter has the potential to transcend these bounds – homelessness can affect college students within any system. While it’s not going to immediately impact the University of California system, the initial bill can be thought of as a type of pilot program; if it results in any degree of success, it would be worthwhile to expand its reach to the UC system soon.

The bill, proposed Jan. 29, was referred to the Committee on Higher Education Feb. 7, and may be heard by the committee March 1 as per California Assembly procedure.

The urgency of this bill is underlined by the climate out of which it arises. The Los Angeles Community College District conducted a study in October 2016 that found 18.6 percent of students experienced homelessness in the past year. This percentage, when applied to the 232,218 students enrolled in the LACCD in the 2015-2016 school year, emphasizes the magnitude of people this bill, if implemented then, would have had the potential to touch – just over 43,192 students in LA County alone.

The need to address student homelessness at the community college level is apparent, but homelessness in other types of university systems cannot be overlooked.

A UC survey in the Global Food Initiative’s December 2017 report indicated 5 percent of UC students said they experienced housing insecurity sometime during their enrollment. Accordingly, the UC system has taken a number of steps to address its homelessness crisis, including undertaking a mission to add 14,000 affordable beds by 2020. The UC Board of Regents also approved a $27 million allocation to address housing needs in July 2017.

As it stands, the percentage of homeless students is significantly lower in the UC system compared to community college districts like LACCD. However, comparing percentages tends to take humanity out of the issue; there are students who need help, and a bill like AB 302 could be a positive start.

In the meantime, students acting in solidarity here have taken the initiative to alleviate student homelessness. UCLA students founded Bruin Shelter in October 2016 to provide shelter and support for homeless students from schools in the area.

The need for an organization like Bruin Shelter is augmented by the location of UCLA and surrounding schools.

Gabriela Solis, a UCLA graduate student and a director of case management at Bruin Shelter, said there is a large problem of inadequate access to the housing markets of Westwood Village and the greater Los Angeles area. She added that the housing market surrounding UCLA’s campus is not particularly affordable – this was also noted in an article by the Los Angeles Times, which read that Westwood is the most expensive housing market in the state of California.

Thus, the problem is clear regardless of institution type, but is the proposed solution adequate? Berman acknowledges that having students sleep in their cars is not the ideal situation.

“A healthy society would be able to provide housing for residents at every income level,” Berman told the San Mateo Daily Journal. “But we are so far away from that in California.”

Solis said she believes the bill’s requirement that students remain in good standing is a cause for concern. She added that the obstacles homeless students face that could prevent them from meeting this requirement – such as struggling to access services, showers and a good meal – could be an issue.

In other words, AB 302 certainly has its shortcomings. It is predicated on the fact that homeless students have cars, and it only applies to a subset of the college population that is battling homelessness. Additionally, some may argue that the energy and funds invested into this innately temporary bill could detract from finding a more permanent solution to student homelessness.

Arguments and concerns of this type may be valid, but AB 302 is not supposed to be the perfect bill in the battle against student homelessness. Rather, the bill should be appreciated for what it is – a relatively simple change that has the potential to serve as a catalyst for finding a permanent, or at the very least more long-term, resolution to student homelessness.

It’s clear that AB 302 is not the ultimate solution to ending homelessness among college students – a parking structure on a college campus is obviously not a home. But the bill is a step in the right direction toward helping college students without a shelter.