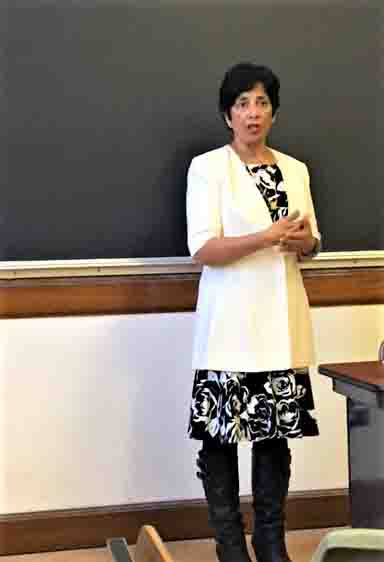 Gyanam Mahajan, an Asian languages and cultures professor, has been teaching a Hindi-Urdu language class at UCLA for over a decade. She said she hopes teaching both Hindi and Urdu as one language in her lectures can help students reconcile their differing views regarding controversial South Asian geopolitics. (Courtesy of Gyanam Manajan)

A UCLA professor aims to bridge the political and cultural divides between students of Indian and Pakistani heritage by bringing them together in a Hindi-Urdu language class.

Gyanam Mahajan, an Asian languages and cultures professor, has been teaching the class at UCLA for over a decade. She said she hopes teaching both Hindi and Urdu as one language in her lectures can help students reconcile their differing views regarding controversial South Asian geopolitics.

India and Pakistan have had a long history of military conflict over territorial disputes and have fought four wars since they gained independence from the British Empire in 1947. In February 2018, Jaish-e-Muhammad, a Pakistan-based extremist group, launched a surprise attack on an Indian military base, according to the New York Times. The Council on Foreign Relations, a U.S.-based think tank, warned in a report updated Friday that attacks like this could trigger a severe military confrontation between these two nuclear-armed nations.

Decades of hostility between the two countries have driven a wedge into a historically shared cultural identity and language, Mahajan said.

Hindi and Urdu were considered synonymous terms for a common language spoken across Northern India and Pakistan before and shortly after the partition of India. Today, however, Hindi is popularly considered an exclusively Indian language and Urdu exclusively Pakistani, Mahajan said.

Mahajan said the only difference between the two languages is the scripts they are written in. Hindi uses a Devanagari script while Urdu uses a Nastaliq script, but both convey an otherwise identical Hindi-Urdu language, historically known as Hindustani.

“There is no way that Hindi-Urdu can be two separate languages. All the function words are identical,” Mahajan said. “The grammar is completely identical.”

In fact, Hindi-Urdu continues to be spoken in Northern India and Pakistan, by South Asians abroad and in Bollywood movies. For Mahajan, this forced separation of a once-unified language can be attributed to the formation of separate national identities and the adversarial perception of the “other.”

“I think it is very convenient for politicians to distract attention away from their own inadequacies … by instilling this concept of the other,” she said. “The moment you have this other, you have someone you can vilify and blame.”

Despite widespread nationalist propaganda from both countries, Indians and Pakistanis are not so different, she said. She saw this for herself when she first left her native India to attend an academic conference in France.

Mahajan said she believes her Hindi-Urdu class rejects the metaphorical wall between Indians and Pakistanis that she thinks was constructed for political reasons.

“In one way, it was simply a question of teaching a practical language to a set of people to remove biases,” she said. “Why, on purpose, bring about an unnecessary, artificial split that leads to reinforcing stereotypes that go well beyond language?”

Students in Mahajan’s class said they think her message of tolerance is noble.

Sanjay Kumar, a third-year biology student of Indian heritage, said this class has encouraged him to interact with students of Pakistani heritage.

“It was interesting to understand that borders don’t really make actual differences, that we’re more similar than we think,” he said.

Simrandeep Shergill, a third-year political science student of Indian heritage, said she had never regularly interacted with Pakistanis before she took the class.

“Meeting students from the other country makes us feel that we’re not really that different,” she said. “We have the same origins, language and a lot of other similarities.”

Shergill added that she thinks peace talks between India and Pakistan are not likely to result in substantive reconciliation between the countries, despite it being a desirable goal for both countries’ citizens.

The Indian and Pakistani governments have often demonstrated this apathy toward long-term peace, frequently engaging in diplomatic disputes, according to the Times of India. As recently as Feb. 1, the Times of India reported that Pakistan summoned India’s high commissioner to Islamabad to protest the summoning of a Pakistani top diplomat to New Delhi.

Shergill added that conflicts can only be resolved as long as both sides wish to resolve them.

“Language could break down the barriers between the people of the two nations, but (cannot resolve) the politics,” she said.

Mahajan begins all classes with greetings in English, Hindi-Urdu, Punjabi and Gujarati to demonstrate the cultural solidarity she says South Asians aspire to.

She said she also teaches her students to effectively combat any ignorance they may encounter.

“Even around campus today there are other students who come from India who will say, ‘Urdu is a different language from Hindi.’ My students are equipped with enough solid arguments to prove to them that it is obviously not true,” she said.

“I have a great hope that my students … will have a more tolerant attitude,” she said. “Right now, each one of my students is an ambassador for peace.”