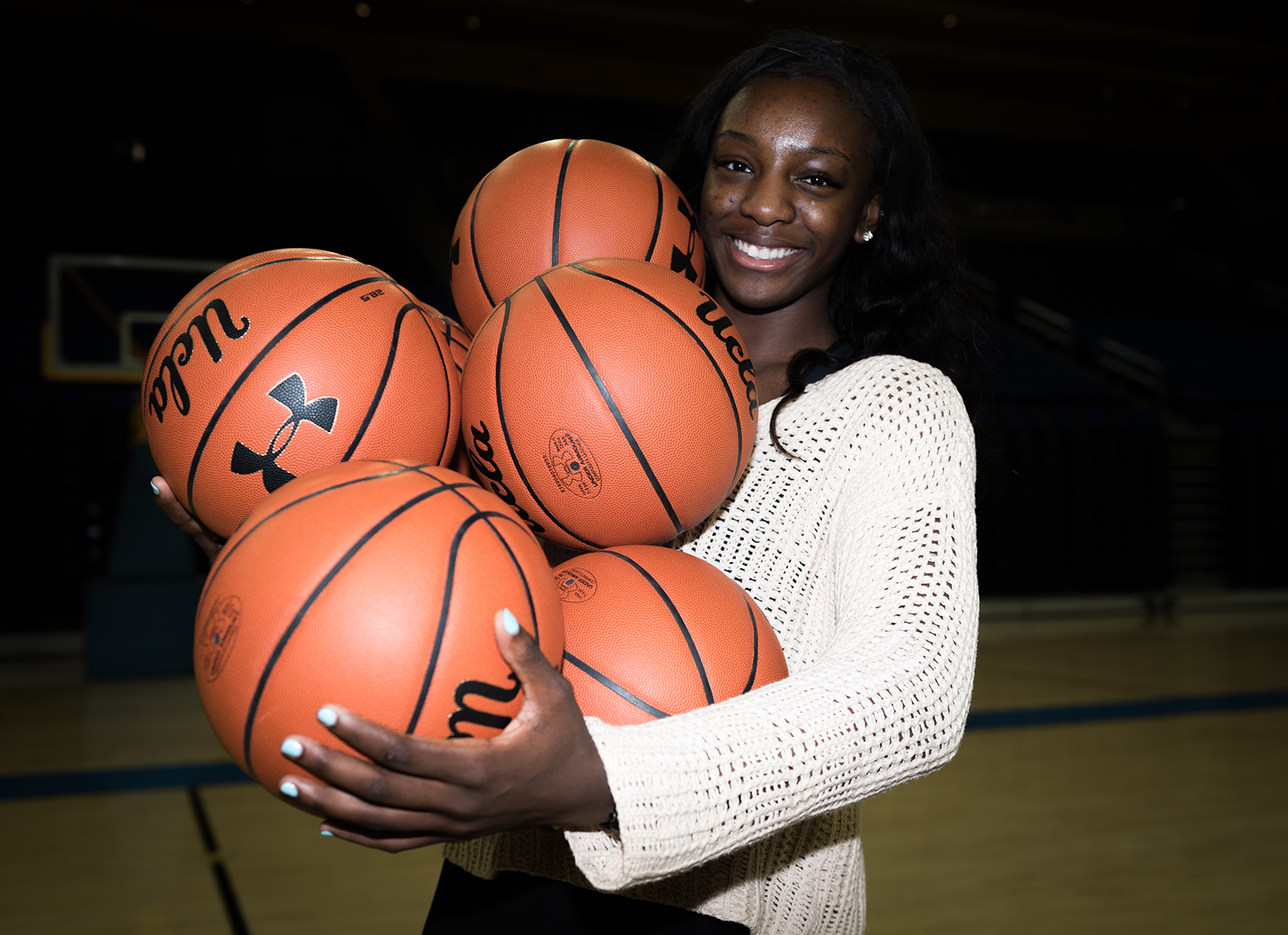 Sophomore forward Michaela Onyenwere – the Bruins’ leading scorer – brings an exuberant, bubbly personality to UCLA women’s basketball both on and off the court. (Niveda Tennety/Daily Bruin)

“I love getting my nails done because I don’t like looking bare,” said the sophomore forward. “I just feel like when they’re plain, they’re boring.”

Whether it’s manicures or pedicures, Onyenwere – who is averaging a team-high 17.1 points for UCLA women’s basketball this season – goes to the nail salon regularly.

Usually, pink is her go-to color.

“I like having a color that represents me and how I’m feeling at the time,” Onyenwere said.

Onyenwere enjoys getting her nails done with some of her teammates, but she has recently made an effort to drag coach Cori Close along as well.

“If you really want to connect with kids, earn the right to be heard by going into their areas of interest,” Close said. “So I tried – in the offseason – to use that as an opportunity.”

When the Bruins returned back to campus for Summer Session C in August, Close got her first-ever manicure with Onyenwere in Westwood. But while the sophomore finally got her coach to adopt her beauty routines, Close had one request.

“She wasn’t shooting free throws very well,” Close said. “So I threatened her that if she didn’t start shooting her free throws better, I was going to make her cut her nails.”

Onyenwere said at the time, she had acrylic nails a little bit longer than her natural nails. The forward went just 11-of-20 from the free-throw line during the Bruins’ first eight games of the season.

And then she gave in.

Onyenwere went 11-of-12 from the free-throw line in UCLA’s win over Fresno State on Dec. 7 – the Bruins’ first game after she ditched the acrylics. Since then, she has shot 91.5 percent from the charity stripe – a Pac-12 best during conference play among players who have attempted at least 20.

The former McDonald’s All-American said spending time with Close both on and off the court made her realize UCLA has been a unique experience.

“It’s really important to have a good relationship with your head coach,” Onyenwere said. “I’m so grateful because some programs aren’t like that.”

Even without acrylics, Onyenwere’s flashy nail colors are just a small part of her bubbly personality – one that resonates in basketball and beyond.

“She goes at such a high work rate,” Close said. “Our heart rate monitors (measure) the amount of steps she takes and the force with which she jumps, (and it’s) higher than anyone else on the team.”

But the energy Onyenwere exerts doesn’t end when she walks off the court. She often dances during stretches, leads pregame hype circles and cheers the loudest on the bench.

Onyenwere – known by her teammates for her smooth moves – has also sometimes convinced Close to dance along.

“She just brings this effusive joy and hilarious flamboyance to whatever she does,” Close said. “Not in an arrogant way, but in a charismatic way. She’s just someone that everyone likes to be around.”

Whether it’s dancing in the locker room after making the Elite Eight or dancing on the bus after defeating Arizona in triple overtime, Close said she feels obligated to participate due to Onyenwere’s infectious humor.

“It’s just become this thing where you get to make fun of your really terrible dancing head coach anytime you have a big win,” Close said. “But I think that’s fun because it’s a way for me to connect to them.”

Over the years, Close has mastered the Milly Rock, the Floss and even the “In My Feelings” challenge.

“I genuinely love (Close) and I love who she is as a person,” Onyenwere said. “Even if it’s a stupid dance, she has become so comfortable with us, and that’s something you love to have in your head coach.”

“The energy everyone sees on the court – that’s pretty much her at all times,” Miller said.

Fear of the spotlight

Despite Onyenwere’s animated persona, the Colorado native hates attention – especially when it comes to basketball.

The three-time Colorado Gatorade Player of the Year averaged 20.8 points, 8.9 rebounds and 3.4 steals per game during her senior year of high school. Onyenwere was receiving offers from top basketball programs around the country, to the point where it got overwhelming.

“I did not like the recruiting process at all,” Onyenwere said. “It was just a lot for me to have that much attention. But for me, mostly it was the relationships that I had built with my coaches (because) I felt really close to them even before I got (to UCLA).”

As a freshman at UCLA, Onyenwere averaged 6.9 points in 17.1 minutes per game off the bench.

She got her first career start against Seton Hall on Dec. 17, 2017, where she scored the first eight of UCLA’s nine points in the Bruins’ eventual win over the Pirates.

But Onyenwere asked Close to never start her again for the rest of the season.

“She just didn’t want to be in that starting role,” Close said. “She thought she would be more effective for the sake of the team coming off the bench.”

When Onyenwere logged 20 points and 11 rebounds off the bench against Utah for her second career double-double a month later, she did everything she could to avoid doing a Pac-12 Networks postgame interview.

“We’ll talk all the time when she’ll have a big game, and if that’s the game we lost, it doesn’t matter to her,” Miller said. “And so that’s always her big thing, it’s always team first.”

Onyenwere said she isn’t quite sure where she gets her confidence from.

But for the sophomore forward, a lot has changed.

“I think last year I was a little bit more hesitant to do things,” Onyenwere said. “I was kind of more worried about not messing up. It was kind of a hard shift for me, but once I got it down, it was easy to play free and just have fun.”

Onyenwere has learned to filter out the attention in order to focus on improving her game.

The forward – who went just 1-of-6 from beyond the arc in 35 games last season – is now shooting 41.9 percent from deep during conference play.

“I’ve been practicing my outside game a lot because I just wanted to expand my game and not just be a one-dimensional player,” Onyenwere said. “A good player has to be able to shoot free throws, shoot midrange, shoot 3s and also drive, so just expanding my toolbox is something that is going to help not only me, but my team.”

The Bruins’ 3-5 start to the 2018-2019 season made it seem like they would fully take a plunge after graduating a decorated senior class. But UCLA is now tied for fifth in a conference with five top-25 teams and has wiggled its way into the March Madness conversation.

On Friday, Onyenwere and the Bruins will travel to Colorado for an opportunity to win their fifth consecutive game in front of her hometown crowd.

But her nails won’t be pink.