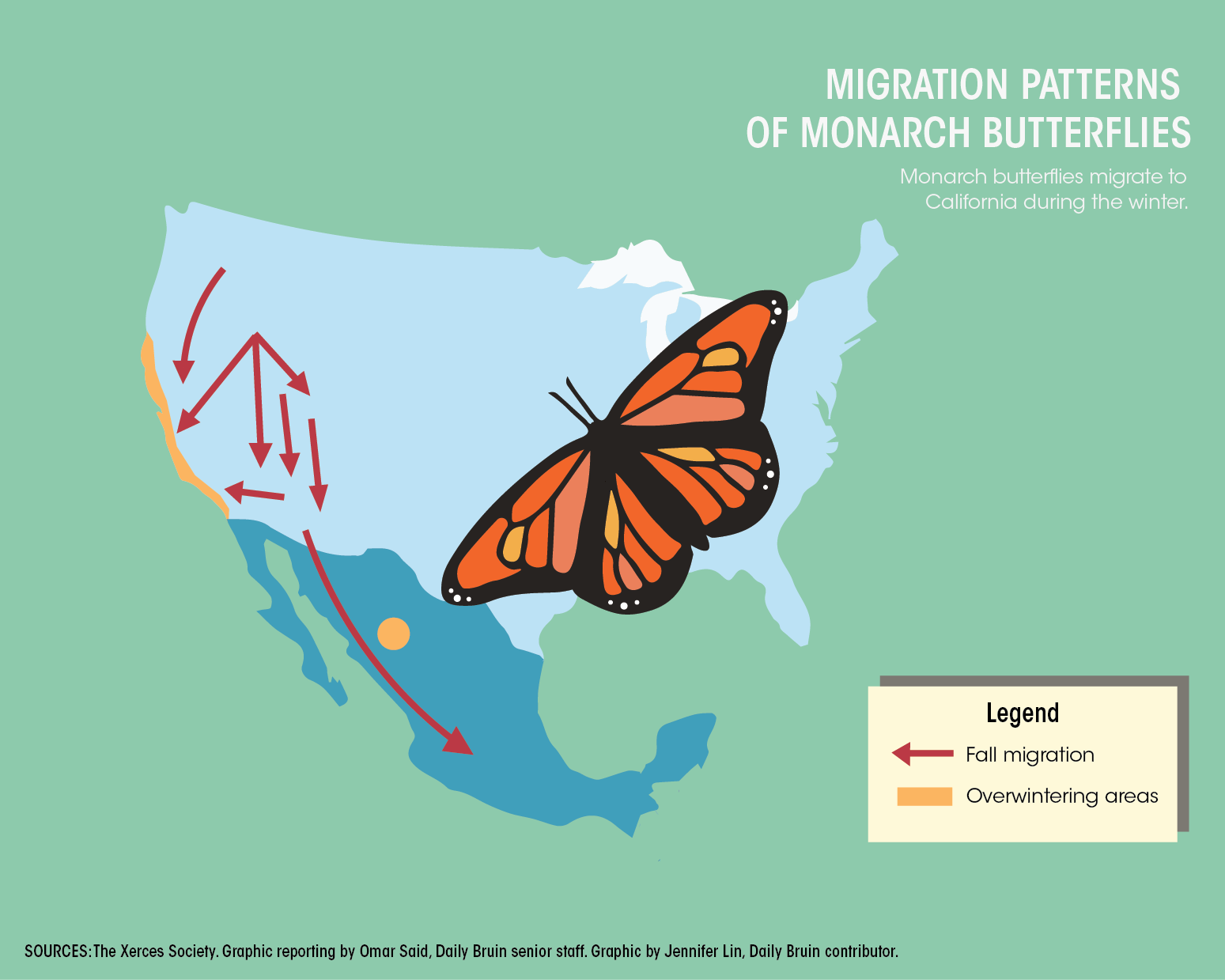 Monarch butterflies, long a part of California’s winter landscape, may soon be on their way to extinction.

The Western Monarch Thanksgiving Count is a yearly count of monarch butterflies organized by the Xerces Society for Invertebrate Conservation. The society found the species’ population declined by 99.4 percent within the past 40 years. Up to 10 million monarch butterflies spent the winter in California during the 1980s, according to estimates.

Elizabeth Long, the director of conservation science at the Mohonk Preserve, said many different factors contribute to the decline in monarch butterflies.

Long, a former postdoctoral fellow at UCLA, added that losses in the butterflies’ habitat were one factor in the species’ decline. Tree groves, which once acted as the butterflies’ habitat, have fallen victim to housing and business development, as well as various diseases, she said. Farming practices have also contributed to the habitats’ decline via pesticide contamination and the removal of milkweed, which monarchs depend on for food.

Arthur Shapiro, an distinguished professor of evolution and ecology at UC Davis who researches butterflies, said this decline does not only apply to monarch butterflies.

“Part of the problem is that there’s been so much focus on the monarch that people have not noticed or cared to notice that the phenomenon is a wider phenomenon. It’s not just monarchs,” he said. “Butterflies at low elevation in California are in serious decline right now.”

Long also said climate change was a factor in the butterflies’ decline. Monarchs need to live in a constant temperature, which is why they migrate to the more temperate central coast in the winter. However, those areas are starting to experience more fluctuations in temperatures.

“If it warms up too quickly too early in the season and they disperse from their wintering grounds, they can be in jeopardy,” Long said.

Long said this decline could indicate wider effects on the ecosystem. Monarch butterflies are referred to as an umbrella species – which means protecting monarch butterflies also protects many other species that share its habitat. Many of the species that fall under the monarch’s umbrella of protection are also declining, Long said. Shapiro added that the butterflies play an important role in their ecosystems.

“The caterpillars eat plants, and everything eats caterpillars,” Shapiro said. “Caterpillars are a standard food source for all sorts of things, and we know from a now widely publicized study in Puerto Rico that insect declines are followed by crashes in insectivorous birds.”

Wendy Chen, a third-year political science student, said she thinks the 86 percent drop in the number of monarch butterflies is shocking.

“It’s kind of sad, too, because they’re so pretty, and then they’re our friends,” Chen said.

Long said there is still a chance the monarch population may recover.

“In our lifetimes we have never documented anything comparable to this in these butterflies. It doesn’t mean they won’t recover. There are certainly still healthy individuals out there. … There may be a combination of hard work and conservation efforts and good luck, and it may still be recoverable,” Long said. “(However), it’s definitely a pretty steep and scary decline.”