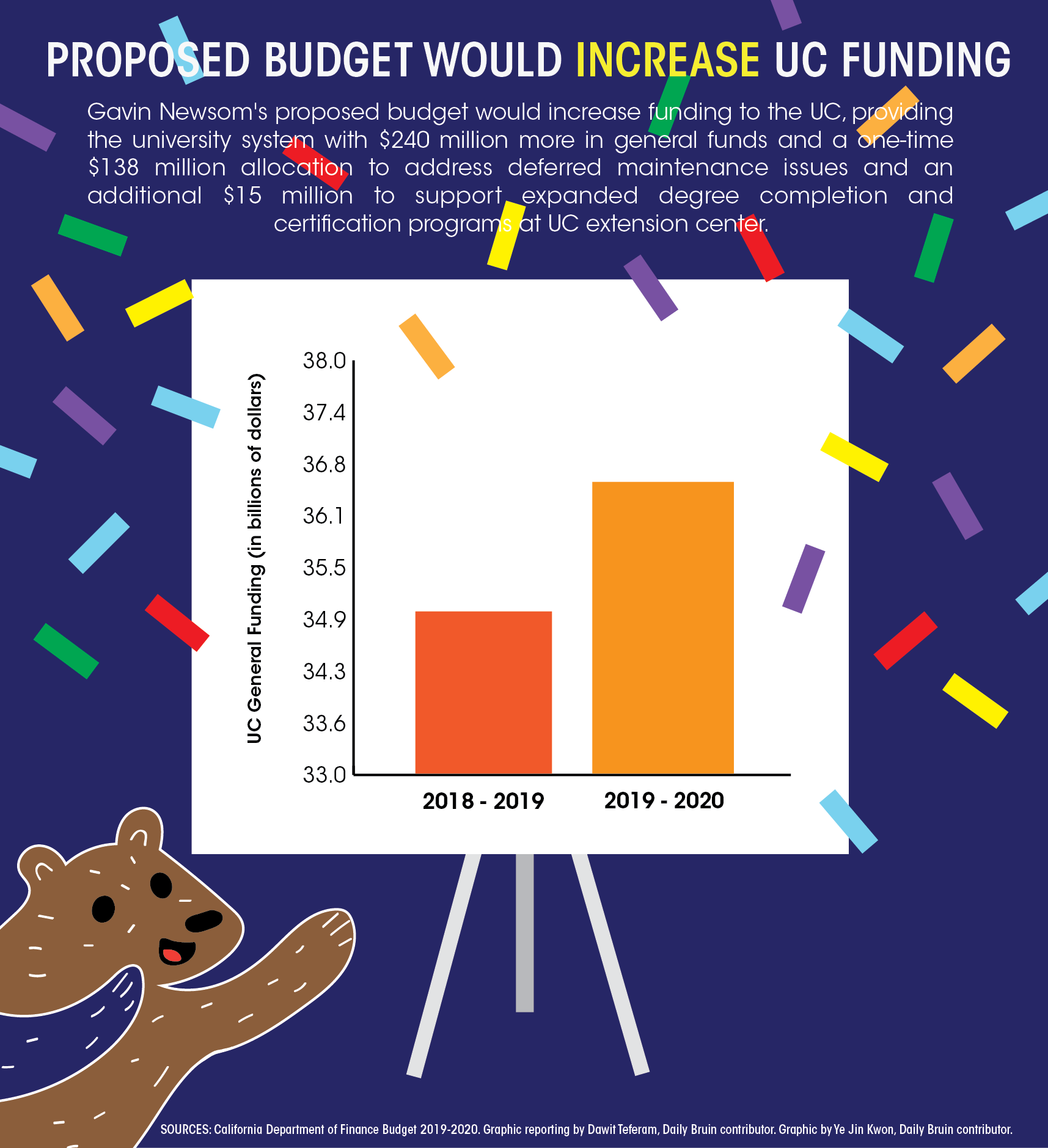 Gov. Gavin Newsom’s proposed budget for next year would increase funding for the University of California.

The proposed budget would allocate $36.4 billion for higher education, an increase of $1.4 billion from this year’s budget. According to the proposal, the budget would add $240 million in ongoing funds for operating costs, as well as efforts to increase student success, improve health services, and address student hunger and homelessness at the UC. The budget also includes a one-time fund of $138 million for the UC to fix unaddressed maintenance issues and another $15 million fund to support degree and certification programs at UC extension centers.

The goal of the funding increase is to ensure affordability by preventing rises in tuition, according to the budget proposal.

The UC system enrolled 19.2 percent more students between 2010 and 2017, and Newsom hopes to help more students from disadvantaged backgrounds graduate in a timely manner with the proposed budget, according to the proposal.

George Kieffer, chair of the UC Board of Regents, said in an email statement that Newsom’s proposal is a substantial investment in higher education.

“The $240 million he has proposed for ongoing funds will be used to support our core budget which goes to classrooms, teachers and support staff,” he said.

He added he thinks the proposal will benefit students and contribute to the financial success of the UC campuses.

Kieffer and UC President Janet Napolitano said in a statement they were pleased Newsom wants to increase funding for students and families across California who rely on state funding in the UC.

“Gov. Newsom’s budget represents a welcome step and a solid down payment in addressing priorities of the university’s 2019-20 budget plan. … The university looks forward to working with the governor and the Legislature to address our priorities … and to maintain the academic and research excellence of UC,” the statement said.

The statement also said the budget will support the University’s goal of awarding 200,000 more degrees by 2030 and enable the University to upgrade classrooms, increase financial aid and help students graduate on time.

Daniel Mitchell, a professor emeritus at the UCLA Anderson School of Management and the UCLA Luskin School of Public Affairs, said he is unsure of how well the budget would be able to withstand potential economic downturns in the future.

Mitchell said California’s economy is currently stable, but he is concerned about how a recession could negatively impact the budget and funding for the UC.

He added budgeting is an uncertain practice because it requires making decisions based on future economic conditions that may or may not occur.

“Budgeting is essentially forecasting, which is inherently uncertain,” he said.

Mitchell added that funding for the University is not permanent and is usually the first part of the budget that gets cut during an economic slowdown.

“We know from history what happens when the economy gets bad – the state cuts the UC budget because every other program is on lock,” he said. “We don’t have any protection written in the constitution by some past proposition.”

Mitchell said he does not think it is surprising that Newsom is increasing funding for the UC since he was an ex-officio member of the UC Board of Regents for eight years.

He added he does not think one-time funds for infrastructure will be effective because buildings require constant maintenance and more funds in the long run due to deterioration.

Mitchell said he thinks the proposed budget will undergo various changes by the time it is enacted because the state Legislature will have to review and approve it.

“The Legislature will not be in accord with spending the same (amount) as last year,” he said.