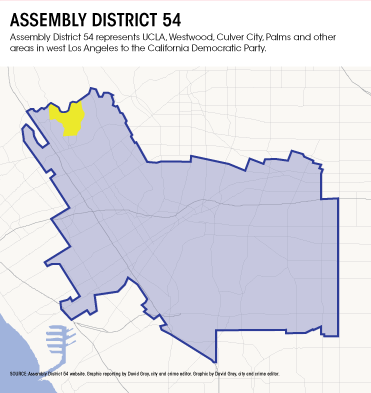 Assembly delegate election meetings are held once every two years to elect seven self-identified women and seven candidates who do not self-identify as women, according to the California Democratic Party website.

The elected delegates are tasked with promoting the party agenda, endorsing candidates for office and endorsing resolutions and ballot measures. They also elect party officials including a new party chair and a presidential nominee, according to Antoniou.

The district election had the largest turnout in Assembly District 54’s history, with over 800 votes cast, said Bryan, a policy adviser for the UCLA Ralph J. Bunche Center for African American Studies.

Bryan, who graduated from UCLA in 2017, said he wants to help improve equity in the criminal justice and legal system, as well as transparency and accountability in the party.

He added he wants his election to show current UCLA students it is possible to improve representation in their local communities.

“I hope my election will inspire students of color and students who don’t feel represented in the political process to feel inspired to launch their own campaign and race for offices beyond,” Bryan said.

Antoniou is an attorney for Bergman Dacey Goldsmith law firm and a former Daily Bruin staffer. Antoniou, who graduated from UCLA in 2007 and UCLA School of Law in 2010, said she wants to endorse Democrat candidates who are more progressive and inclusive. She was also a delegate two years ago.

Antoniou also said she was politically active while at UCLA, and thinks more students should be engaged in politics.

“I just remember being especially interested in the political events on campus and feeling like it was really important for students to take a stand and be politically engaged,” Antoniou said.

Wayne Liebman is an anesthesiologist at Providence St. Joseph Medical Center. He graduated from UCLA David Geffen School of Medicine and completed his residency at Ronald Reagan UCLA Medical Center in 1978.

Liebman said he wants to help stop corruption within the party by endorsing candidates who do not accept money from political action committees or other sources.

“We would like to end the pernicious effect that money has and the corrupting effect that it has,” Liebman said.

Leah Pressman is an assistant psychology professor at UCLA Resnick Neuropsychiatric Hospital. She was not immediately available for comment.

Steve Dunwoody is the deputy director of the UCLA Center for Diverse Leadership in Science. He declined to comment on his goals as a delegate.