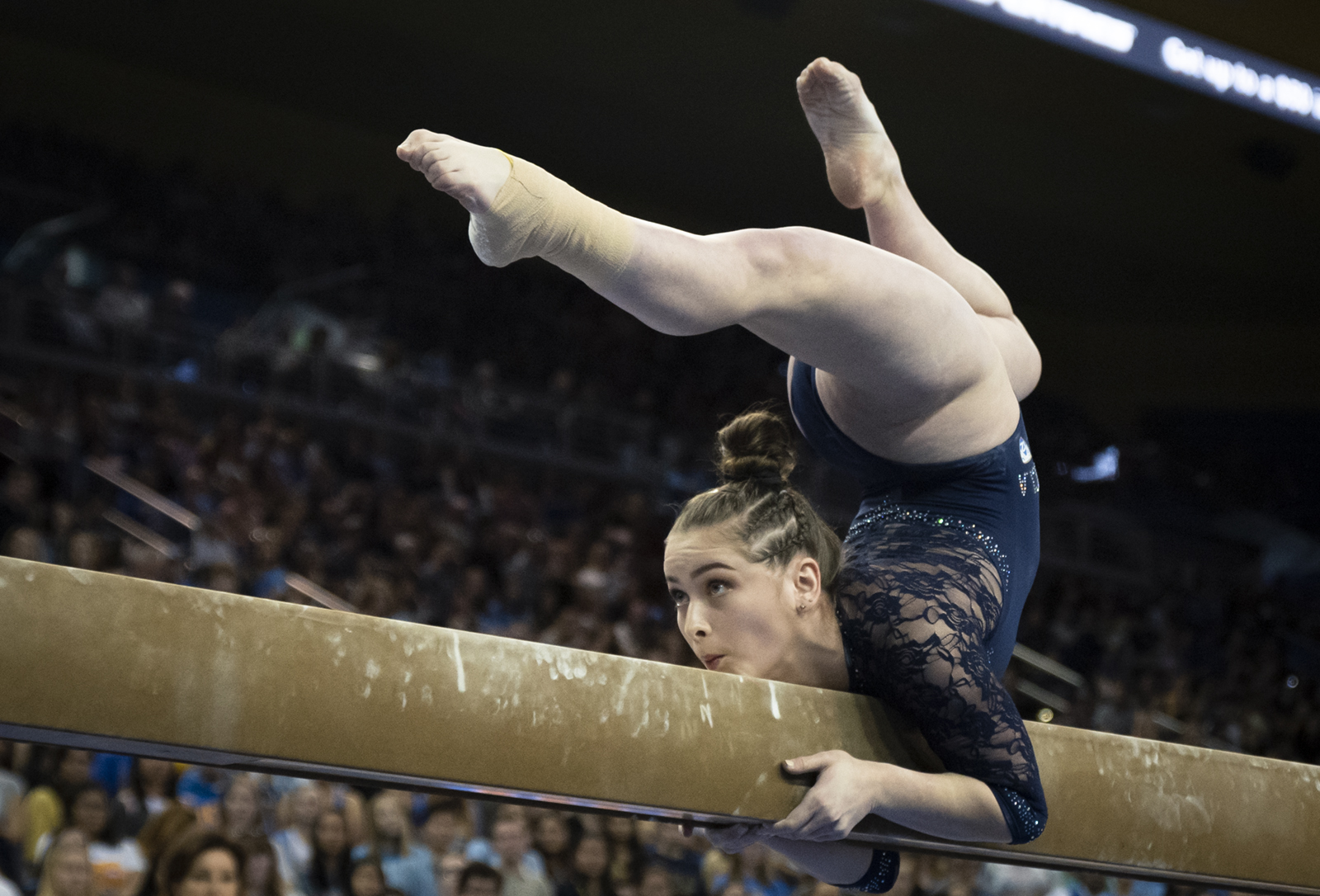 Freshman Norah Flatley recorded a career-high 9.900 on the balance beam against Stanford on Sunday. The Bruins clinched their win over the Cardinal with a combined score of 49.525 on beam in their final rotation. (Liz Ketcham/Assistant Photo editor)

Despite a steady points increase with each previous meet this season, the undefeated Bruins posted their lowest score of the season over the weekend.

“(The Bruins) work too hard and they work so well,” said coach Valorie Kondos Field. “They are fully prepared to go out and hit their routines, they just need to believe it. The scoring was really tight and the team really got themselves together after our first rotation.”

UCLA gymnasts took first place in every event. Junior Kyla Ross led in the uneven bars, freshman Sekai Wright led in vault and senior Katelyn Ohashi claimed the top spot in her only two routines of the night − balance beam and floor exercise.

Junior Anna Glenn − who scored a 9.875 on the uneven bars − said that she was proud of her performance at the meet and knows how to get better in the future.

“Everyone goes out there with the intention of going all in and hitting their routines with the sake of the team in mind,” Glenn said. “I want to work up from the score that I got today. This is a great starting point to keep growing.”

Freshman Norah Flatley said she was disappointed with her individual score on bars, but she knew she had a responsibility to her team to stay positive and cheer them on no matter what.

“For bars, it wasn’t as good as it was last week, and I always want to improve,” Flatley said. “But, I will always be rooting for them and doing whatever they needed me to do and be there for each individual girl.”

Ross stumbled on her landing in her vault routine, causing her to post a 9.325 − the lowest vault score of the night.

“(Ross) didn’t do well on vault, which was uncharacteristic of her,” Kondos Field said. “She said she wasn’t sure that she should go on to beam, but I just knew that once she knew the team needed her to compete, she would do well. She ended up telling me, ‘I’m good, I’m good to go. I’ll do it for my team – I’d do anything for my team.’”

The Cardinal has yet to break 197 this season and posted its second lowest score of the season against the Bruins.

UCLA owns the longest active streak of consecutive meets in which they score 49 or above in each event, with 18 competitions and 72 straight events, which is also the 3rd longest streak in NCAA history, according to the Pac-12 Network.

The Bruins will meet No. 19 Oregon State on Saturday for their next away dual meet. They will be on the road until Feb. 16.