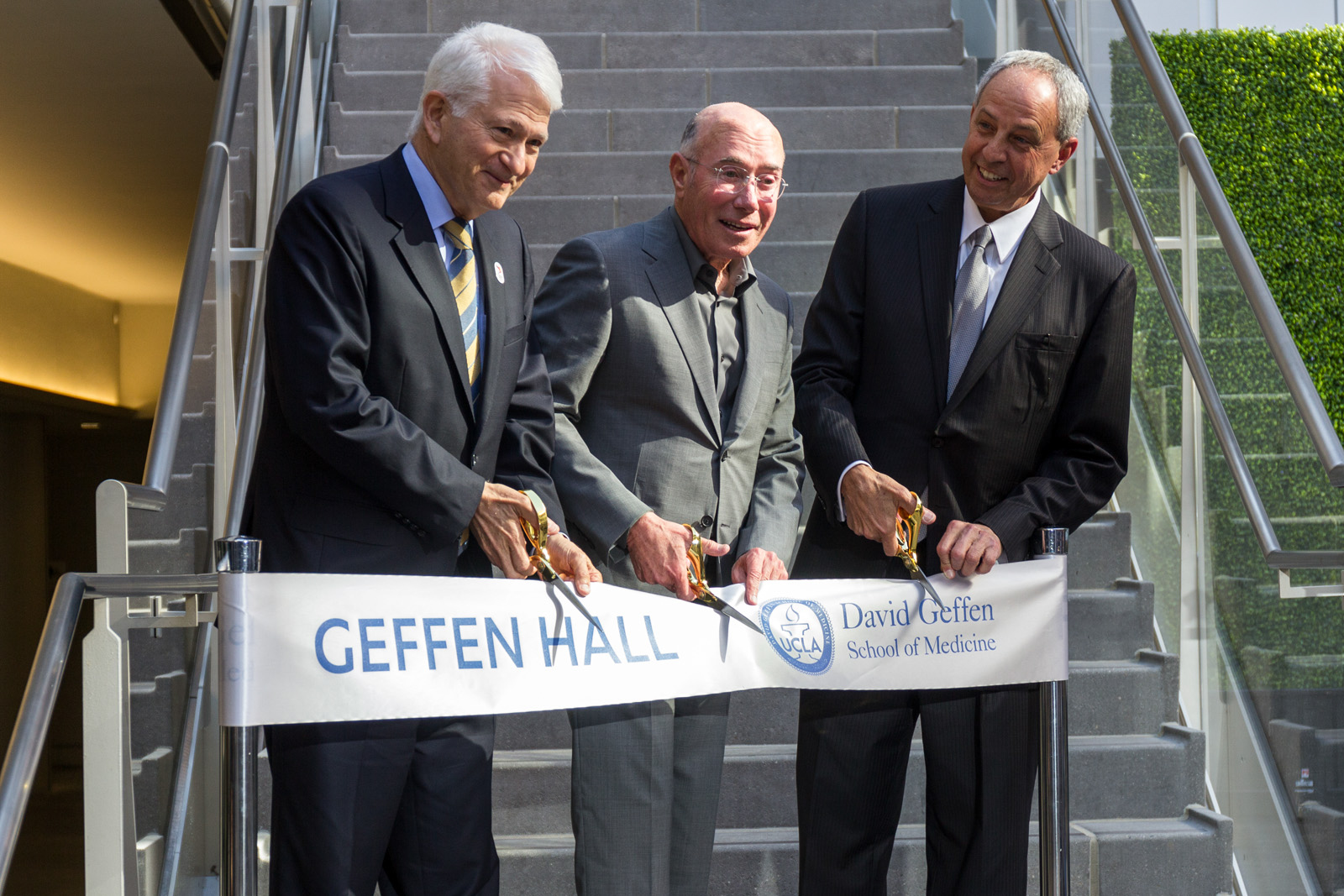 Donors like David Geffen, who gave $200 million to UCLA’s school of medicine and has his name on many university structures, might seem like an alternative to state funding. But the reality is that these individuals are only pursuing their passion projects at universities. (Daily Bruin file photo)

UCLA’s successful completion of its $4.2 billion fundraising goal came, naturally, with a glowing press release that venerated its major donors. The campaign, part of a trend of growing university donations, went toward cancer research, buying a historic theater in Westwood, expansion of the Anderson School of Management and the like.

Suddenly, the accumulated wealth of these donations has presented the idea that donors can be the saviors who make up for falling government contributions to public universities. But when debt-ridden students who are going hungry or are unable to access mental health resources look up to these individuals to save them, the only response they’re bound to get is: “Does my name come in gold or brushed Muntz?”

Billionaire donors aren’t necessarily giving to UCLA and America’s richest universities out of generosity. In a lot of cases, these are thinly veiled attempts to pay less in taxes or power moves meant to show off to the world. To America’s elite, universities are becoming a sandbox for trying out their personal passion projects.

Just take the instance of UCLA’s most well-known and infamous donation: the $100 million gift David Geffen gave the university to establish a middle and high school meant primarily for faculty’s children. That’s right, of all the charitable things Geffen could have done, anywhere in the world, he decided to build a fancy school in one of the wealthiest neighborhoods in Los Angeles.

Was generosity the main driver behind Geffen’s donation? Since the school charges about $30,000 in tuition, probably not. It was more likely an attempt by him to marginally increase the prestige of his namesake medical school, so that it could compete with the likes of Johns Hopkins and Harvard.

An attached private school would ostensibly help UCLA, and its medical school, attract the best faculty in the country. But for all the things that could have been done with $100 million, that’s hardly the most helpful gift, especially when the school charges its own tuition.

Oh, and the tax write-off he got from the donation was definitely another personal bonus for him.

The breakdown of UCLA’s successful centennial fundraising campaign further shows where donor priorities lie. Donors gave more than necessary to UCLA’s School of the Arts and Architecture, going 83 percent past UCLA’s laid out goal of $140 million. That’s understandable, since rich people are known to be obsessed with art.

On the other end of the spectrum, you have scholarship support, languishing at 47.5 percent of UCLA’s goal of $1 billion.

Surely, the donors who gave $4 billion in nonscholarship money should have been able to donate toward the goal that needed the money the most.

The reason that hasn’t happened is because donors don’t consider donating to scholarships to be sexy. If you’re a donor with money to burn in tax deductions, there’s less glory in spending it on impactful yet quickly forgotten scholarships, as opposed to buildings that will bear your name for years to come.

University administrators, for their part, just enable that behavior. Chancellor Gene Block, whose job is to make nice to donors to boost UCLA’s coffers, has bristled at such a characterization of Geffen-types.

“David Geffen is a true champion of UCLA who shares our goals and vision,” Block wrote in a letter to the editor slamming a former Daily Bruin editor for daring to say UCLA’s worship of Geffen was bizarre.

Really? Do donors like David Geffen actually share UCLA’s goals? In September 2015, a secondary school for sixth to 12th graders was probably not among UCLA’s greatest, or even top 20 needs.

Let’s put things into perspective. One of UCLA’s most pressing needs at the moment, aside from the debt-ridden or food-insecure students, is deferred maintenance costs. The University of California system has a $4 billion backlog in such costs. Some of that spending is extremely urgent, yet you don’t see donors doling out checks specifically for deferred maintenance.

For all his love of UCLA’s donor class, even Block himself has admitted donors don’t necessarily give with UCLA’s most pressing needs in mind.

“If you become too formulaic and too prescriptive, I think donors get turned off because, you know, they say ‘I want to give this,’ and then you’re trying to move them over to something else,” Block said in an interview with the Daily Bruin Editorial Board.

“But if we do it in a way that makes sense, where you couple things like an endowed chair with a graduate fellowship or similar undergraduate programs, or research support, that might work as well,” he added.

Yes, nothing says generosity like taking the “my way or the highway” approach while donating to a university. It makes sense that donors have some control over how their money is spent. The amount of control, though, is troubling. For example, at UC Irvine, billionaire Henry Samueli gave an exorbitant sum of $200 million to establish a center to research integrative medicine. In other words, a donor was able to get a public university to study a branch of medicine that incorporates the pseudoscience that is homeopathy.

The bottom line is these donations are transparent power moves, meant to virtue-signal to the public. Studies have found that people use such causes to show off their altruism and to show off that they’re rich. Worst of all, these mega-donations are a way for elites to signal their smarts. And before someone like Block denounces this as another ill-informed take from the Daily Bruin, it’s worth noting that last assertion was made by researchers, ironically, from the UCLA Anderson School of Management.

Some, like Block, would argue these donors have done a lot of essential good for colleges. They’re not even obligated to give a cent of their money to a public university like UCLA. Some have funded a number of scholarships for both undergraduate and graduate students. But while some charity is better than no charity, donors could easily find more productive ways to help society than to, say, create a high-end conference center.

Just look at the top 10 fundraising universities of 2017 – all of them are universities that meet 100 percent of domestic undergraduates’ financial aid. All of them have multibillion-dollar endowments. But our wealthy overlords decided to give more than $7.5 billion in 2017 to universities that are already loaded with cash. And when they’re not giving back to their elite circles, they’re trying to pursue their personal passion projects at public universities with debt-ridden students, like some kind of hobby.