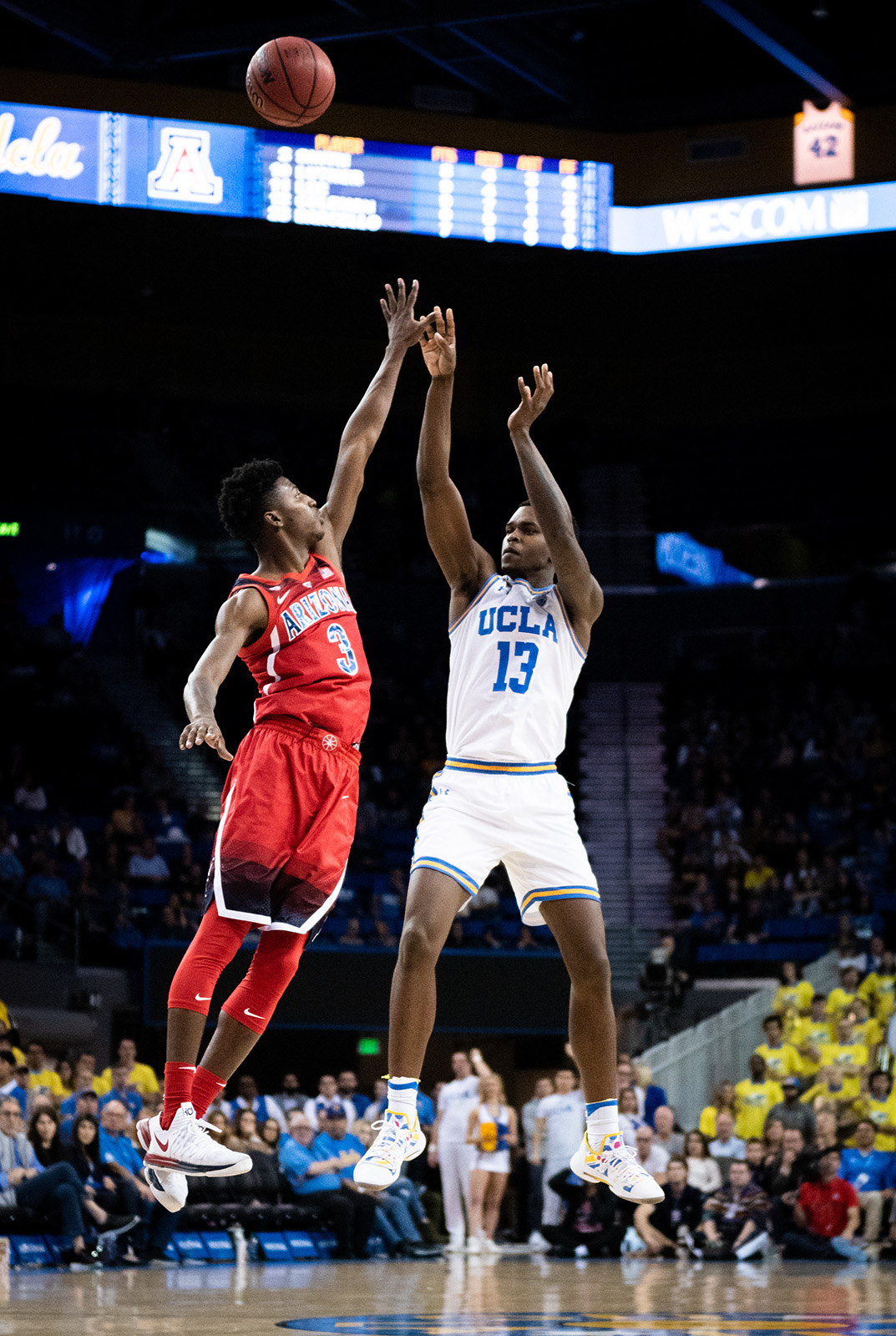 The Bruins were in the mood to break streaks Saturday night.

That scorer was sophomore Kris Wilkes.

The guard scored a career-high 34 points, the most by a Bruin not named Aaron Holiday since Bryce Alford dropped 37 on Jan. 12, 2017.

“I like that (Wilkes) wasn’t giddy about it. He was very professional,” said interim coach Murry Bartow. “He was really in a very confident zone.”

Wilkes was averaging 16.9 points per game coming into the matchup, but he had been shooting just 38.3 percent over his last three outings. On Saturday, he went 12-of-16 from the field and 5-of-7 from long range, including 8-of-9 and 5-of-6 marks, respectively, in the second half.

“Last game – after we lost – I was talking to the commentators and they were saying one game, it’s just going to fall,” Wilkes said. “I didn’t think it would be right now, but it’s just one of those times where it fell.”

Wilkes’ 75-percent shooting from the field was not much of an outlier either.

As a team, UCLA shot 57.9 percent from the field, compared to Arizona’s 33.3 percent mark. Freshmen guard Jules Bernard and center Moses Brown – who went 1-of-3 and 4-of-9 from the field, respectively – were the lone Bruins to shoot below 50 percent on the night.

UCLA went into halftime up by 13, but it rode Wilkes’ hot streak to a 26-point lead with 10:48 left on the clock and never looked back.

Sophomore guard Jaylen Hands notched his first double-double since Dec. 8 against Notre Dame, when he posted an identical stat line of 12 points and 11 assists.

“You can’t have an assist without your teammates making the shot,” Hands said. “(Wilkes) had a lot of them because he was on fire.”

Hands was not Wilkes’ only sidekick with a double-double, however.

Brown secured his with over 16 minutes left in the game, and he finished the night with 11 points, 15 rebounds, two blocks and two steals. The 15 boards were Brown’s most since the season opener, and Saturday was the second time he recorded multiple blocks, multiple steals and a double-double in one game.

“Every time they threw it to me, I think something good happened,” Brown said. “I got a lot of offensive rebounds and defensive rebounds, but that was just a credit to me just being active on both ends.”

Brown led both teams in rebounds, and the Bruins outrebounded the Wildcats 47-30.

UCLA held second-half leads in each of its last three games entering Saturday, but Hands said the Bruins need to come out of halftime like they did against Arizona in order to be a consistent team moving forward.

“As long as we’re focused and playing hard and communicating, staying together for full 40 minutes, I think we can play with anyone,” Hands said.

The Bruins – who trailed for just 18 seconds Saturday – were able to hover back over .500 in conference play and are now three games out of first place.