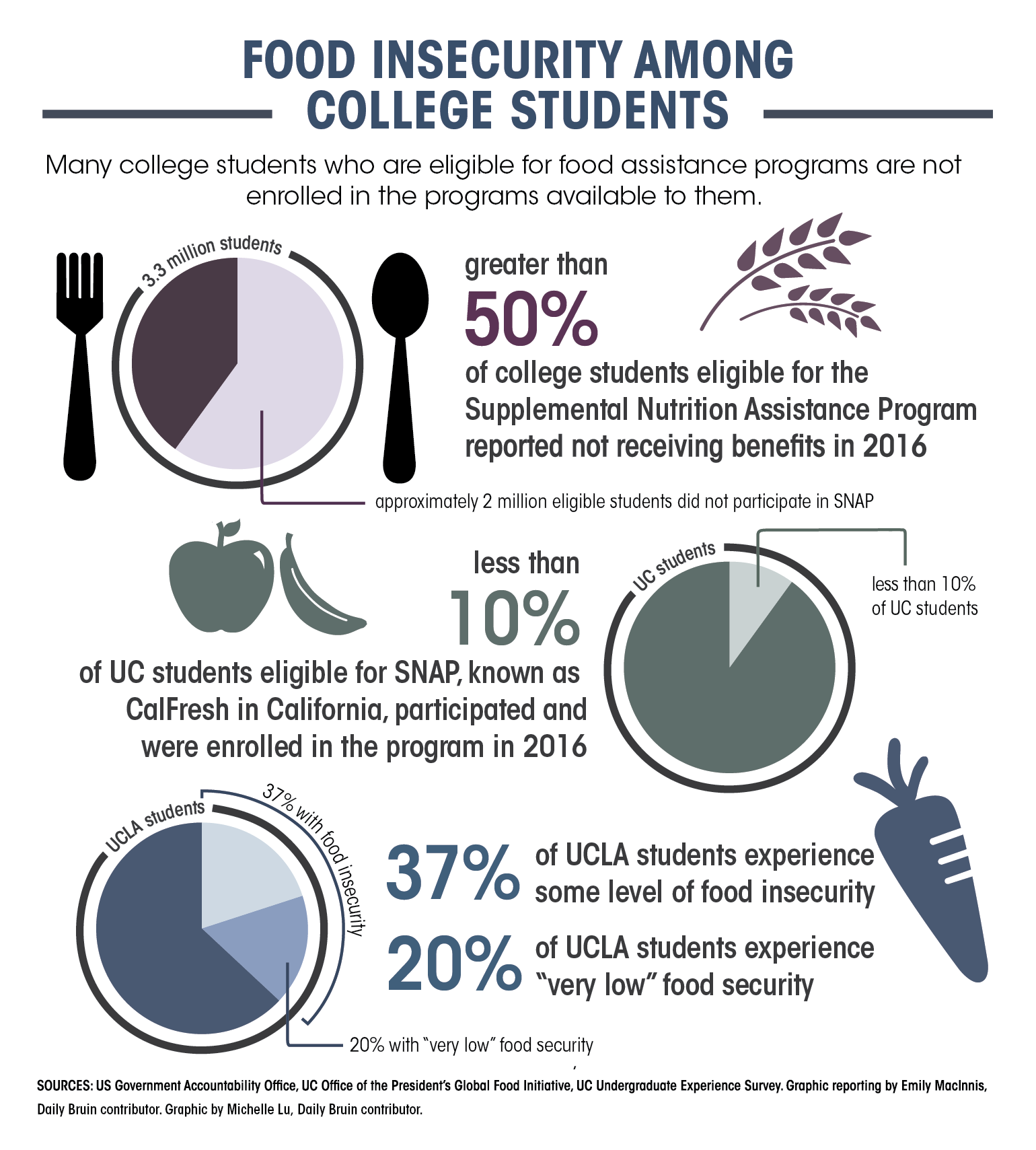 The GAO reported that 3.3 million college students in the U.S. in 2016 were eligible to receive benefits from the Supplemental Nutrition Assistance Program, a federal food assistance program. However, it reported less than half said they participated.

“One of the largest issues is that the financial aid package hasn’t been increased to match the demand of what students are needing to spend, in terms of books, and room and board, and food,” she said. “I think that’s something that’s going to come from the government, not necessarily UCLA.”

“We’ve been working with LA County, like the Department of Public Social Services, for training their social workers to just really be aware of the student population, … just making them aware of how financial aid packages work, like how most students can be eligible,” she said. “(We want to change) the face of someone who’s receiving government benefits – it’s just understanding that college students are also part of this population.”

There are several resources at UCLA available to students experiencing food insecurity, such as CalFresh and Swipe Out Hunger. Nevertheless, students and administrators believe the university can improve how it publicizes these services to the student body.

The University of California Office of the President Global Food Initiative estimated that in 2016 less than 10 percent of UC students eligible for SNAP, known as CalFresh in California, were enrolled in the program. It also reported that food insecurity across the UC system disproportionately affects low-income, underrepresented minority and LGBTQ students.

CalFresh is an organization that works to combat food insecurity on campus by facilitating interactions between social workers and students in order to enroll students in CalFresh. Students who meet eligibility requirements, such as those who work an average of 20 hours a week or receive a Cal Grant, can enroll in CalFresh. The program gives students a stipend of up to $192 per month to spend on food, Dieu said. She added CalFresh meets with 300 to 400 students each quarter to enroll in the program.

Lea Le Rouzo, UCLA CalFresh outreach intern and a third-year environmental science student, said she believes the program should have a more permanent position on campus in order to enroll more students in CalFresh.

“I think UCLA could benefit from having someone more permanent working here for CalFresh, just as part of their jobs, so it’s not student-run,” she said. “Student-run organizations always have the possibility of running out, or, as powers get passed down, you (lose) consistency.”

Devon Graves, a UC student regent who helped create the UC Board of Regents Special Committee on Basic Needs, has advocated for allocating funding in the UC’s budget for basic needs services on campuses. He said he believes campuses should establish strong relationships with county officials in order to increase CalFresh enrollment among students.

“When it comes to CalFresh, it’s from the county, so it’s important that UC campuses have strong relationships with county offices to ensure good communication with CalFresh services,” he said.

Swipe Out Hunger is a student organization that collects students’ unused meal plan swipes at the end of each quarter to donate to students in need as meal vouchers, as well as unsold produce from local farmers’ markets to give to students.

Hannah Brenchley, senior adviser for Swipe Out Hunger and a fourth-year political science student, said they collect between 30,000 and 40,000 swipes per year, almost all of which are used by students.

Brenchley added she believes UCLA can combat food insecurity by publicizing food assistance resources during freshman orientation to increase awareness. She said the group has reached out to new student advisers to tell incoming students about these resources.

“I wish that CalFresh eligibility was a part of your intake as a freshman,” she said. “When you come to school, they’re like, ‘(If) you got a student job or if you meet these requirements, then you can get this much money and food a month.’”

Dieu said she believes some students are deterred from signing up for CalFresh because it is a government program.

Graves and Brenchley said increasing awareness of food insecurity and resources available could help normalize the issue on campus and alleviate its stigma.

“(Food insecurity is) a topic that is growing but is definitely something we need to have increasing conversations about,” Graves said. “It’s something that students face, and there are resources available to help students who are impacted.”

Brenchley said she believes many recipients of food assistance heard about such resources by word-of-mouth, instead of from the university. She said the university should better publicize its resources in order to get more students enrolled.

Le Rouzo said CalFresh has worked with the UCLA Financial Aid and Scholarships Office to send emails to students about CalFresh and its eligibility requirements. She said she hopes to continue to spread awareness of CalFresh and to destigmatize the issue of food insecurity on campus.