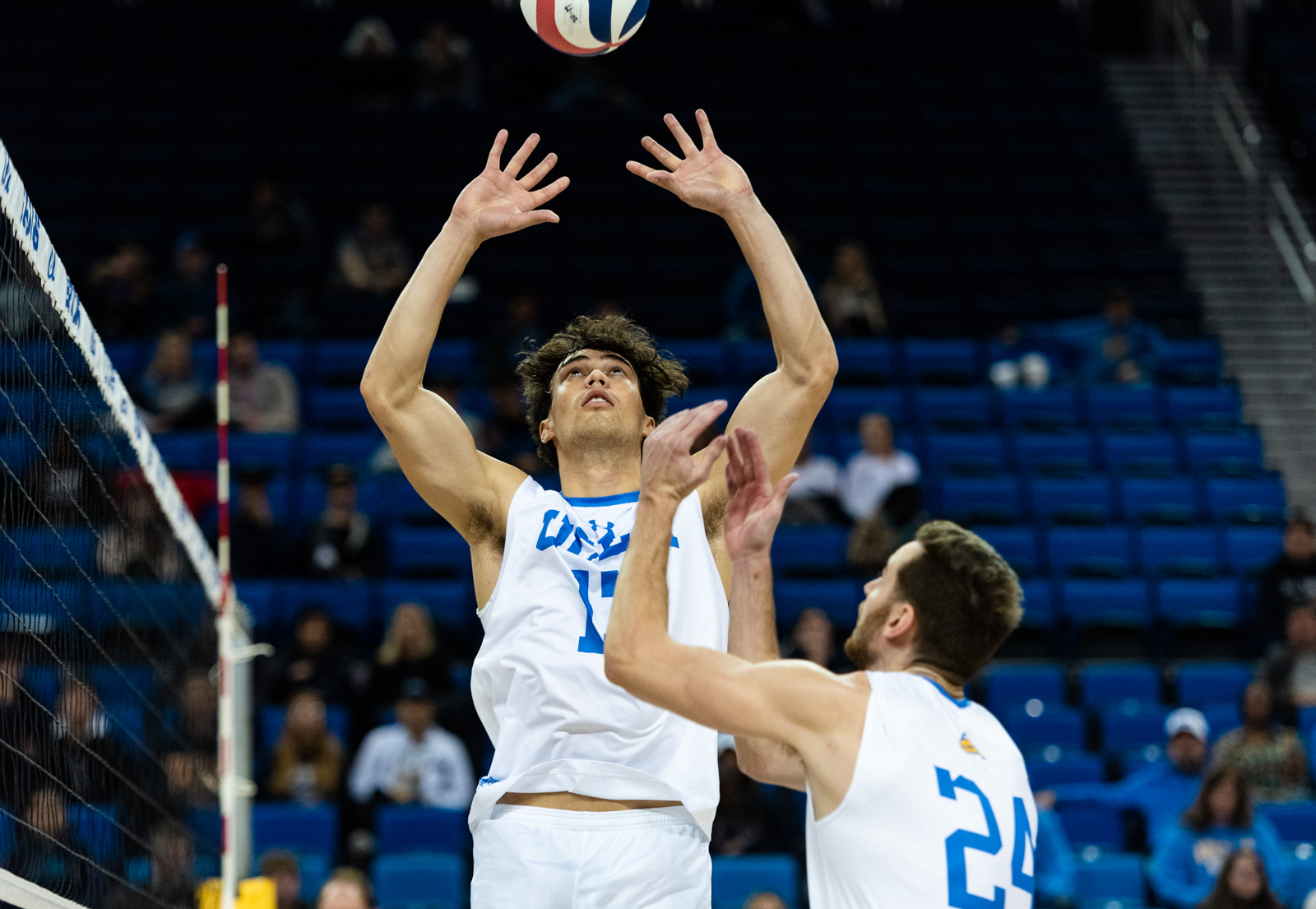 Senior setter Micah Ma’a was one of the starters who faced Long Beach State in the NCAA championship final last season. Ma’a has posted 199 assists through six games this season. (Amy Dixon/Photo editor)

The Bruins have a chance to avenge their loss in last year’s NCAA championship final.

No. 6 UCLA men’s volleyball (5-1) will face No. 1 Long Beach State (5-0) Saturday at Pauley Pavilion in a rematch of last year’s title match that saw the 49ers claim their second championship in school history.

UCLA coach John Speraw said fans can expect Saturday’s contest against the defending champions to be the most electrifying home match of the regular season.

“There are going to be a lot of exciting volleyball players on the court,” Speraw said.

The Bruins’ starting roster is noticeably different than the one that was a set away from winning the national title last season.

Three of the starters from the 2017-2018 roster graduated, leaving senior setter Micah Ma’a, senior outside hitter Dylan Missry and junior middle blocker Daenan Gyimah as the remaining starters on team .

Gyimah said the new additions to the team, including redshirt junior opposite Brandon Rattray and junior outside hitter Austin Matautia – both transfers from the University of Hawai’i at Manoa – have helped change the dynamic of the team’s play in a positive way.

“It’s unbelievable,” Gyimah said. “We can play a lot faster, which is harder for them to block, and they can both bang the ball. (Matautia) can pass and play defense, it’s great.”

Many of the 49ers the Bruins faced in last May’s championship final will once again take the court. Six of the eight Long Beach State players that appeared in all five of the match’s sets are on the 2019 roster.

These returners include the 2017-2018 leaders in kills, outside/opposite hitter Kyle Ensing, outside hitter TJ DeFalco and the current national leader in assists per set, setter Josh Tuaniga.

Speraw said Long Beach State’s experience on the court will force UCLA to be at the top of its game.

“We’re going to have to play our best volleyball of the season at this point,” Speraw said. “In terms of their execution of systems and fundamentals, they’re just beyond where we are right now.”

Gyimah said the Bruins will need to improve in serving if they are to challenge the defending national champions.

UCLA currently leads the country with 127 service errors. The 49ers committed 19 service errors in comparison to the Bruins’ 26 in last year’s championship final.

Ma’a said that a win against Long Beach State would help the Bruins moving forward.

“That I can say would be pretty cool,” Ma’a said. “It would be really good for morale.”

The match will begin at 7 p.m. Saturday night at Pauley Pavilion.