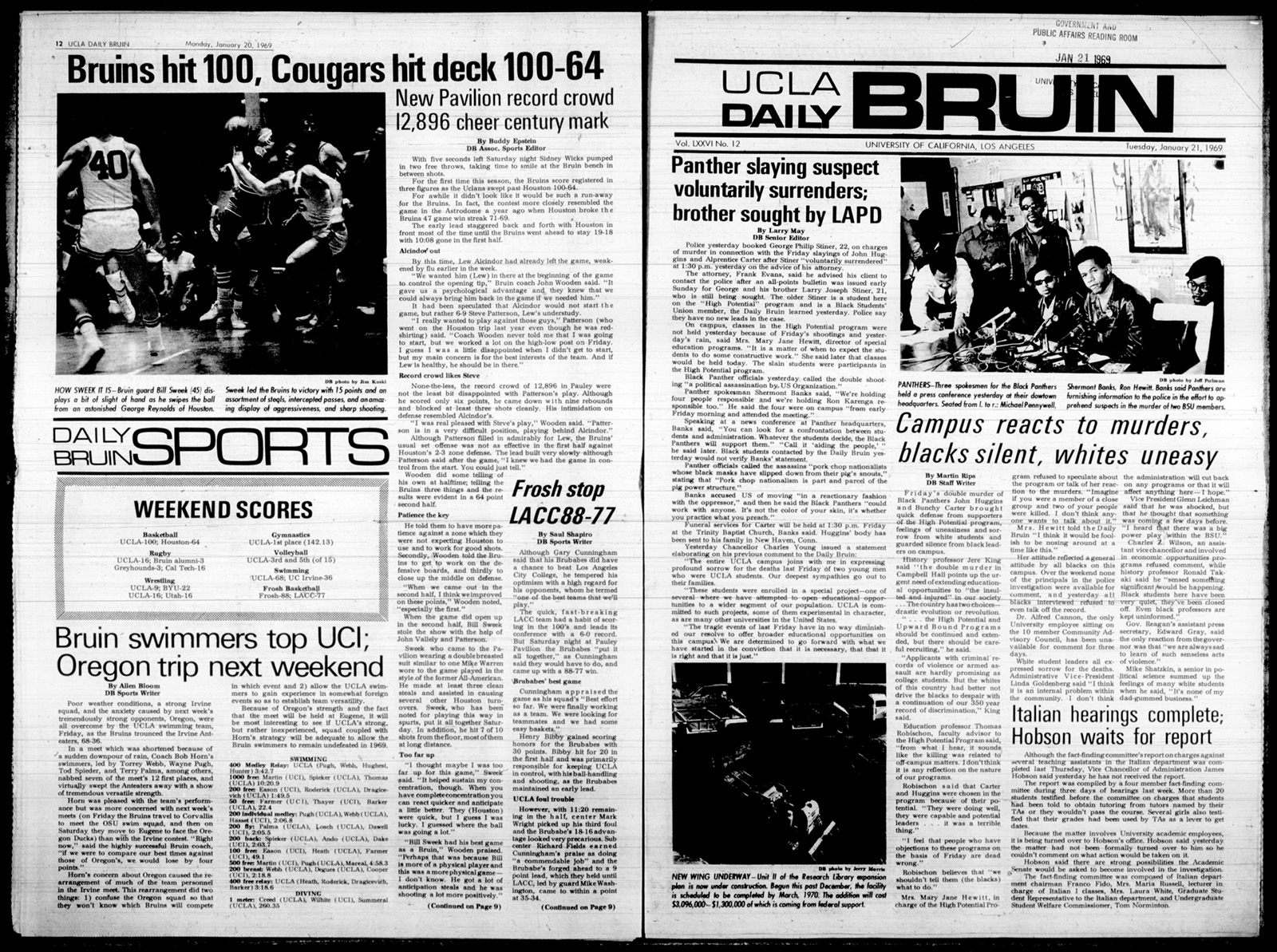 Tucked in between a couple of shrubs in the garden near Campbell Hall’s east entrance lies a large, gray stone. Barely noticeable to the hundreds of students that pass by every day on their way to and from Bunche Hall, it reads “Carter-Huggins 1969.”

The two Black Panther leaders were members of the Black Student Union, as well as a part of the High Potential Program, a program meant to increase opportunities in higher education for minority students.

Tension between the Black Panthers and the US Organization was at the heart of the shooting. The US Organization and the Panthers were, at the time, vying for control of black student organizations at the collegiate and high school level. Simultaneously, the FBI was attempting to stoke tensions between the two groups through efforts that included its largely illegal surveillance program, COINTELPRO.

In January 1969, the two groups backed different individuals for the role of director of the newly created Afro-American Center, now known as the Ralph J. Bunche Center for African American Studies. The US Organization put forward a black psychologist with minimal background in academia as its choice. Chancellor Charles Young initially was willing to accept the choice, until a dispute arose over salary. Then, BSU announced it had reservations and wanted a different candidate, one with both an academic background and commitment to the black community.

On Friday, Jan. 17, 1969, about 150 BSU members met in Campbell Hall to talk about the qualifications for the director. After the adjournment of the meeting, Harold “Tuwala” Jones entered the room and Huggins confronted him about the harassment of a fellow Panther. As a fight broke out between the two, Carter tried to intervene. Then Claude “Chuchessa” Hubert came in and shot Huggins in the back. Huggins, who was armed, fired a couple of shots back as he fell, wounded.

Carter attempted to find cover behind a chair but was also shot by Hubert. “Chuchessa shot through the chair and killed him instantly,” recalled J. Daniel Johnson, a student who was present in the room, in 2008.

In seconds, it was all over and two men were dead.

After the shooting, university police worked in 12-hour shifts until Wednesday, Jan. 22. Police issued a bulletin announcing George Stiner and Larry Stiner as suspects, after witnesses had identified them at the scene of the shooting. George Stiner, who was also a BSU member and a part of the High Potential program, surrendered to police on Monday afternoon. His younger brother Larry surrendered later that night. The brothers eventually received life sentences based on charges of conspiracy to commit murder. Hubert, the suspected murderer of the two men, was never caught.

In its private communications, the FBI reacted to the murders with some satisfaction. “It would appear that the above activity will even further split the factions of the US Group and the BPP,” reads a memo from an FBI special agent in charge office in San Diego dated Jan. 20.

“Personally we are deeply grieved by the death of these two young men who were our students,” his first statement said. “The tragic events of last Friday have in no way diminished our resolve to offer broader educational opportunities on this campus,” he added in the second statement.

“They were doing well, they were capable and potential leaders … it was a terrible thing,” said Thomas Robischon, a faculty advisor to the High Potential Program.

Unsurprisingly, most students the Bruin reached out to, especially black students, did not want to speak to the paper so soon after the shooting. According to the an article from Jan. 21, white students largely wanted to keep themselves out of the matter, with their reaction being summed up by student Mike Shatzkin, in quintessential 60s fashion: “It’s none of my dad-gummed business.”

Huggins’ body was sent to his family in New Haven, Connecticut, while the funeral for Carter was held on Jan. 24. Among those in attendance were James Baldwin and Kathleen Cleaver.

The campus community quickly recovered following the incident, with BSU resuming meetings on Jan. 31. The High Potential Program resumed classes on the Tuesday after the shooting. Half a century later, the program still lives on. UCLA consolidated it with the Educational Opportunity Program in 1971 to create the Academic Advancement Program. The AAP currently serves over 5,000 students from underrepresented groups at UCLA. And Campbell Hall still serves as the hub for this program.

But for years after the shooting, there was no marking or sign to denote that such an incident had taken place in Campbell Hall. But the shooting hasn’t completely dropped out of the student body’s collective memory. Since 1999, family and friends of Carter and Huggins, and other students have gathered annually at Campbell Hall to remember the two. In 2010, students hung a plaque in front of Room 1201 in honor of them. And students have called regularly for Campbell Hall to be renamed Carter-Huggins Hall.

So far, UCLA administration has ignored such requests. After all, they were just activists, not rich megadonors filling UCLA’s coffers. So for now, the stone in front of Campbell Hall will continue to memorialize Carter and Huggins.