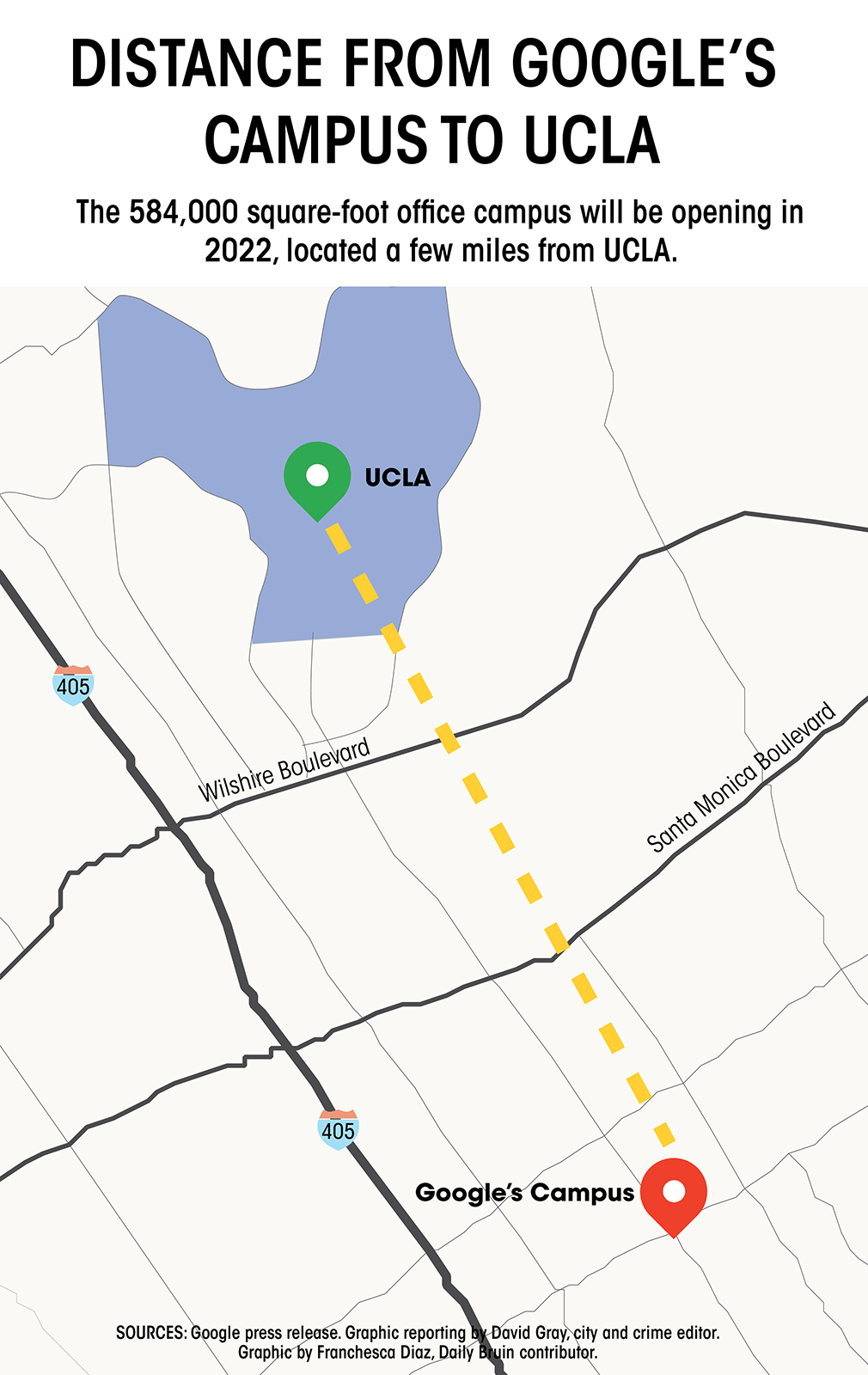 Correction: The original version of the graphic accompanying this article incorrectly indicated the location of the site for Google's new campus.

Google will establish a new campus near UCLA in two years.

Google has leased the converted Westside Pavilion shopping mall in West Los Angeles, now called One Westside, and plans to turn it into its new 584,000-square-foot campus. The 14-year lease will begin when construction, which will start later this year, is completed in 2022, according to a Google press release.

Owned by real estate companies Hudson Pacific Properties and Macerich, the property is less than 3 miles away from Century City, Westwood, Culver City and other neighborhoods in West Los Angeles.

The architecture firm Gensler has completed the designs of the new campus and plans to repurpose much of the former mall’s architecture for the new building. The campus will also feature a rooftop space with a garden and bridge access to the Landmark Theatre and Westside Tavern, according to the press release.

Los Angeles City Councilmember Paul Koretz, who represents the council district that includes West Los Angeles, said he thinks the new campus will bring new tech jobs to both students and West LA residents. He added he thinks the addition of the campus would be a good update for the city because the former mall had been struggling.

Koretz said he doesn’t think the office will contribute to traffic because of its proximity to several major public transportation hubs, including the Expo Line’s Westwood and Rancho Park station. The campus is also close to major bus lines on Pico Boulevard and Overland Avenue and is a short distance from the Metro Purple Line, Koretz added.

Koretz added he hopes this will start a new tech wave in the district and that he thinks Google chose a location close to UCLA to capitalize on students.

“Hopefully it will pull particularly from some of our sharp students in the UCLA community and give them opportunities for jobs while they’re attending UCLA, (and) once they’ve graduated from UCLA,” Koretz said. “I don’t think it’s a total coincidence that they chose a location that is not that far from UCLA.”

The new campus would also lead to increased property values in the area, which could raise costs for those nearby, Koretz added.

“Property value increases cuts both ways. Some people will be happy about that,” Koretz said. “Some will find it more difficult to purchase a property in the immediate vicinity.”

Anshul Aggarwal, a fourth-year computer science and engineering student and former president of Bruin Entrepreneurs, said they think the new campus will bring job opportunities and encourage more tech companies to move into the area.

“It’s definitely an interesting move, and it makes me hopeful to see more investment in the LA tech scene,” Aggarwal said. “Hopefully with the move we will see more visibility and collaboration at UCLA with Google and YouTube as well, and help elevate the current Silicon Beach ecosystem.”

Ethan Huang, a first-year computer science student, said he was curious to see how competition would increase for students applying to the limited positions at Google.

“I don’t know the effects on a large scale but it will be interesting to see how there will be increased competition amongst students who want to work at a reputable company that’s nearby with good compensation,” Huang said.

Koretz said the district and city planners will partner closely with Google to develop the property.