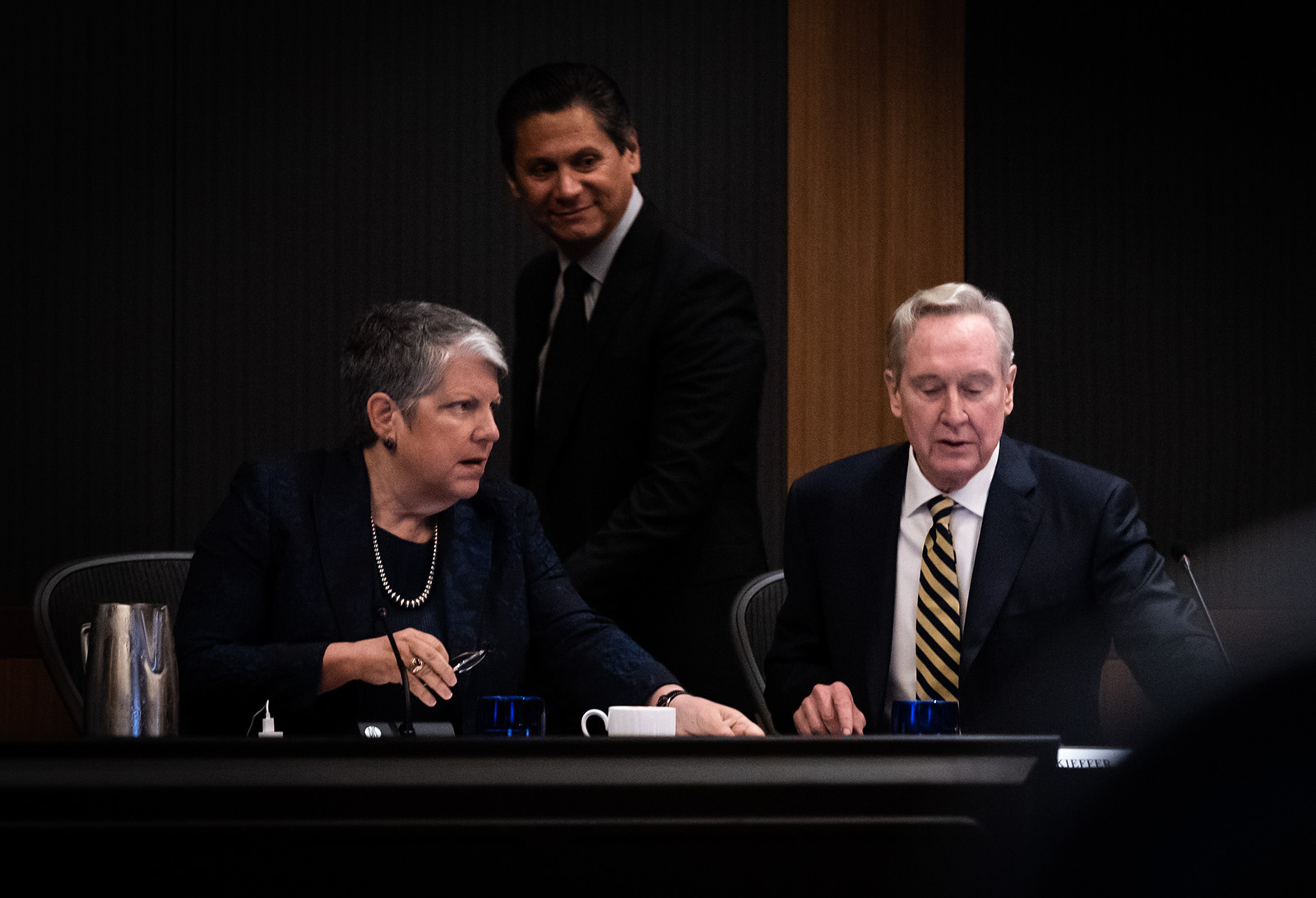 The possible elimination of the student advisor position on the UC board of regents has led to debate between student leaders in the UC system. The position was created as a pilot program in 2016 to increase student representation on the board. (Kristie-Valerie Hoang/Daily Bruin senior staff)

The UC Student Association urged the UC Board of Regents to terminate the student advisor position Sunday, saying that other student-held positions are more effective in providing student representation.

Regent Richard Sherman sent a letter in December recommending the regents end the student advisor pilot program, saying that it did not add more student input than the other student positions on the board.

After criticism from students, the recommendation to end the program was replaced with one to continue it until 2020 and work on the program’s current issues.

The decision whether to keep the student advisor position on the Board of Regents has led to debate between student leaders.

UCSA voted Sunday in support of ending the program. UCSA President Caroline Siegel-Singh wrote on behalf of the UCSA that the regents should instead focus on expanding the roles of positions that existed before 2016, such as Committee Observers and Student Advocate to the Regents, or StARs.

“From my own experience, we’ve found the StARs to be very effective. Last year myself and Rigel Robinson, a UC Berkeley student, went around and started getting votes for the tuition vote delay,” Siegel-Singh said. “We also want to be able to bring more nonstudent-government students into these spaces so we’re working with our professional staff to improve our preparation of all StARs.”

Aidan Arasasingham, the director of legislative affairs in the Undergraduate Students Association Council External Vice President office and a second-year global studies student, said he thinks the position does not give the student advisor the resources necessary to succeed.

Arasasingham said the student advisor position is not accessible to low-income students because it is unpaid. He added that the position only receives certain travel reimbursements and does not have access to all the connections the student regent does. The student regent is eligible for part-time UC-compensated employment.

“Because of the way that it’s outlined, the way it’s set up, students will inevitably fail … because of the lack of resources provided to the position,” Arasasingham said.

He added that UCSA is in support of other positions that students already have access to, such as the StAR program. The program allows students from any UC campus to receive resources and funding to attend regents meetings to advocate for certain causes.

“What we’re advocating for is really more student representation on the Board of Regents,” Arasasingham said.

Arasasingham added that the student advisor has to speak on a variety of issues ranging from student engagement to investments, but no one student should be expected to have the knowledge or resources to speak on all these issues.

Instead, he said UCSA is asking to allow for committee observers in each regents committee to allow students who have a strong understanding of issues discussed by the committee to provide feedback.

Huang said in a letter to the regents Monday that he thinks the position should not be eliminated because it was not given a proper evaluation and it has fulfilled its initial goal to provide more student representation.

Rafi Sands, former student advisor and UCLA alumnus, said he does not think UCSA’s statement is reflective of most UC student leaders’ opinions on the program.

Sands said the student advisor has helped with multiple initiatives, including launching the UC Advocacy Network student ambassador program, which gives students the opportunity to travel to Sacramento and meet with state legislators. He added that he was able to host a UC budget forum at UCLA which around 75 students attended.

He added the student advisor successfully created a database with contact information of student leaders from each campus who could help the regents with specific policies, a system that was used multiple times during his year as student advisor.

Huang added in an additional email statement Monday that he thinks there was a lack of transparency on the part of UCSA, suggesting the student association was participating in private negotiations with the regents in an attempt to change or remove the item to extend the student advisor position from the regents’ meeting agenda this week.

Siegel-Singh said in response to Huang’s statement that UCSA does not have the ability to change the agenda.

“We have no power over the agenda,” Seigel-Singh said. “It’s at the discretion of the regents.”

The position, which was created in 2016, answered calls for more student representation on the board.

However, unlike the student regent, the advisor cannot attend closed meetings and does not have voting power. The California Constitution only allows for one student regent, requiring a state ballot measure to add a second student regent position, which would require a costly statewide campaign.

Former Gov. Jerry Brown opposed the idea of a second voting position in 2016, so the compromise of a student advisor pilot program was formed. Former Student Regent Avi Oved first proposed the idea for the program in 2015. Sands, who was Oved’s director of policy at the time, became the first student advisor in 2017.

The regents are set to vote on whether to extend the position Wednesday, with their most recent statement recommending the extension of the program.