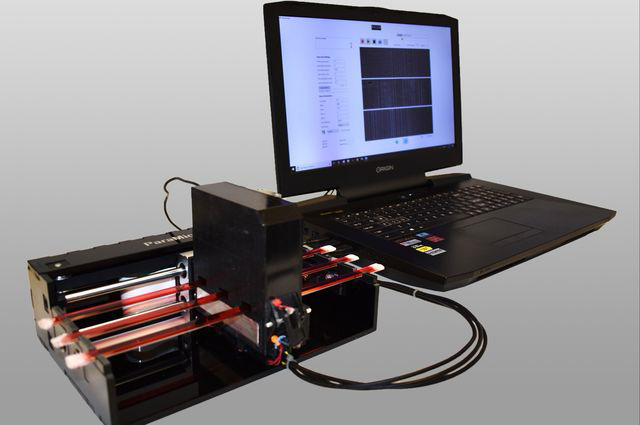 UCLA researchers developed a device able to detect parasites in blood with relative ease and at a low cost. Hatice Ceylan Koydemir, a postdoctoral researcher and co-author of the study about the technology, said the low cost could make it more accessible in areas of Africa. (Courtesy of UCLA Newsroom)

UCLA researchers have developed a device that detects the presence of certain parasites in blood or other bodily fluids.

The device has the ability to detect small parasites, such as Trichomonas vaginalis, which can cause trichomoniasis, a common sexually transmitted disease. The device also detects a parasite responsible for sleeping sickness, a disease common in sub-Saharan Africa and Latin America that can cause high fevers and later lead to death.

Aydogan Ozcan, the associate director of the California NanoSystems Institute, and Kent Hill, a professor of microbiology, immunology and molecular genetics, discovered that it is more efficient to identify a parasite’s location in the blood by analyzing its movement rather than its image.

To identify a parasite’s location, researchers illuminate a blood sample with a laser light and record a video of the holographic patterns present, which contains the time-varying image pattern coming from the locomotion of the parasite. The movement of the parasites creates a signal, which is then analyzed by a 3D-motion analysis algorithm and machine learning to determine the number of parasites using artificial intelligence, which was developed by students in the Ozcan group.

Deep learning is used to analyze these “hot spots” and determine whether a parasite actually exists in a particular area.

Traditionally, researchers use a light microscope to detect the presence of parasites. However, because blood is very dense and difficult to see through, it can be difficult to detect such small organisms. Using the parasite’s movement rather than its image allows researchers to detect parasites in dense fluids with relative ease.

Yibo Zhang, a doctoral student in electrical and computer engineering, and co-author of the study, said it is very hard to see a small, often transparent parasite in a large volume of blood.

“Each milliliter of blood has billions of red blood cells and millions of white blood cells,” Zhang said. “If you look for a few tiny … parasites within all those cells, … it will be very difficult to see (them).”

The concentration of parasites inside blood can be very low, about 100 per milliliter or even lower, which makes the detection process slow and inefficient. Additionally, the fact that parasites can be transparent can make it difficult to detect them using an ordinary microscope.

This is not the first device that uses the concept of motility to detect parasites in the blood. Daniel Fletcher, the chair of the bioengineering department at UC Berkeley, developed a similar device in 2015. However the device developed at UCLA may be more cost-effective.

“Some of these devices have similar performance, but they take longer to prepare the sample and get to the answer. Others are very expensive or bulky,” Ozcan said. “This device is mobile, cost-effective, nonbulky and rapid.”

The prototype of the device is priced at around $1,800. Hatice Ceylan Koydemir, a postdoctoral researcher and co-author of the study, said the low cost could make it more accessible in areas of Africa that are affected by parasites this device can detect.

The device’s simple setup also allows people who are not trained as parasitologists to recognize a parasite in the bloodstream, Hill said.

“You don’t need an expert, you don’t need electricity, and so it is reasonable to use it in Africa,” Koydemir said.

Additionally, the buffer solution used for the device does not need to be refrigerated, so it can be used in the field at room temperature.

“It could have an impact on diseases where organisms are in the blood, so diagnosis is the key to keeping things under control,” Hill said.

The device could also be used for research purposes to help people understand exactly how the parasites move, allowing researchers to develop new ways to treat diseases.

“To have the ability to interconnect like this and to join forces from different perspectives is very powerful,” Hill said. “And I think that’s one of the things I take home from the entire interaction.”