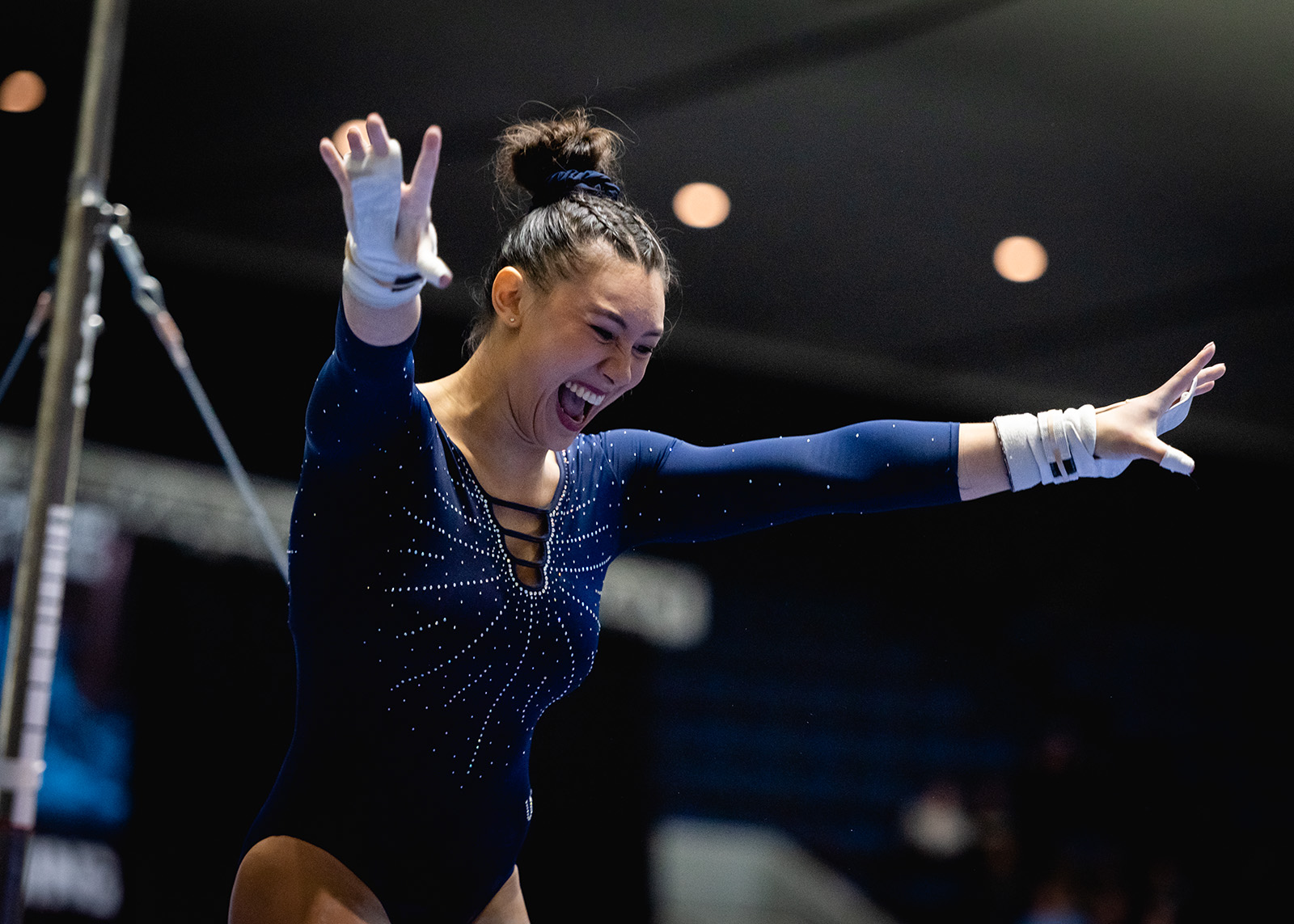 Frazier – who made her collegiate debut on vault and floor exercise Saturday – was recognized as the Pac-12 Freshman of the Week. She scored a 9.825 on vault and a 9.925 on floor. Frazier also led off for the Bruins on the uneven bars and recorded 9.925 – nearly a tenth of a point higher than the 9.875 she scored against Nebraska to open the year.

Ross recorded her first perfect 10 of the year on the uneven bars to win the Pac-12 Gymnast of the Week honor. The score marked Ross’ fourth perfect score on bars and sixth overall. She also notched a 9.875 on vault, a 9.900 on balance beam and a 9.925 on floor exercise to win the all-around at the Collegiate Challenge.

Ohashi topped off the Bruins’ first-place win Saturday with a perfect floor performance. This week’s Pac-12 Specialist of the Week recorded the first 10 of the year on floor exercise. As of Tuesday afternoon, Ohashi’s floor routine had already garnered over 35 million views online.

UCLA will return to action Monday against No. 11 Arizona State.

The regular season is still a month away, but hype is burning strong for the Bruins.

D1Baseball released its first rankings of 2019, and UCLA baseball came in at No. 5 – higher than any other Pac-12 or West Coast program – good for its highest preseason ranking since 2015. The nod from D1Baseball marked the third time the Bruins have been awarded a top-five ranking ahead of the 2019 season.

The only other Pac-12 teams in the top 25 are No. 8 Oregon State – the reigning College World Series Champions – and No. 12 Stanford.

UCLA now has three ranked nonconference opponents on its schedule this season. No. 17 Michigan and No. 18 Oklahoma State will come to Los Angeles for the Dodger Stadium College Baseball Classic in March. On April 23, UCLA will visit No. 25 Cal State Fullerton for a Tuesday night matchup.

D1Baseball wrote that the Bruins’ three preseason All-Americans – juniors first baseman Michael Toglia, second baseman Chase Strumpf and left fielder Jeremy Ydens – were going to be the foundation for one of the most dangerous offenses in the country. UCLA ranked 11th in doubles per game last season and is returning seven of its nine starters from a season ago.

On the mound, UCLA announced last week that former Bruin pitcher David Berg – a member of the 2013 championship team – would be returning to Westwood as a pitching coach.

Over a dozen other UCLA baseball alumni will return to Jackie Robinson Stadium on Jan. 26 for the team’s annual Alumni Game.

The Bruins may have fallen short of a national championship, but at least they’re doing well in school.

A program-record 11 players earned MPSF All-Academic honors for UCLA men’s water polo, surpassing the mark set in 2003 when the program had eight Bruins receive the accolade.

UCLA fell 8-7 to crosstown rival USC in the semifinals of the NCAA championship, but the eventual national champions only had two players receive MPSF All-Academic honors during the 2018 season.

With freshmen ineligible for the award, senior attacker Austin Rone earned the All-Academic honors for the third consecutive season after tying for sixth in scoring for UCLA with 31 goals.

Redshirt junior Alex Wolf earned the honor for the second straight year. The 2017 NCAA championship MVP logged 189 saves as the starting goalkeeper for the Bruins this season.