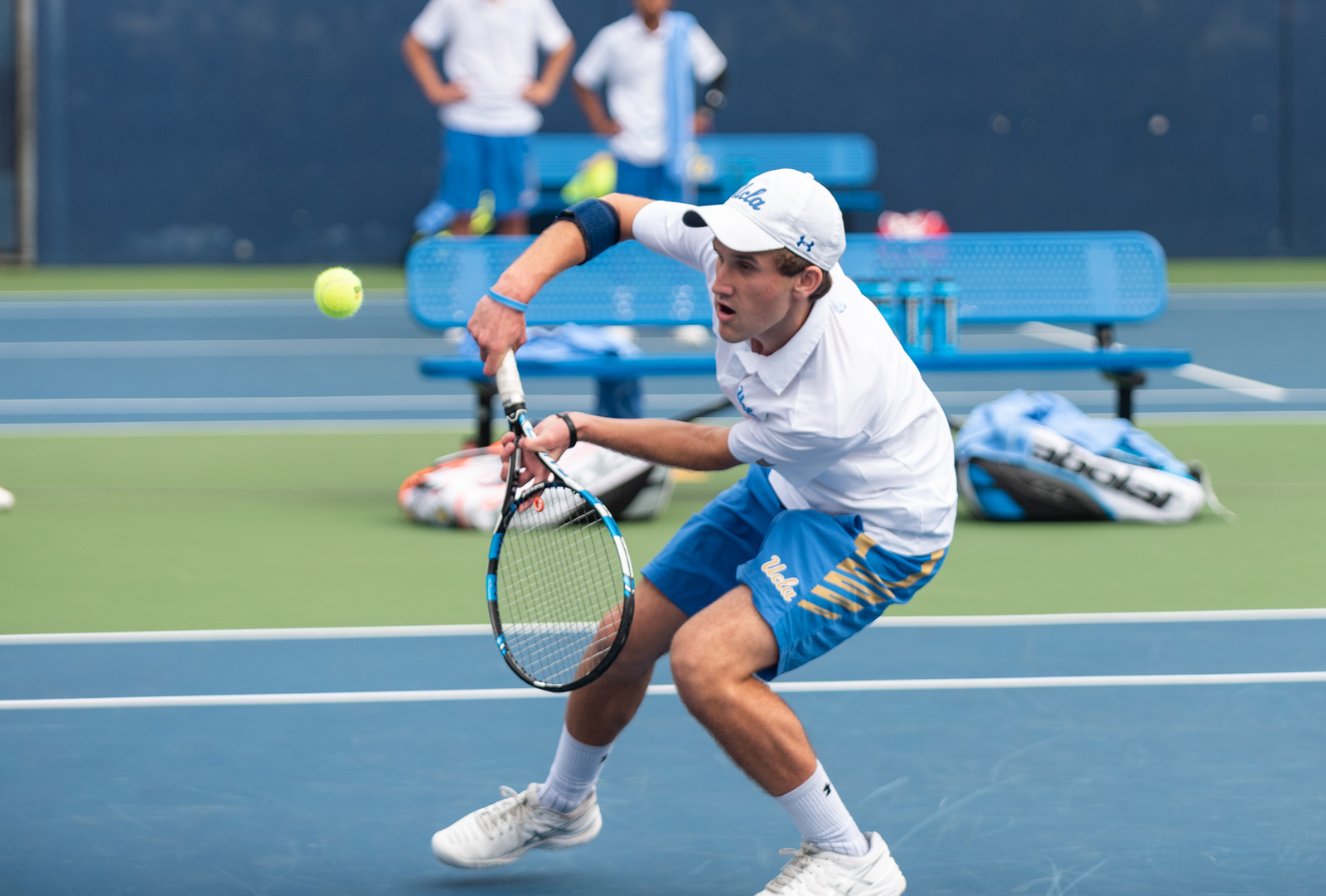 Junior Ben Goldberg posted a 10-6 singles record and a 9-7 doubles mark in 2017-2018. Goldberg fell in the second round of the singles bracket this weekend. (Daily Bruin file photo)

The Bruins are inching closer to the start of regular season.

While Hance and Rapp have had plenty of preseason outings, Goldberg and Bellamy did not take the court in fall play.

Bellamy, who is from Pacific Palisades, California came to UCLA as a blue-chip recruit. Meanwhile, Goldberg is back for his third season as a Bruin after finishing last year’s campaign with 10-6 record in singles and a 9-7 doubles record.

“It’s always good to get matches in before the season,” Goldberg said. “I’ve been playing really well, and I think I played aggressive tennis and with a good mentality.”

All four Bruins competed in both the singles and doubles draw.

The doubles draw saw the team of Goldberg and Rapp dispatching Arizona’s Carlos Hassey and Aaro Pollanen by a score of 6-2, while Bellamy and Hance were defeated, 6-2, by Georgiy Malyshev and Collin Shick of North Carolina State.

“(Rapp) and I have played doubles together since we were ten years old,” Goldberg said. “We know each other, we have really good chemistry with one another and we know how to play well together. We played aggressively and never gave our opponents a chance.”

The second round of doubles saw both UCLA pairs facing opponents from the University of San Francisco. The team of Goldberg and Rapp again emerged victorious, winning by a score of 6-2 against Romeo Jivraj and Ryan Marker. However, Bellamy and Hance were unable to find the same success and were defeated by USF’s Phuc Huynh and Paul Giraud, 6-4.

“The first guy I played, I knew nothing about, and that’s always tough – but, I think I adapted my game style and executed the big points well,” Rapp said. “My second match was against Arizona’s No. 2 player, and I felt that I didn’t have it the way I did the first day. All credit to him, though, he played really good tennis.”

“(Hance) seems to be playing well, he’s in good shape, and his injury seems to be fine,” Martin said.

Martin also said both Hance and Rapp seemed to be match ready for the season.

“The next tournament at Sherwood is going to be a big indicator for me to see where everybody really is and just how sharp they are,” Martin said.

That tournament will take place this weekend at the Sherwood Country Club in Thousand Oaks, California.