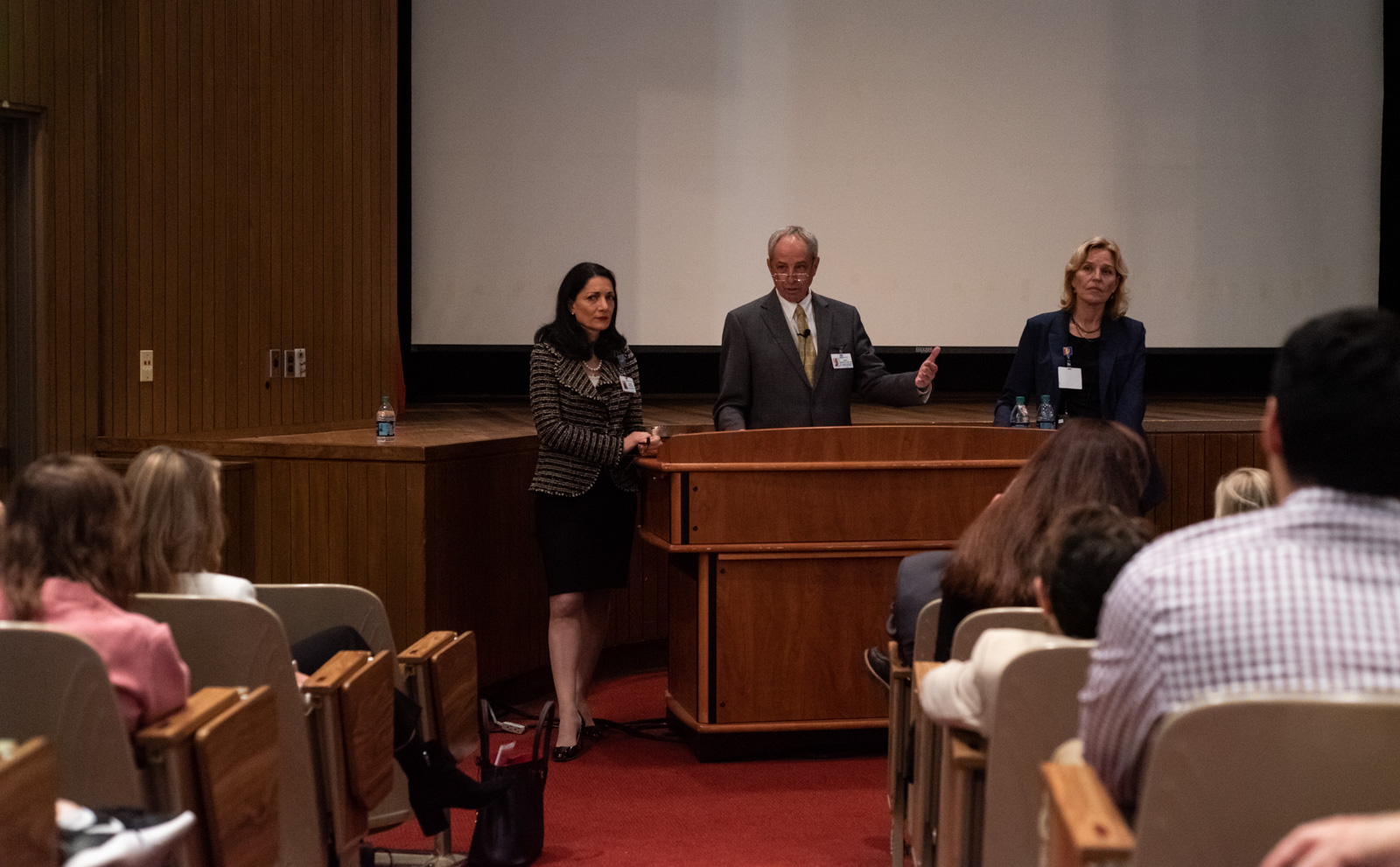 Faculty at the David Geffen School of Medicine challenged administrators’ commitment to diversity at a town hall Thursday. A committee to select the new psychiatry and biobehavioral sciences chair and director of the Semel Institute for Neuroscience and Human Behavior is made up of seven white men, three white women and one Latino man. (Anirudh Keni/Daily Bruin)

Roughly 200 doctors snapped, cheered and hissed at administrators during a town hall over concerns that the administration did not prioritize diversity.

Faculty clashed with David Geffen School of Medicine administrators over questions surrounding the replacement of Peter Whybrow at a town hall Thursday. Whybrow is retiring after serving 20 years as the chair of psychiatry and biobehavioral sciences and director of the Semel Institute for Neuroscience and Human Behavior.

The faculty members raised concerns about the lack of diversity on the search committee that is choosing the new psychiatry chair and expressed dissatisfaction with administrators’ plan to split Whybrow’s role into two positions: the chair of the psychiatry department and a separate director of the Semel Institute.

Out of 11 total members on the search committee, 10 were white and eight were men.

Faculty members said they were worried the lack of diversity on the search committee would cause the committee to overlook qualified candidates from underrepresented communities in Los Angeles.

Linda Ercoli, a doctor in the department of psychiatry, asked how UCLA Health could properly serve the community without a psychiatry chair who understands community needs.

“Who does research with the community? Who works in the community?” Ercoli said. “One thing that bothered me by looking at the search committee was that I didn’t see that.”

Martin said the search committee met guidelines set by the Office of Equity, Diversity and Inclusion. Martin added she implemented a rule in 2017 mandating 25 percent of all search committee members come from diverse groups, namely women or racial minorities.

“I want to make sure we have enough representation from people within the community, you know. I’m very sensitive, especially as a woman in a field where women are very underrepresented, to make sure that there is adequate representation,” Martin said.

Martin added after hearing the concerns about the lack of diversity that she wanted to look more into the issue.

Bath said she did not think women should be counted as part of the 25 percent diversity standard because she believes women should consistently be serving on these committees, considering many already serve in leadership roles at the School of Medicine.

“To me, how do you even count women as diverse when you’re a dean and we have president Spisso and this is 2019, that makes no sense to count women as part of the diversity quotient in a global leader like UCLA,” Bath said.

Faculty also expressed concern over the administrators’ suggestion that the chair of the psychiatry department be established as a separate position from the director of the Semel Institute.

Cynthia Telles, the director of the UCLA Neuropsychiatric Institute Spanish-speaking Psychosocial Clinic, said she was concerned that separating the two positions might make it harder for either to serve the mental health needs of Los Angeles.

“When you take an institution which has achieved such international prominence … and then talk about restructuring, disaggregating, whatever, it creates a lot of concern, because that integration’s been part of the secret sauce of this institute,” she said.

Stephen Marder, an attending psychiatrist at UCLA’s psychosis clinic, said separating the two functions would make it harder to find qualified candidates because he thinks the psychiatry position would be less favorable without the resources of the director position.

“Nobody would even be foolish enough to apply for the position unless they had adequate resources,” Marder said. “The result could very well be that this very strong, vital department would have as a leader somebody relatively weak – (somebody) willing to take a seriously flawed position.”

Still, administrators remained unconvinced that separating the positions would prevent candidates from fulfilling the same obligations to the community.

“I don’t quite understand why you would think that having one leader of department of psychiatry, and one leader of the Semel Institute, that they would not be able to work in partnership to address the needs of the people of California, of Los Angeles,” Spisso said.

Administrators said if they found a single individual who they felt was capable of running both the psychiatry department and the Semel Institute, they would consider them for both positions, as has been the structure in the past.

The town hall ended after an hour, as scheduled, but many faculty members were left with hands in the air, waiting for the microphone. Mazziotta said any more questions or concerns could be sent to him or other administrators by email.

Faculty said they felt they were not being included in the search for the new psychiatry department leadership.

Patricia Lester, director of the Nathanson Family Resilience Center and the medical director of UCLA Family Stress, Trauma and Resilience Clinic, said she did not understand why faculty were not being included in the discussions concerning Whybrow’s replacement.

“I guess it’s kind of puzzling to those of us who have been at the table doing this sort of work, why we haven’t been a part of that conversation,” Lester said. “I think … coming and really sitting at the table and thinking through with us, that would be optimal.”

Marder said he thinks administration was more defensive than receptive to the faculty’s concerns.

“They said they were open to that, they were listening, but it seems that they were more defending their opinion rather than being influenced,” Marder said. “But I think it’s too soon to know.

Both Mazziotta and Martin said they are open to continuing deliberations with faculty. Mazziotta said he does not have a deadline for the appointment, and will continue the search process until UCLA Health finds the right candidate.

“We want the best people,” Mazziotta said. “If we have to wait for that, we will.”