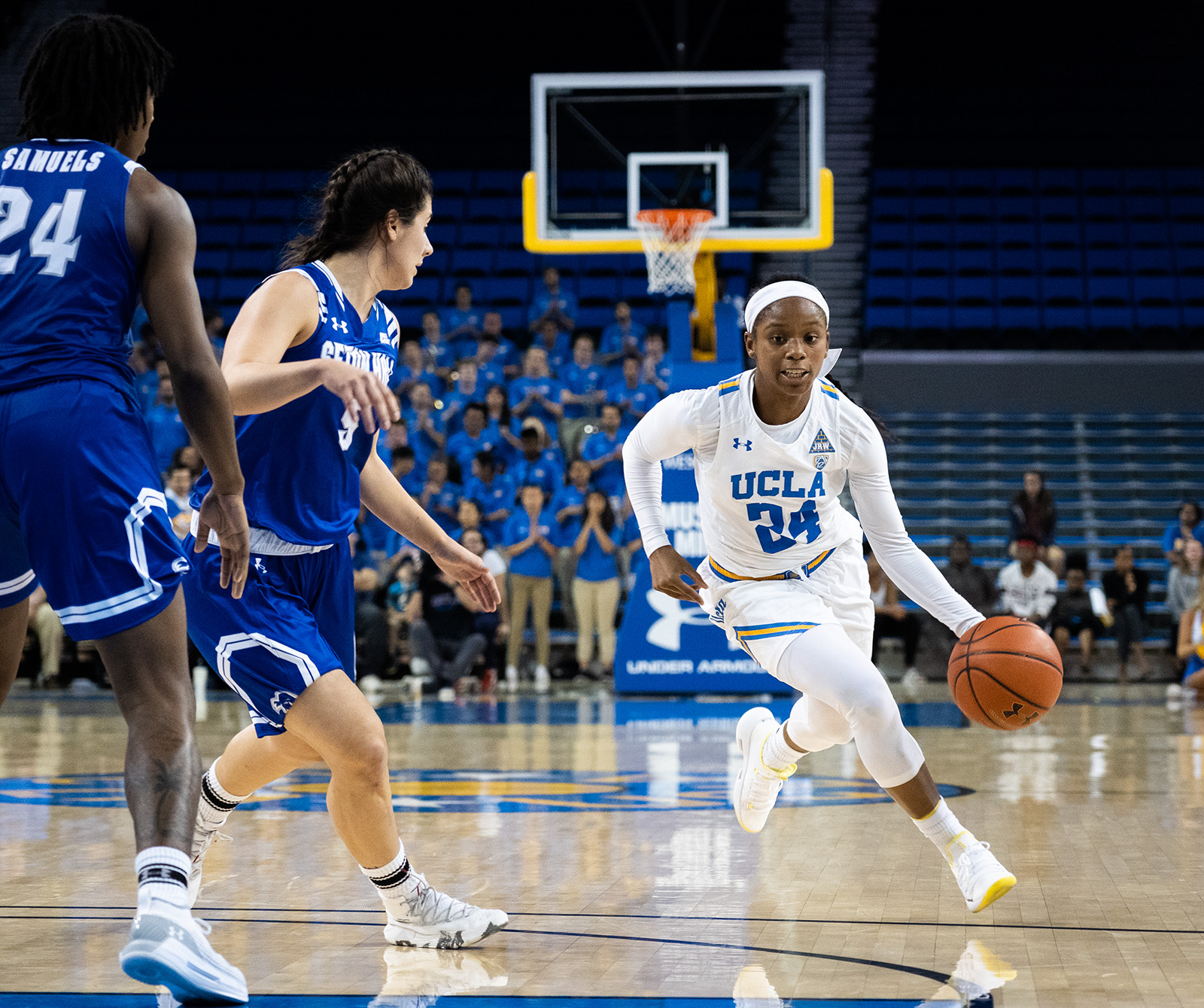 Senior guard Japreece Dean logged 22 points and three assists, but said she was not happy with the three turnovers in UCLA women’s basketball’s loss to No. 6 Stanford last Sunday. (Elise Tsai/Daily Bruin)

Correction: The original version of the photo caption incorrectly stated Japreece Dean had four turnovers. In fact, she had three turnovers.

Japreece Dean picked up the stat sheet as she sat down for the press conference – and then she rolled her eyes and released a sigh of frustration.

Dean went on to play 39 minutes and logged her second-best scoring performance of the season.

“That turnover was on me,” Dean said. “So I tried to fix my frustration by asking to come out of the game so that I could just take a deep breath.”

The Bruins suffered a third-quarter skid after outscoring the Cardinal in the other three quarters, falling short of their first top-10 upset bid of the season.

Coach Cori Close patted Dean on the shoulder before beginning her opening statement.

“I knew (the team) was going to grow into something special,” Close said. “I’m proud of the way that’s starting to come together.”

UCLA has gone 6-1 after a 3-5 start to the season, which included a loss to a now 9-7 Loyola Marymount team and a 34-point loss to North Carolina.

But Close has made adjustments since then and the team has responded.

The Bruins have shot 45.5 percent from the field in their last seven games, an improvement from 38.6 in their first eight outings. UCLA is now the top offensive rebounding team in the Pac-12 at 18.1 offensive boards per game and ranks fifth in the category nationally.

The Bruins would be sitting at ninth in the conference based on overall record, but instead are tied for third after going 2-1 in their first three Pac-12 contests.

“I (told the team that) if you will continue to fight like (that) even though we didn’t get rewarded today, you will be rewarded down the road,” Close said.

With five teams ranked in the top 25, Close said that there will be no surprise when there are close games or upsets that happen consistently throughout the rest of the season – especially because teams have to play each other twice.

“The Pac-12 is the best conference in the country,” Close said. “Period.”

Close added that any Pac-12 game can be a toss-up this year, and will continue to play a role in the team’s mentality throughout the regular season and into the postseason.

“Getting a win on the road any time in the Pac-12 is very significant,” Close said. “I know for our confidence, but also in the NCAA picture.”