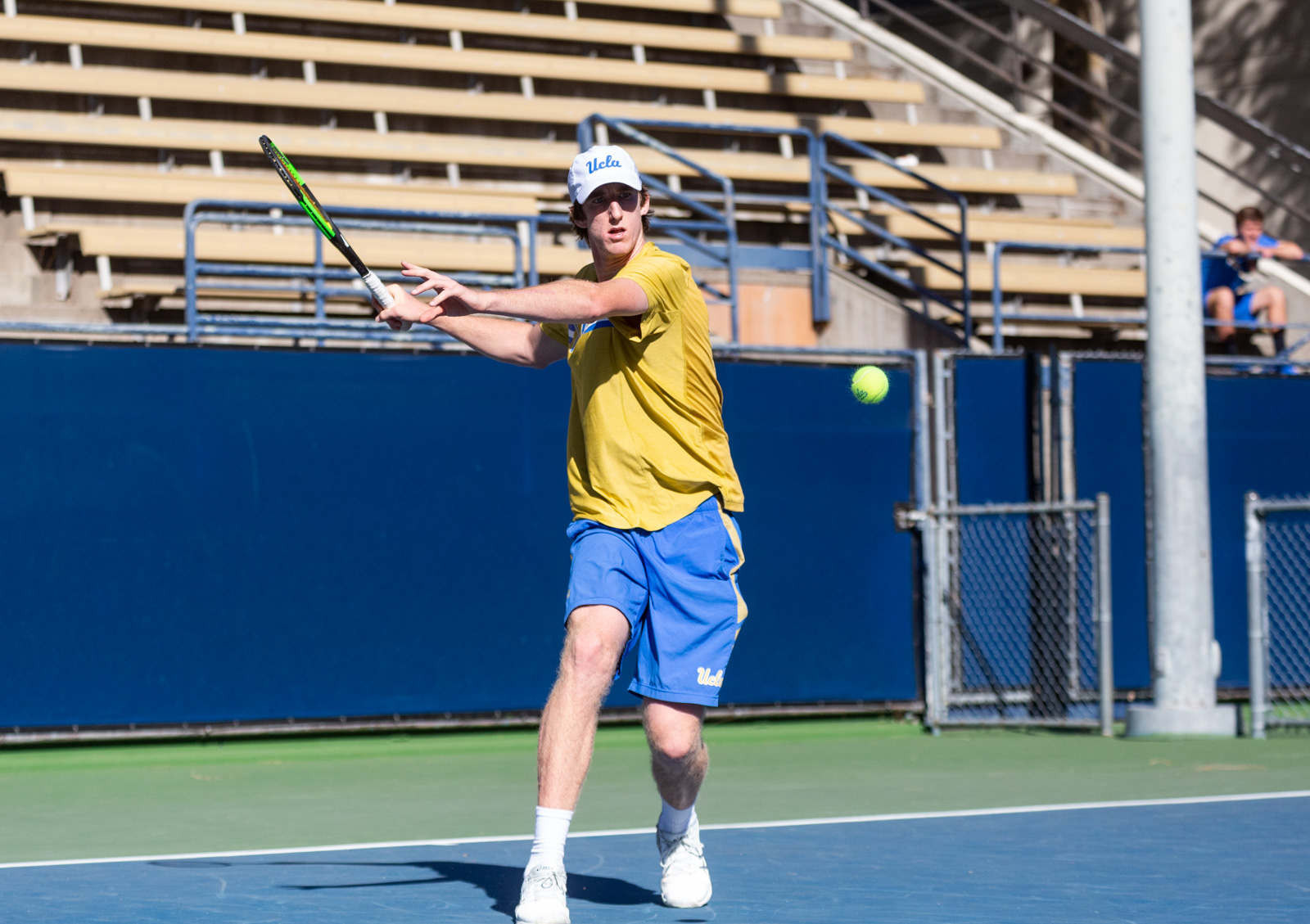 Sophomore Keegan Smith recorded a 40-7 singles record last season and finished No. 57 in the Oracle/ITA singles rankings, along with a 21-15 doubles record. (Daily Bruin file photo)

Nobody is quite sure what UCLA men’s tennis will look like this season, not even their coach.

“I’m not sure who will step up for us this season,” said coach Billy Martin. “There’s no guarantee or certainty of what’s going to happen, and that’s sports and that’s what’s so fun about it.”

Led by Martin for the 26th consecutive year, the Bruins, ranked seventh in the ITA preseason rankings, will look to replicate the success of a season that included a team loss in the NCAA semifinals, an NCAA doubles championship, and an NCAA singles semifinals loss.

Martin Redlicki, who went to the singles semifinals, along with Evan Zhu, who captured the doubles championship with Redlicki, have both moved on from the team, leaving holes at the top of UCLA’s lineup.

Next up for the Bruins appears to be sophomore Keegan Smith. In his freshman season, Smith accrued a 40-7 record playing singles and a 21-15 record playing doubles on his way to winning Pac-12 Freshman of the Year. However, Smith said the adjustment to top competition is never easy.

“I worked on my game a lot (in the offseason), certain things I needed to improve,” Smith said. “My volleys, backhand slice, my fitness, I really worked to be ready for the grueling season ahead.”

Martin said he was clear about what he expected from Smith.

“(Smith), even though he’s somewhat young, has a lot of experience under him,” Martin said. “He’s going to probably be playing really high for us.”

Alongside Smith, four sophomores and seven incoming freshmen return for the Bruins. Martin said junior Ben Goldberg and senior Max Cressy will play a crucial role for the team this season.

“(Cressy) is going to be a great leader for us,” Martin said. “(Goldberg), our only junior, he’s been through a lot, and is a very experienced player.”

Martin said Smith is another player whose resilience and leadership growth from his freshman year will help impact UCLA positively.

“We saw a player like (Smith) last year really get frustrated early in the year,” Martin said. “He digested the whole situation and really, from the Stanford match forward, he really came about as a mature young player in college tennis.”

However, Martin said more underclassmen will have to play a role if UCLA is to be successful this season. One player on the rise is sophomore Connor Hance, whose 18-8 singles record as a freshman showcased his abilities. Hance said he believes his success this season will hinge on his ability to manage his fitness and attitude.

“I lost some weight, and that’s going to help a lot,” Hance said. “Even a few pounds can make a big difference in tight, competitive matches. Mentally, I think I’ve also been a bit better, and that really should help me this year.”

Sophomore Bryce Pereira returns with a year of experience under his belt and a 24-12 doubles record. Redshirt sophomore Connor Rapp also returns with match experience, and freshmen Govind Nanda, Eric Hahn and Patrick Zahraj will all have the opportunity to break into the lineup and make a positive impact for UCLA.

Martin said he knows the Bruins are headed into the season with a lot of unknowns and many experiences to learn and grow, but he isn’t worried about the youth and uncertainty.

“The younger teams are always so much more enthusiastic,” Martin said. “They are so much more excited going in to each and every match, and that can make a big difference.”

The Bruins will open play this weekend at the National Collegiate Tennis Classic in La Quinta, California.