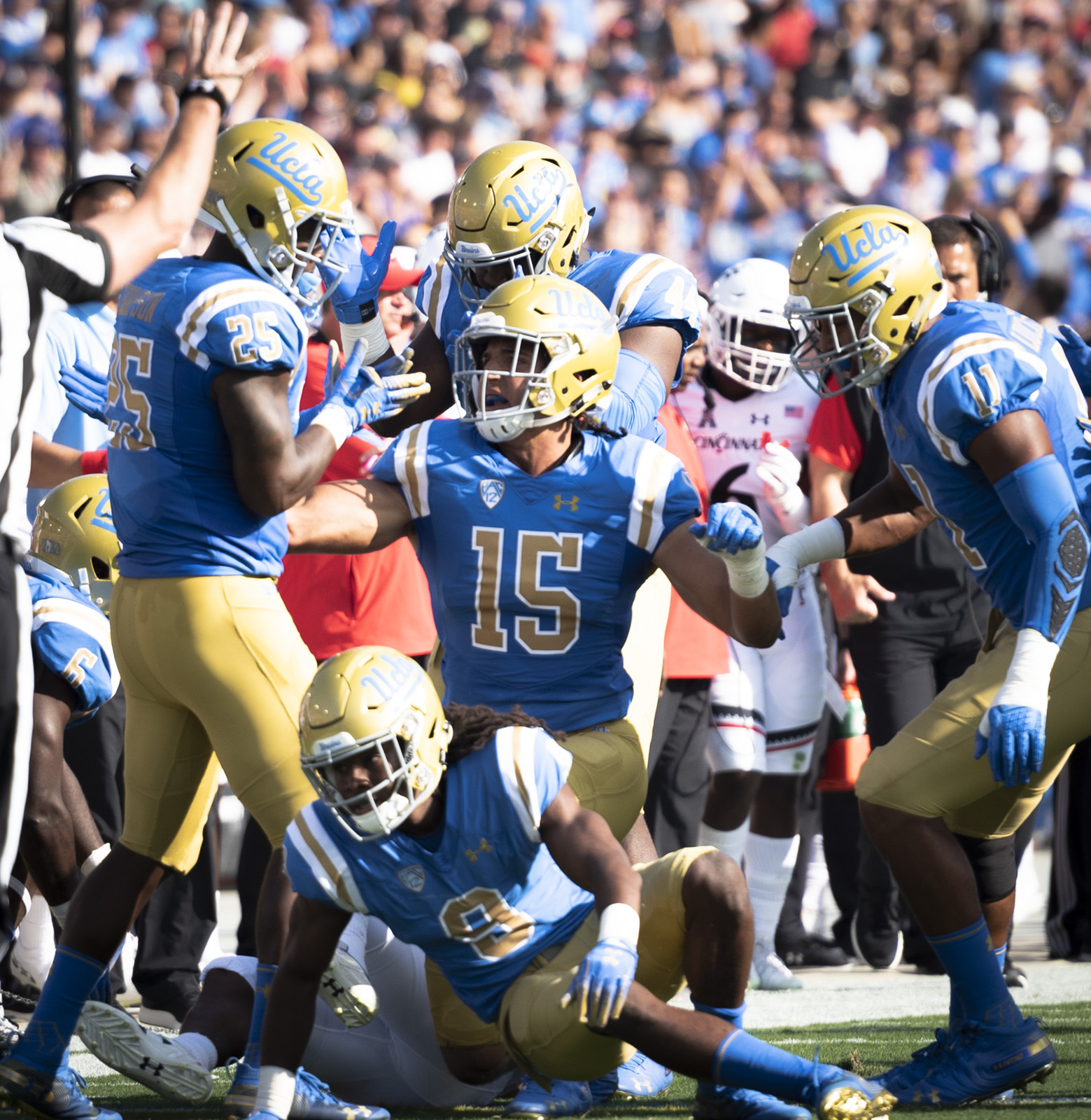 Former UCLA football defensive end Jaelan Phillips announced in December that he was medically retiring from the sport after battling concussions. But the No. 1 recruit from 2017 could be transferring to Pac-12 rivals USC or Stanford, according to 247Sports. (Axel Lopez/Assistant Photo editor)

Jaelan Phillips’ next move could come much to the chagrin of Bruins fans.

The former UCLA football defensive end announced his medical retirement from the sport last month after battling numerous injuries over the past few seasons. But as 247Sports reported Friday, the No. 1 recruit from the class of 2017 could be considering a transfer to resume his playing career.

Among the schools reported to be of interest to Phillips, Pac-12 rivals Stanford and USC appear to be leading the pack. If Phillips were to make the trip east of the 405 freeway and join the Trojans, he would be one of just a handful of athletes to transfer within the rivalry during their college careers.

Although the list is short, it includes significant names, such as former UCLA standouts Rai Benjamin and Caleb Wilson.

Benjamin – a track and field athlete – spent his first two collegiate seasons with the Bruins before a coaching change led to his departure from the program. In 2017, Benjamin achieved a second-place finish in 400-meter hurdles at the NCAA championships and also came within a hundredth of a second from clinching UCLA’s first track championship since 2000.

In his first season with USC, Benjamin won three NCAA Division I track titles as well as a pair of Pac-12 titles to add to the existing conference championship he earned during his time with the Bruins.

The loss of Benjamin proved to be costly for UCLA, but the Bruins have also been able to steal talent from their crosstown rival.

Former UCLA football tight end Caleb Wilson began his collegiate career as a walk-on with the Trojans in 2015. But after his father was fired from the USC coaching staff, he decided to transfer.

Wilson joined the Bruins in March 2016 and broke out during the 2017-2018 campaign, recording 490 receiving yards and a touchdown in five games before a broken foot ended his season.

He returned in time for the 2018-2019 season and cemented himself as one of the top tight ends in the country by posting career-highs with 60 receptions, 965 yards and four touchdowns.

Wilson entered his name into the NFL Draft in December and will likely be selected within the first two to three rounds.

However, if Phillips transfers to USC and remains healthy, his draft stock may surpass that of Wilson’s.

UCLA probably does not want to see another one of its own recruits go on to do better things with an archrival, but it looks as though things could be heading in that direction.