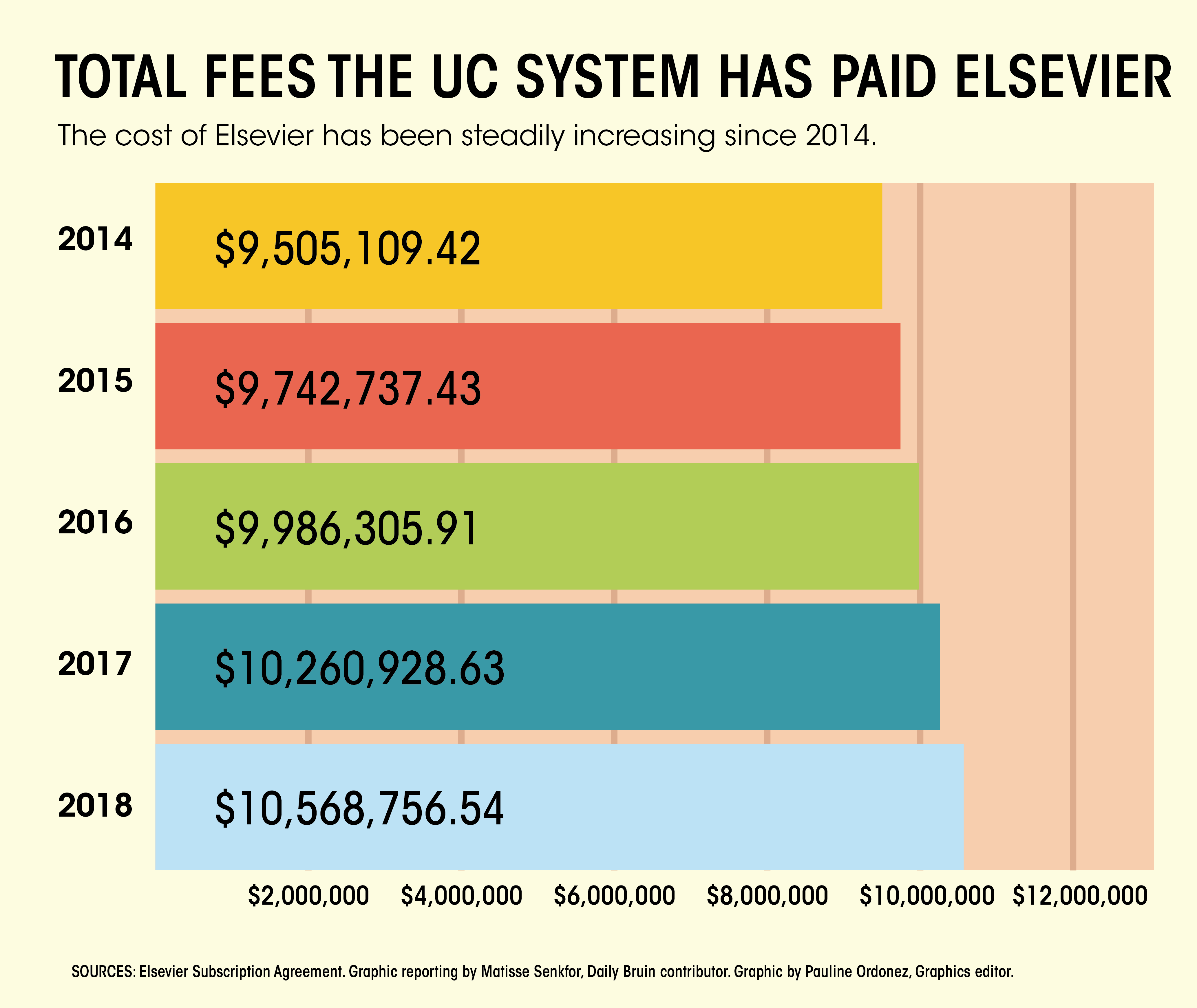 The University of California is negotiating a new contract with an academic publisher due to unsustainable and increasing subscription costs.

The UC’s contract with Elsevier, the owner of over 2,500 journals including Cell and The Lancet, ended on Dec. 31. The UC aims to lower subscription costs and make all of its research available for free to the public in the ongoing contract negotiations.

The contract cost the UC more than $10.5 million in 2018. This is a significant portion of the UC’s approximately $40 million yearly budget for journal subscriptions, according to an email statement from Ivy Anderson, the co-chair of the UC’s Publisher Negotiation Task Force.

UC researchers additionally pay approximately $1 million per year through grants to publish in the subset of Elsevier journals that are open-access, she said. Open-access journals make articles available to the public for free, and instead charge fees to the authors to publish their research.

Jeffrey MacKie-Mason, the university librarian at UC Berkeley and co-chair of the UC Journal Negotiations Task Force, said in an email statement that Elsevier and other publishers have been increasing subscription costs for many years, while library budgets have been decreasing. As a result, libraries are cutting costs by ending journal subscriptions and buying fewer books.

“We can’t continue any longer without serious harm to our campus libraries, and so we are pushing aggressively for a price reduction,” he said.

Additionally, in negotiating a new contract, the UC wants all of its research published as open access, he said. He said the UC would ideally have a “publish-and-read” agreement that combines the cost of subscribing to journals with open access fees to accomplish both goals of lowering costs and providing open access to UC research.

Both Anderson, the associate executive director of UC’s California Digital Library, and MacKie-Mason said they could not discuss the ongoing negotiation in detail. Access to Elsevier publications was extended until Jan. 31 as the negotiation continues.

MacKie-Mason said if a new agreement is not reached by then, UC students and faculty will still have permanent access to most already-existing articles in Elsevier journals, but it is unclear which new articles will be available, if any. He said there are other ways to get new articles without a subscription, such as an interlibrary loan, asking an author directly or purchasing individual articles.

Elsevier offers access to all its journals in a bundle, said Burt Totaro, a professor in the UCLA mathematics department. He said some of its journals are at the top of their fields while others are not equally prestigious, but university libraries have to pay for the whole bundle to get the journals they want.

Edward Walker, a professor of sociology, said he thinks publishers like Elsevier know libraries are a captive market because they have no choice but to pay large amounts of money for a few prestigious journals.

“A lot of the time at universities the faculty and students are not always aware of exactly how much they’re paying for these,” he said.

The UC is not the first institution to take issue with Elsevier’s rising costs and resistance to open access. Recently, Swedish and German institutions canceled their subscriptions with Elsevier, said Joseph Bristow, a distinguished professor of English and chair of the UCLA Academic Senate for 2018-2019. He said skepticism of Elsevier’s business model has been growing.

“They’re relying a lot on the relatively or completely free volunteer labor of professors at universities to produce the content for these journals as well as do the peer reviewing for them,” Walker said.

However, publishing companies benefit the most from the subscription costs that universities must pay to access this content, he added.

In 2017, Elsevier had a profit margin of nearly 40 percent, higher than that of Springer Nature, another large journal publisher, which had profits of around 23 percent. Totaro said 40 percent is an enormous profit margin for any business.

“It seems bizarre that we’re having to buy back our own work at a very high price,” Bristow said.

Totaro said he may have a stronger opinion on Elsevier than most; he has been boycotting the publisher since 2000. However, he said there is a general feeling among faculty members that the current publishing model is flawed.

Bristow, Scott Waugh, the executive vice chancellor and provost, and Ginny Steel, the Norma and Armena Powell University Librarian, sent an email in December asking UCLA faculty to consider not contributing to Elsevier through publishing or reviewing during the negotiation period.

John Villasenor, a professor of engineering, public policy and management, published an article in The Chronicle of Higher Education criticizing the email as an institutional promotion of boycott, which he thinks would set a bad precedent. However, Bristow said this email was not promoting an enforced boycott, since faculty members are still free to decide where to publish their research. He added faculty from certain departments on campus agreed with the email’s sentiment and overwhelmingly support moving toward open access.

Walker said he thinks it is reasonable for UCLA to ask faculty to play a role in helping with the negotiations, since Elsevier’s journals are relying on the faculty’s labor.

The growing pushback against Elsevier is directly connected to the rise of open-access publishing, Walker said. He said researchers are aware of open-access alternatives to paid subscription journals that offer more transparency and reach a wider audience.

“The landscape of scholarly publishing is going through transformation like never before,” Bristow said. “The mechanism of sharing work is changing rapidly.”