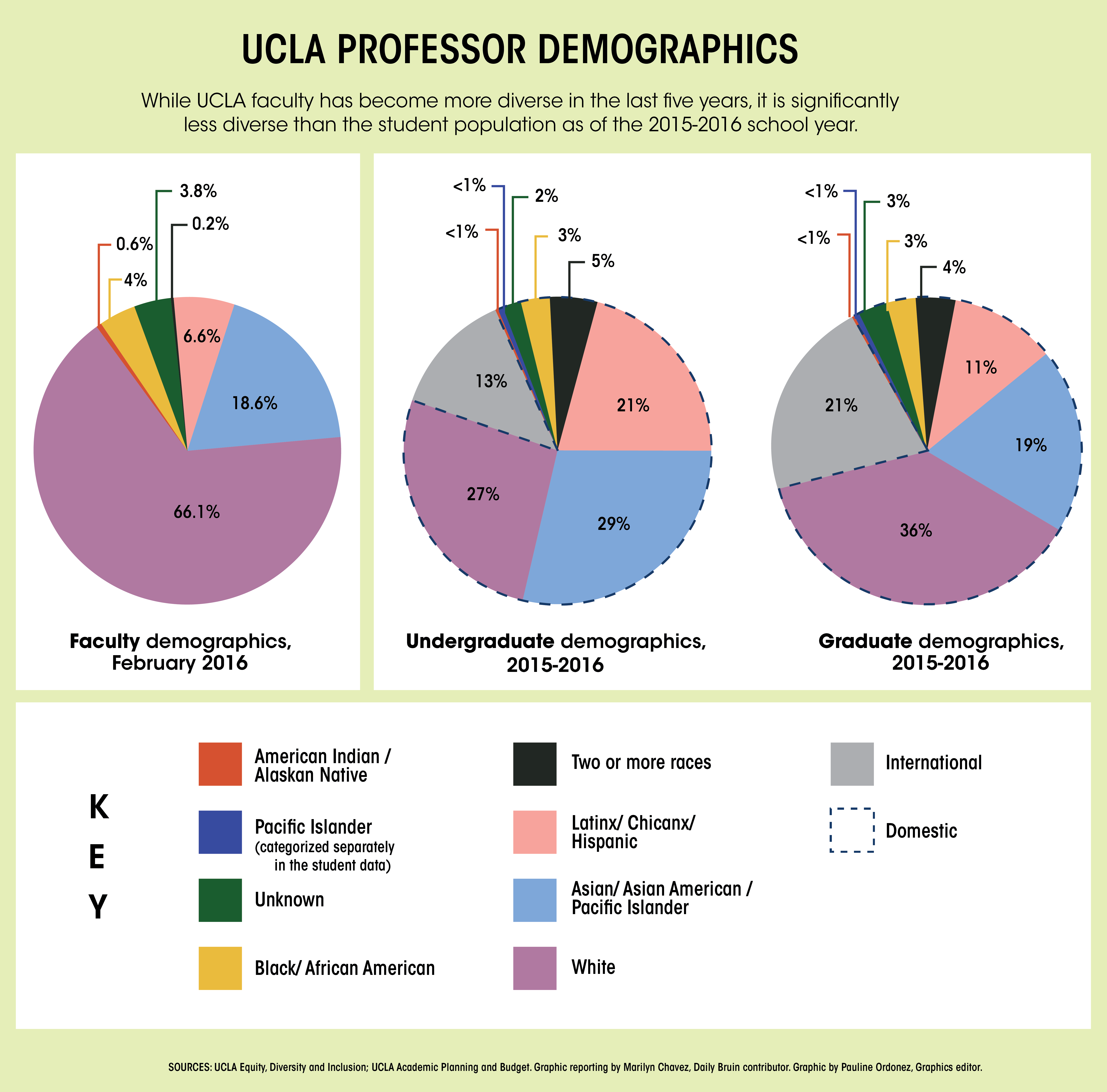 UCLA administrators implemented changes to the hiring process in hopes of fostering greater diversity within the faculty.

All prospective UCLA faculty were required to complete Equity, Diversity and Inclusion statements beginning the 2018-2019 academic year. An EDI Statement is a statement in which a candidate describes their past, present and future contributions to equity, diversity and inclusion, according to the EDI office.

Scott Waugh, UCLA executive vice chancellor and provost, said he implemented the policy to gather information about equity, diversity and inclusion more consistently by using an institutional approach. Prior to this mandate, only certain departments required an EDI Statement, while others made it optional.

The EDI office described the new mandate in an email statement as a tool that better positions UCLA to live up to its ideals, but acknowledged the measure offers only a modest attempt at resolving the campus’ lack of faculty diversity.

Richard Sander, a law professor, said a diversity gap may exist between students and faculty because the student population turns over completely every four years while faculty experience a slower turnover rate.

“We are in an incredibly diverse state where taxpayers of all ethnic backgrounds and cultural backgrounds contribute to public goods like the University of California, and it just seems just that an institution like UCLA should do a better job of reflecting the state and the stakeholders,” Hunt said. “And of course, one important stakeholder group are UCLA students, who themselves are quite diverse.”

Faculty diversity has slightly increased since 2012. For example, women comprised 37.7 percent of faculty members in 2016, compared to 34.7 percent in 2012, according to the General Campus Faculty Demographics on the EDI website.

Although the impact of the campuswide mandate has not yet been thoroughly studied at UCLA, its implementation sparked differing opinions from faculty and students about addressing diversity at UCLA.

Chon Noriega, director of the UCLA Chicano Studies Research Center, said he supports the new mandate, but added the measure cannot sufficiently address diversity issues at UCLA on its own.

“For the search committee, the statement gives you a more dynamic understanding of the candidate as a scholar, as a teacher, but also as a colleague who is involved with shared governance in your department or school in the same way that teaching statements do that or community engagement or civic engagement statements,” Noriega said.

Noriega added the statement may offer a more complex and dynamic insight into a professor’s life.

“I don’t think the statement is going to be a cure-all, it’s not going to resolve things, it’s just another piece of information,” Noriega said.

Hunt said he also believes the EDI Statement alone is not going to be enough to address the lack of faculty diversity but supported its campuswide implementation.

“I think there’s going to be lots of different, necessary, but insufficient, … individual strategies that you have to employ, and I think (the EDI Statement) is one of the important ones,” Hunt said.

Both Hunt and Noriega are part of departments that have independently required EDI statements prior to the mandate.

Jaime Vela, an anthropology graduate student, said while he believes UCLA is not doing enough to increase diversity awareness, he does not believe the EDI Statement should be required in the hiring process.

He added he thinks requiring the statement can lead to candidates writing what they believe will earn them a position as opposed to genuinely caring about culture and diversity.

“You run the risk of ‘I know what gets me in,’” Vela said. “To me, the best assessment is ‘OK what have you done, and let me research some of the articles you have published.’ … If none of your research or papers have anything to do with culture, well obviously you do not care about culture.”

Although Vela commended UCLA’s attempt to address the diversity gap between faculty and students, he said he is concerned about how UCLA plans to enforce the policy’s intent once the new faculty gets acclimated to the campus.

“So this could be a good thing for future hires, but it does nothing to change the diversity climate currently here on campus,” Vela said in an email statement.

Sander said he also has concerns about a candidate’s ability to be sincere in EDI statements, and added he does not support the new policy because of the politicized nature of diversity.

“It discourages people from talking about these issues in anything other than the prescribed, politically correct way,” Sander said.

He added he believes the requirement could easily become political since diversity in higher education is a controversial issue in the United States, and added that political tests are not permitted under UC’s code of operations.

“Requiring candidates to provide a statement that’s extremely politicized is essentially implying that there is a correct position that they should take,” Sander said.

Sander added he believes issues of diversity should be addressed during the tenure of a faculty member’s academic contributions, rather than during the hiring process.

“To build diversity, it’s important to look at the entire pipeline, and understand from the time people enter college to when they enter the academic market, try to become assistant professors, what are the things that cause women or minorities to drop off the pipeline, and trying to address those things,” Sander said.

Still, others said they believed the EDI Statement mandate was a step in the right direction for the university.

“It’s really crucial for me to see people of color in faculty. It was one of the deciding factors of me coming to UCLA,” Corpuz said. “Understanding and putting a pressure on the hiring practices that this institution does for faculty and for the student population is so vital in understanding how we can succeed.”

The EDI office said EDI statements are only part of a larger campus effort to increase awareness and promote equity and diversity in the hiring process.

“EDI (statements) comprise one piece of a broader institutional effort to promote equity, diversity, and inclusion at UCLA,” the EDI said in an email statement. “In the context of faculty hiring, these efforts take multiple forms.”