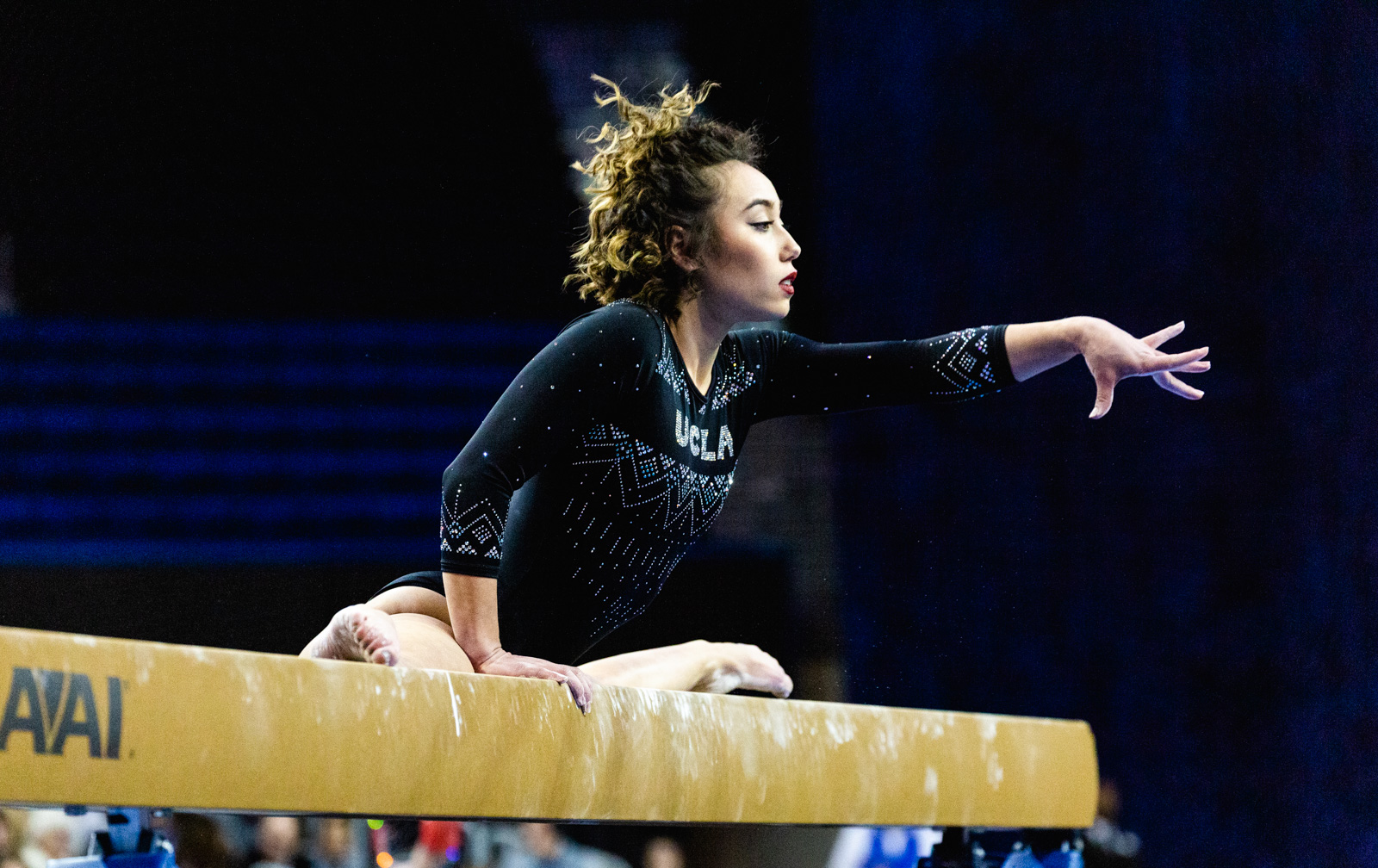 Senior Katelyn Ohashi won the balance beam and tied for the win on floor exercise in the Bruins’ season-opening meet against Nebraska on Friday. Ohashi scored a 9.900 and a 9.950, respectively, on the two events. (Amy Dixon/Photo editor)

The Bruins have begun their fight to get back on top.

After coming from behind to clinch UCLA’s 115th NCAA title last season, No. 1 UCLA gymnastics (1-0) began their season Friday with a win over No. 11 Nebraska (0-1) in Pauley Pavilion. The Bruins recorded a final score of 197.250 – the highest score posted by the Bruins in their opening meet since 2005.

“Every year has been the same cycle: preseason and then training to evolve, but it never quite happens for us,” said junior Kyla Ross. “But, this year is different because I decided that I’m gonna do whatever it takes for us to get back to the top and I feel it.”

Coach Valorie Kondos Field announced in September she would be retiring after 36 years in the UCLA athletic department and leading UCLA gymnastics to seven national championships.

Kondos Field said her goal for the team in her final season is to be cognizant of the depth of their roster.

“We always want to hit 24 for 24 routines and to stay healthy,” Kondos Field said. “If we have someone who’s great but their body is hurting them, thank God we’re so deep, because we will put someone else in.”

Kondos Field added that the Bruins do not find it hard to remain focused in their season-opening meet despite their big win in April.

“We’ve been so high for so long that I was worried that would turn our nature out of bounds and we would go flying off the equipment,” Kondos Field said. “But, they were remarkable. They’ve hit the big stuff. They just got ahead of themselves a bit.”

UCLA graduated five seniors at the end of the 2018 season and has added four new freshman recruits to its current squad – two of whom have represented the U.S. gymnastics team in international competitions.

The Bruins now have four seniors – Brielle Nguyen, Katelyn Ohashi, Stella Savvidou and Macy Toronjo – who hope to lead the team to victory once again. Ohashi said she was going to put in the effort to ensure that her team is strong this season.

“I think the leadership role has been the hardest part of the season so far,” Ohashi said. “We’ve struggled because there aren’t many seniors this year. Maybe it’s because we’re literally the shortest class or maybe we aren’t intimidating enough, but I know there’s a lot I need to learn about leading and I plan to do that.”

The Bruins will continue their season at the Collegiate Challenge powered by Under Armour in Anaheim on Saturday. They will be competing against No. 9 California, No. 6 Michigan State and No. 14 UC Davis.

“It doesn’t matter if we win in January, we have to win in April,” Kondos Field said. “But, you know, we’re planning on winning them all.” 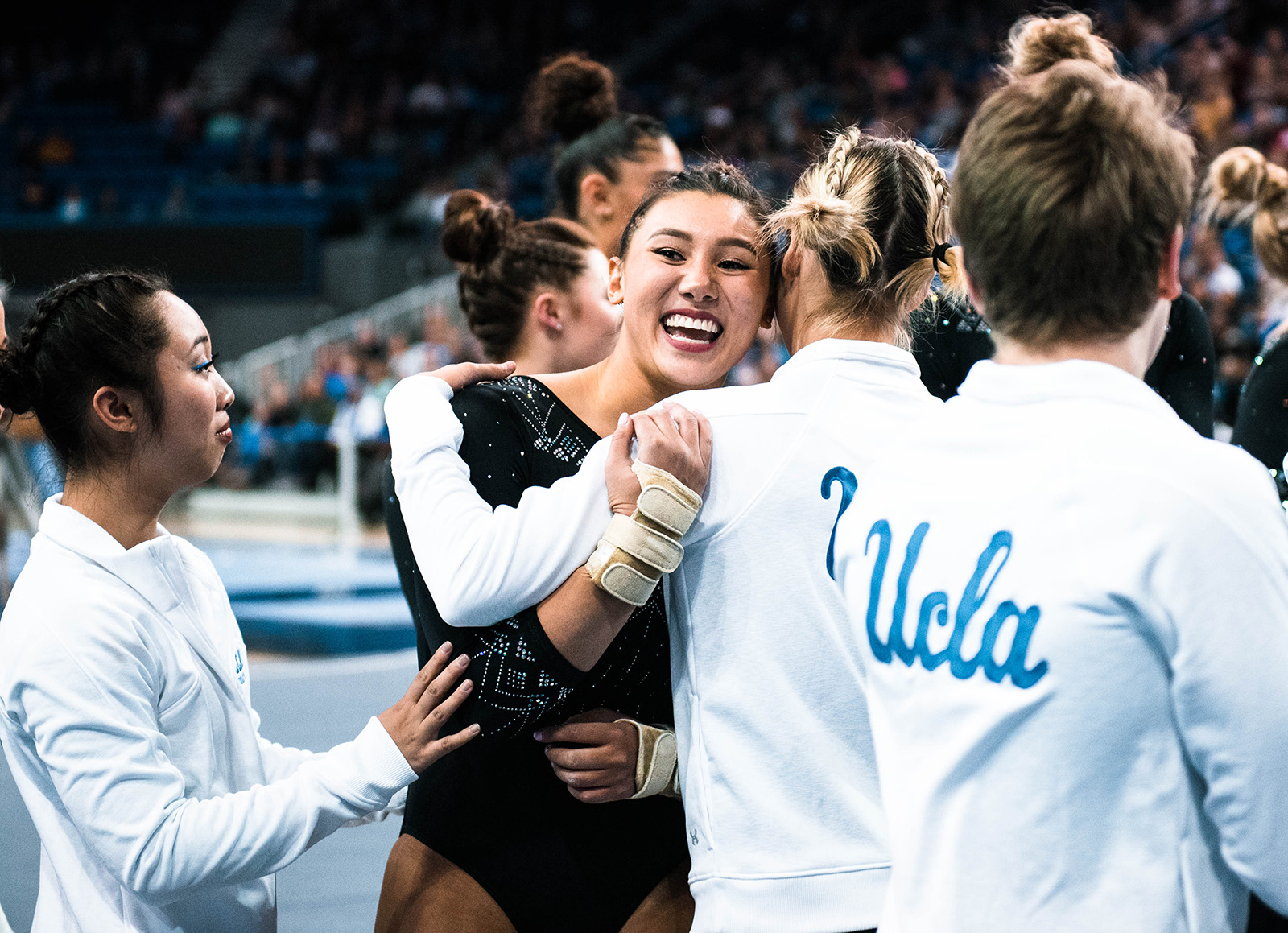