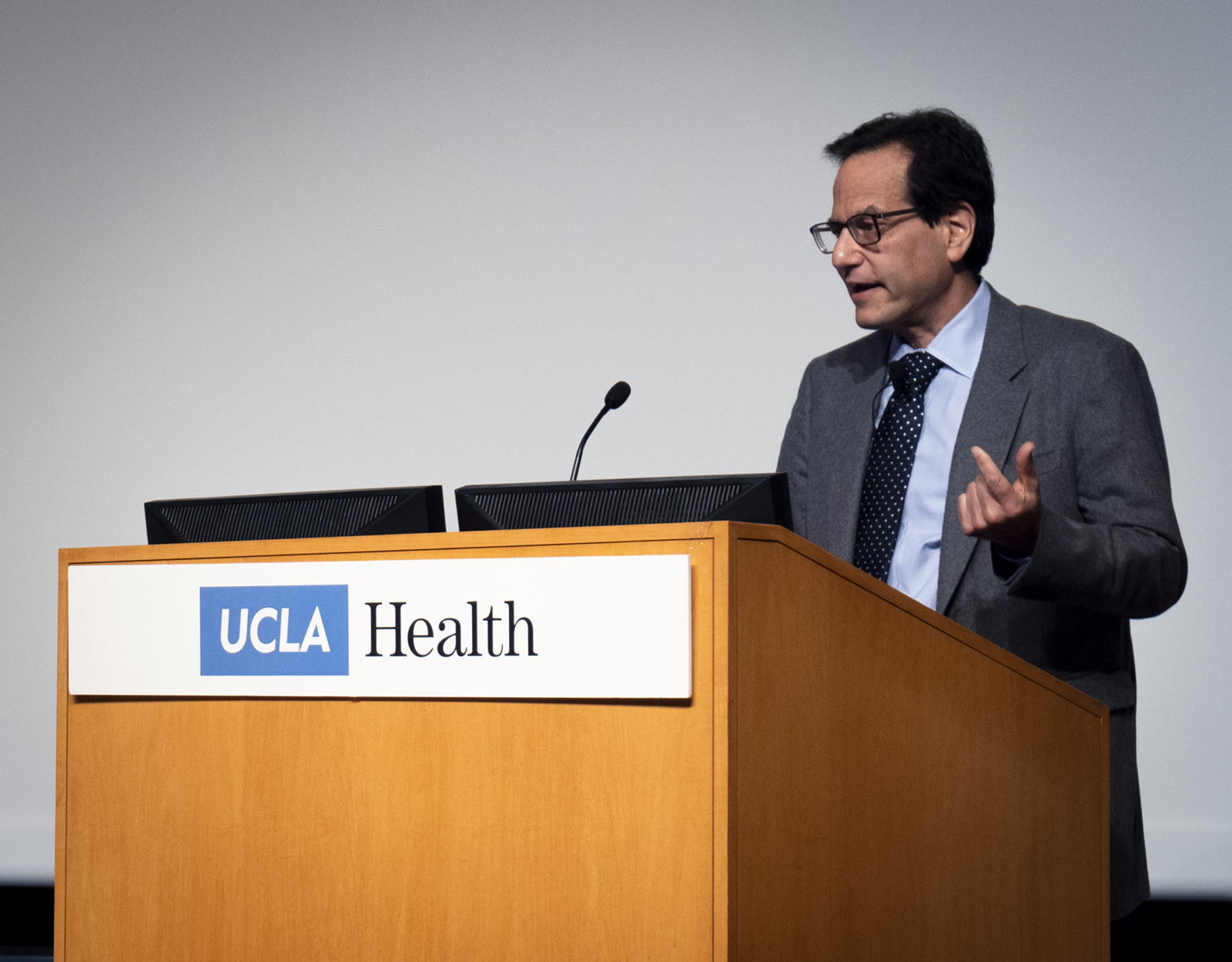 At a TEDxUCLA event Tuesday, researchers discussed their work studying depression and the relations their findings will have to the UCLA Depression Grand Challenge. (Xuxin Zhang/Daily Bruin)

Researchers studying depression spoke about the reasons they study the condition and described the purpose and work of the UCLA Depression Grand Challenge at an event on campus Tuesday.

Speakers at the TEDxUCLA Salon talked about the DGC’s new research techniques, their efforts to help those with depression and personal stories about the effects of depression.

The UCLA Depression Grand Challenge is an initiative that aims to end half of all depression by 2050, and to completely end depression by 2100. The DGC is conducting a 100,000-person study of depression and using digital tools to diagnose depression from sound recordings to learn more about the disease and its causes with the goal of eventually finding the best way to treat it.

Nelson Freimer, director of UCLA DGC, spoke about the purpose of the DGC and the work it does. Describing the initiative’s work, Freimer said little is known about depression despite its rising impact on people all over the world.

“We understand much less about what causes depression than what causes other terrible diseases, like cancer. And still, we’re only able to offer treatment that’s effective to about half of those who come to us seeking help,” Freimer said. “The World Health Organization predicts that by the year 2030, just 11 years from now, depression will be the number one contributor to the global burden of disease.”

Depression currently affects more than 300 million people according to the World Health Organization. It affects people in different ways and is the strongest risk factor for suicide. Moreover, it can worsen the outcomes for patients who have other diseases, making conditions like heart disease, Alzheimer’s and cancer even worse.

Jonathan Flint, a DGC executive committee member, said he came to UCLA because researchers here are focused on discovering the causes of depression.

“The reason I’m standing here and the reason we know this is such a big problem is that we really don’t understand what causes depression,” Flint said. “UCLA has put at the center of its mission to cure depression a study to find the causes.”

Flint said all depression is commonly viewed as the same disease, when in reality there can be many differences from patient to patient, similar to those between different types of cancer.

Dorin Esfahani, associate director of development for the DGC, helped organize the event. She said the event began three years ago, when the advisory board of the Stewart and Lynda Resnick Neuropsychiatric Hospital at UCLA decided to hold community outreach programs to educate the public on mental health topics.

“This year the Resnick Neuropsychiatric Hospital board of advisors decided they would focus on the topic of depression, because it’s not talked about nearly as much as other illnesses such as cancer,” Esfahani said. “I think people opened up and it started conversations and it paved the way for more events about depression and people educating themselves and sharing their stories.”

Freimer said depression affects everyone, and a strong effort must be made in order to completely eradicate it.

“Depression touches all of us. The one in four women, the one in six men who will experience at least one episode of major depressive disorder over their lifetimes are our coworkers, our friends, our family members, ourselves,” Freimer said. “UCLA must undertake the first steps to mount the global campaign to rid the world of the scourge of depression.”