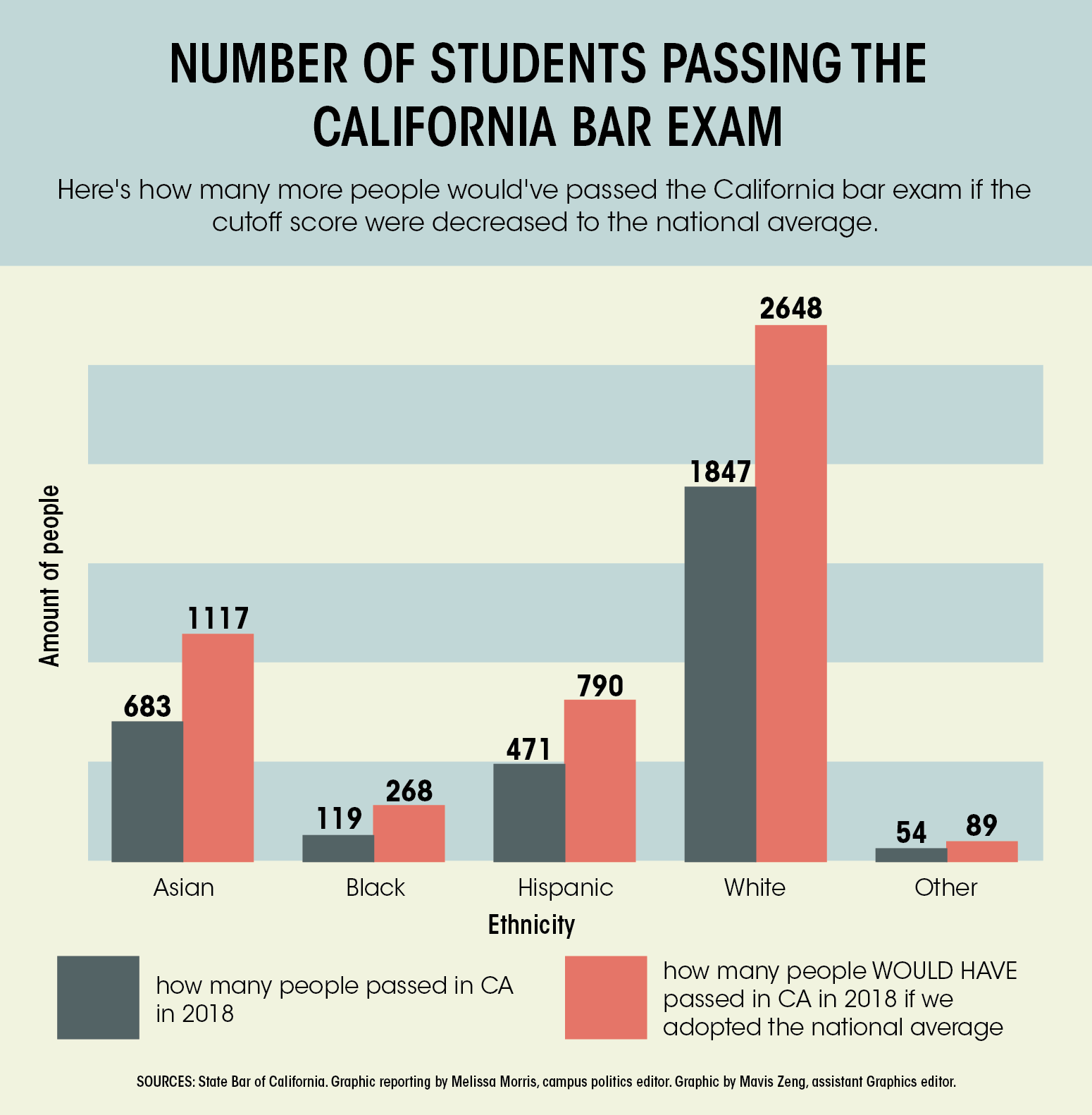 Hundreds of law students fail the bar exam in California, but would pass with the same score elsewhere due to varying standards between states.

California has the second-highest cut score, or minimum score required to pass the exam. California students must score a 1440 out of 2000 to pass, compared to the national average of 1350.

The state also has the second-lowest pass rate for the bar in the nation, after the District of Columbia. Less than half of students taking the California bar exam passed in 2018, the lowest pass rate since 1951.

Jennifer Mnookin, dean of the UCLA School of Law, said she thinks California would be better off if it lowered its cut score.

“It would be better for my students, but also for the state of California, and for access to justice, and for the diversity of the legal profession,” Mnookin said.

Jackson Hogan, a student at the UCLA School of Law, said he thinks requiring a higher score would make sense if the state could verify that a higher cut score ensured competency.

“Unless they were able to establish that the incompetent lawyers that were causing the problem had lower bar (exam scores) that caused the issue, then it seems like that’s creating a lot of stress for everybody,” Hogan said.

Mnookin said she thinks there is no evidence that a higher cut score produces better lawyers.

“California set its cut score a long time ago, and it didn’t do it after careful analysis and study,” Mnookin said. “It’s been kind of stuck there.”

She noted other Western states, including Washington and Oregon, had comparably high cut scores, but lowered them in recent years.

Mnookin also added the California Supreme Court has ordered studies to evaluate the impact of the high cut score, but these will take years to complete. She said she thinks the state should not wait on potentially unclear answers to act on an important public policy issue.

Divya Rao, a UCLA law student, said she thinks the school offers opportunities for students to prepare for the bar, if they choose to utilize them.

“I think the faculty is amazing, but if a student takes a conscious decision to not take doctrinal classes that are tested on the bar, I would not say it is the school’s fault if they fail,” Rao said.

She added she thinks everyone wishes the pass rate was higher, like New York’s 63 percent pass rate in 2018. New York’s cut score is 110 points lower than California’s, at 1330.

Ihaab Syed, a UCLA law student, said she thinks UCLA does not do enough to prepare students to take the exam and added she feels she needs outside preparation.

“The rates have made me take my studying more seriously and not put off studying for the exam, so I’m thinking about what I can do to start preparing early or what prebar things I can do,” Syed said.

Rao added she believes the cost of outside exam preparation courses and materials makes it more difficult for students from disadvantaged backgrounds to pass the bar. She said she thinks this reduces the diversity of lawyers in the state.

Mnookin said the California cut score has had a disproportionately negative effect on underrepresented minorities.

“We’re a state that values diversity, one of the most diverse in country, and our atypically high cut score is harming diversity (in) the population of lawyers,” Mnookin said.

If California moved the cut score to the national average, more than twice as many African-American students would have passed. The number of new Hispanic lawyers would have increased by an additional two-thirds.

Mnookin said she thinks it would be fairer all-around to lower the cut score to the national average.

“There’s an enormous number of students, including students of color, that (having taken) the exam in any other state would be beginning their careers as lawyers,” Mnookin said.