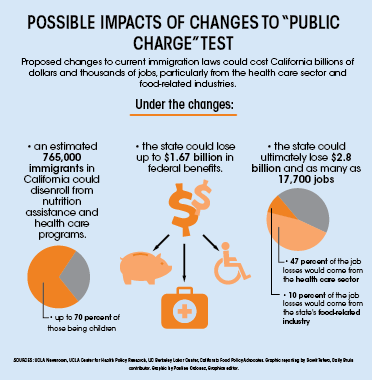 The report, which was released in December by the UCLA Center for Health Policy Research, the UC Berkeley Labor Center and California Food Policy Advocates, found that California’s economy could lose $2.8 billion and up to 17,700 jobs because of changes to the “public charge” rule proposed by the U.S. Department of Homeland Security in September.

U.S. immigration officials conduct a public charge test when people apply for legal permanent residency or temporary visas. A “public charge” is an individual who is likely to become primarily dependent on the government for basic needs.

An individual who is likely to become a public charge is not eligible to become a legal permanent resident or receive a temporary visa. Prior to the change, people would only be considered public charges if they receive welfare payments and long-term institutional care.

The proposed rule change will make the public charge regulation stricter by also taking into consideration whether individuals have received health care, housing and nutrition assistance. With the proposed changes, noncitizens could be denied lawful permanent residence or temporary visas if they have received these benefits.

The rule change will also restrict entry into the U.S. by gauging English proficiency, education level, income and age.

The changes to the public charge rule could cause about 765,000 immigrants in California to disenroll from nutrition assistance and health care programs due to fears about the possible impacts the programs could have on their ability to gain status as legal permanent residents. This could lead to job losses in health care- and food-related sectors of about 47 percent and 10 percent respectively, according to the report.

Ninez Ponce, a public health professor and an author of the study, said changes to the public charge rule would directly hurt immigrant students enrolled in federal benefit programs. The changes could also hurt students indirectly through a ripple effect of job and revenue losses in California’s economy, she said.

She added students could also be indirectly affected if their family members are enrolled in public programs due to effects on the family finances.

“I don’t think students are going to be affected from enrolling or disenrolling from school, but it will have trickle-down effects,” Ponce said.

Ponce said she believes students who are not U.S. citizens but use Medicaid assistance or food stamps could be prevented from acquiring lawful permanent residency.

Students enrolled in federal programs for basic need assistance may disenroll and pay out of pocket for the benefits they received and school material fees previously paid for by the government, Ponce added.

Laurel Lucia, director of the Health Care Program at UC Berkeley Labor Center and co-author of the study, said the rule change could lead to a lot of fear and confusion about the consequences of applying for federal benefits.

“UC students who have the opportunity to apply for a green card in the future through family sponsorship or other special circumstances might be affected by the rules change,” Lucia said.

Lucia added many UC students participated in a Nov. 7 seminar about the changes to the immigration policy because they felt afraid and confused about the changes. She said many students were worried their family members would be negatively affected.

She said the change would only affect legal immigrants because undocumented students are already barred from federal benefits. However, if undocumented individuals have a chance to apply for permanent residency in the future, these rule changes could prevent them from doing so.

Tia Shimada, director of programs at California Food Policy Advocates and co-author of the study, said citizens and noncitizens alike are likely to be adversely affected by changes to the public charge rule.

“There is a wider circle of noncitizens and citizen children with noncitizen parents who will be affected by the fear, misinformation and confusion being generated by the proposed changes,” Shimada said.

Abel Valenzuela, a representative of the UCLA Advisory Council on Immigration Policy, said the public charge rule changes could affect students and their families.

The council has put up comments in the federal registry for the proposed rule changes, which closed Dec. 10, he said. Students have not come to them to voice their concerns about this issue, he added.

Valenzuela, also a professor of Chicano studies and urban planning, said there is a lot of concern that students and their relatives will be negatively affected.

“Most experts and analysts have pointed to the wide condemnation of the rules change,” Valenzuela said.

Valenzuela and the council said they believe there will be many legal challenges to the proposed rule changes, similar to the challenges to the rescission of Deferred Action for Childhood Arrivals, a program that deferred deportation for undocumented individuals brought to the U.S. as children.

“I believe that the pushback would not be from just California but will be part of a larger legal coordination,” Valenzuela said.

Homeland Security is reviewing all comments pertaining to the rule changes before implementing them. A decision to enact the changes probably will not be made until well into 2019, according to the report.