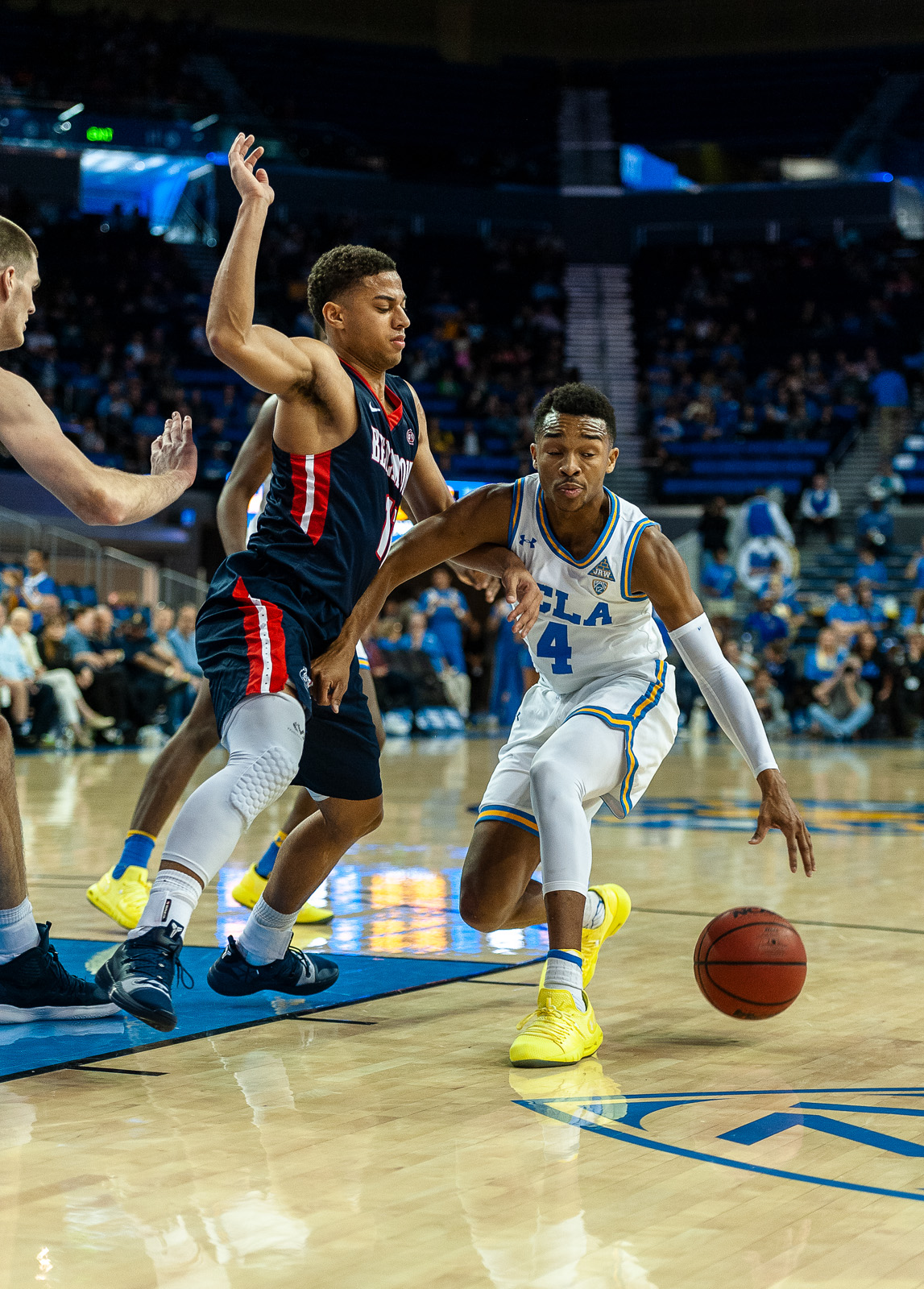 Sophomore guard Jaylen Hands scored 12 points to go along with his eight rebounds and seven assists Saturday night against Belmont. UCLA, however, lost the game after giving up a go-ahead layup with less than three seconds remaining. (Jintak Han/Daily Bruin senior staff)

UCLA men’s basketball (7-3) suffered a 74-72 upset loss to Belmont (8-1) at Pauley Pavilion on Saturday afternoon, handing the Bruins their first home loss since Jan. 13. Coach Steve Alford said the team lacked effort, but he took full responsibility for the outcome following the game.

“I didn’t like our energy, I didn’t like our attention to detail, our enthusiasm,” Alford said. “That falls squarely on my shoulders. I did a really poor job of getting them ready because I thought in our eight, nine, 10 games now, that was the most lethargic, less energy effort.”

UCLA led for over 32 minutes in the contest, but could not execute on the offensive end down the stretch, converting on just nine of its 24 attempts from the free-throw line in the second half. The Bruins also made just two total field goals in the final eight minutes of the game.

Sophomore guard Kris Wilkes said the offense has to do better job of creating opportunities for itself rather than always relying on the guy with the basketball to make a play.

“We’ve got to rotate the ball, move without the ball,” Wilkes said. “Every time somebody passes the ball we all just sit and look at each other. I mean, you can’t score, you can’t get open when you’re doing that.”

The Bruins took a three-point lead into the half after Wilkes poured in 19 points on 8-of-10 shooting, but after scoring just one point in the second half, Wilkes said he too felt partly responsible for the team’s diminished effort late in the game.

UCLA’s lack of effort was not exclusive to the offensive end, however. Belmont scored the game-winning field goal on a backdoor cut with less than three seconds remaining, a play it had been running with continued success in the closing minutes.

Alford said he and his staff did their best to prepare the Bruins for the backdoor cut leading up to the game, but admitted that his team’s inexperience could have been the reason for the consistent breakdowns during crunch time.

“It’s a young group, so maybe we are putting too much on them as far as scouting reports and those types of things,” Alford said. “But I thought we covered the back door and I would guess we gave up three or four back doors in the second half alone, not to mention the last play of the game.”

Despite the frustration of Saturday’s loss on both ends of the ball, UCLA will have to regroup before heading out on the road to face Cincinnati (9-1) and Ohio State (9-1). Redshirt junior guard Prince Ali said the pair of upcoming nine-win matchups will be a good test of resilience for the Bruins.

“We’re about to play two really good teams, especially coming off of what just happened,” Ali said. “So it’s going to show how tough we are, just going out there and just competing.”

The Bruins will tip off against the Bearcats at 6 p.m. on Wednesday night.