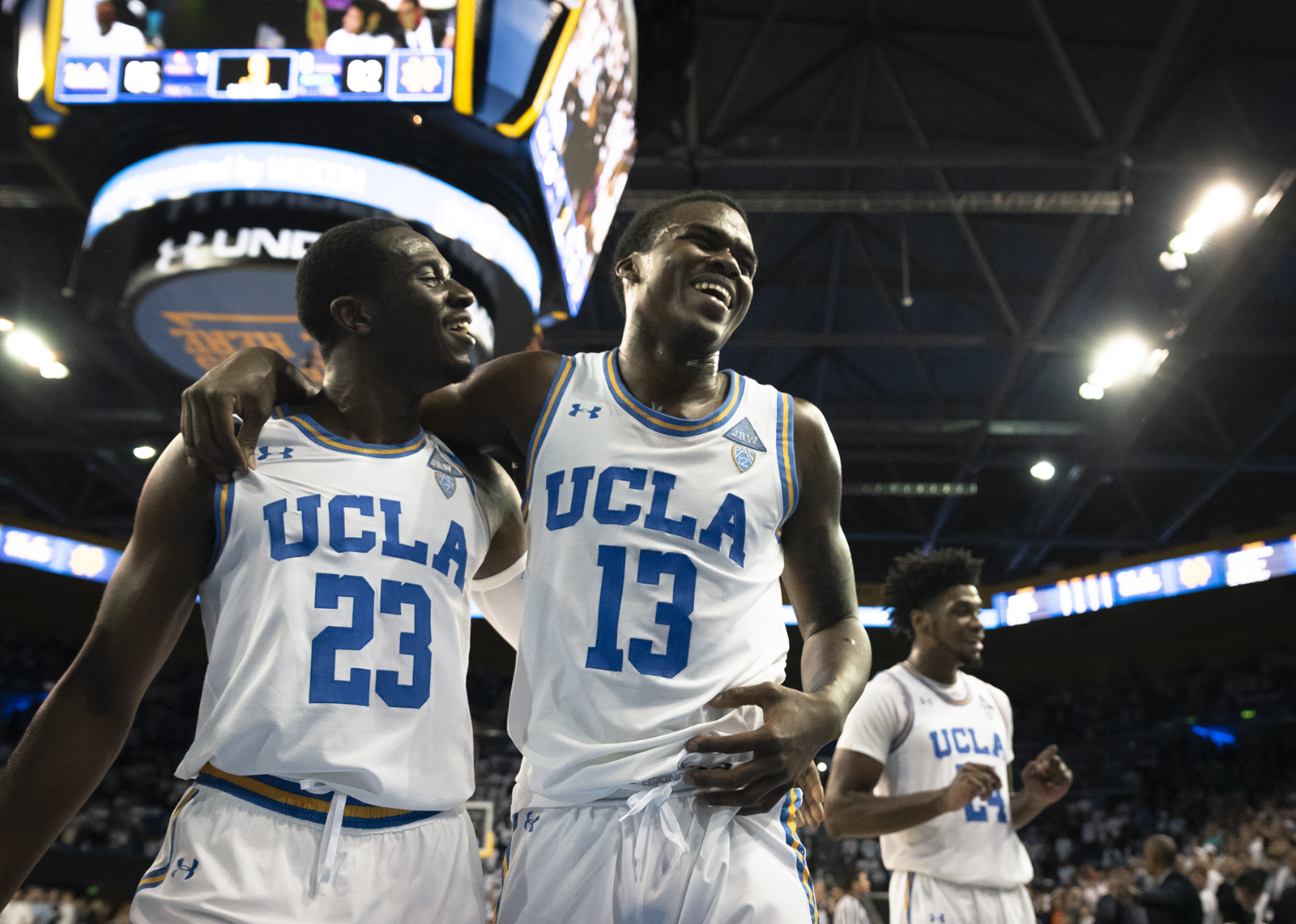 Despite battling calf cramps throughout the night, Kris Wilkes delivered.

The sophomore guard’s game-winning 3-pointer with 0.9 seconds remaining lifted UCLA men’s basketball (7-2) to a 65-62 win over Notre Dame (6-3) on Saturday night at Pauley Pavilion. The victory is the Bruins’ third in a row and their first over a Power Five opponent this season.

Wilkes said he was unsure whether the shot was the biggest of his basketball career, but added that he was happy to see it go in after telling his teammates he would score on the final possession.

“I told the guys before I shot – well at least (freshman forward Shareef O’Neal) – I told him I was going to hit the next shot and I hit it,” Wilkes said. “I took my time like a regular shot and I’m glad I hit it.”

The on-court celebration was short lived for Wilkes, however, as he fell to the floor with a cramp in his leg right after the shot went in. The second-year guard left the game in the opening minutes of the second half to attend to an earlier cramp, but returned just in time to be the hero.

Wilkes also suffered from cramping at the Continental Tire Las Vegas Invitational in a game against North Carolina on Nov. 23. He said he understands the importance of body preparation and will do his best to avoid the issue in the future.

“I gotta learn to start hydrating more and I think they offered me some stuff earlier to help me out before the game and I didn’t accept it,” Wilkes said. “But it’s my job to take better precautions with hydration and stuff, and that’ll help me out.”

Although the last-second win generated plenty of excitement, the Fighting Irish gave the Bruins everything they could handle in the second half, shooting 51.6 percent in the final 20 minutes as they clawed their way back from an 11-point halftime deficit.

With 5:53 remaining in the game, Notre Dame went ahead by four after a 3-pointer from guard T.J. Gibbs, but the Fighting Irish were unable to hold on to the slim lead down the stretch.

Coach Steve Alford said he was impressed by the way his team continued to battle despite the late-game efforts of Notre Dame.

“I give our guys a lot of credit,” Alford said. “For a young, inexperienced group to have a big lead, 14 points to start the second half and then lose it, be down five inside three minutes and find a way to win, that’s growth and that’s what we want to see.”

Jaylen Hands also stepped up for the Bruins on Saturday night after being held scoreless in the first half. The sophomore guard scored all 12 of his points in the second half – including a stretch in which he scored nine straight for the Bruins – and dished out 11 assists on his way to a double-double.

Hands credited his increased assist numbers in recent weeks to the work of his teammates.

The Bruins will return to the court Dec. 15 to host Belmont at 2 p.m.