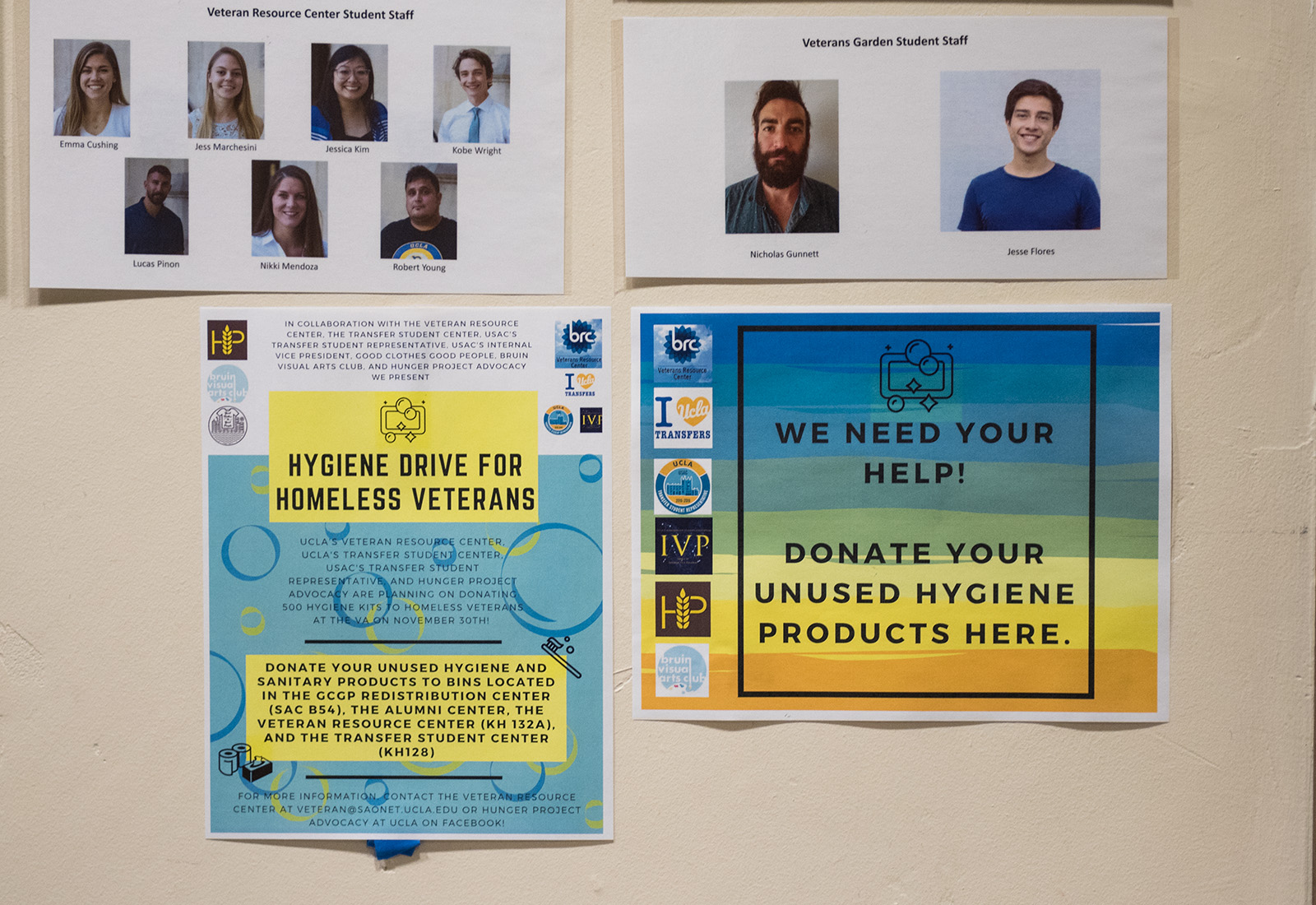 Advocacy groups at UCLA asked students to donate unused hygiene products to create 500 kits, which will be handed out to homeless veterans at the West Los Angeles Veterans Affairs Center on Nov. 30. (Axel Lopez/Assistant Photo editor)

Several groups on campus will team up to donate 500 hygiene kits to homeless veterans in Los Angeles.

UCLA’s Transfer Student Center and Veteran Resource Center, along with Hunger Project Advocacy at UCLA, asked students to donate their unused hygiene products to create 500 kits, which will be handed out at the Department of Veterans Affairs’ West Los Angeles Medical Center on Nov. 30.

The hygiene kits will be distributed during the VRC’s monthly Garden and Grill event. This event helps to replant and weed the garden area at the West LA Medical Center to create a sustainable recreational space for veterans and their families, said Jessica Kim, the Undergraduate Students Association Council transfer student representative.

Kim said working as a staff member at the VRC opened her eyes to the needs of the veteran community.

“I see people at the center and I became a lot more aware of the problems they are facing,” Kim said. “This drive is something we can do as an alternative to just maintaining the garden.”

The kits will include soap, toothbrushes, combs, deodorant, shampoo, conditioner, toothpaste, razors and other basic necessities, Kim said. Volunteers from the VRC and Hunger Project Advocacy will hand out flyers to homeless veterans around Westwood to spread the word in advance of the event.

Kim said an Amazon wish list was shared on social media asking for specific products to be dropped off at various donation bins around campus, such as outside the alumni center and veterans center.

She also said she organized the drive because of her own connection to veterans.

“I’m a dependent of a veteran,” Kim said. “And that was an identity I found on campus, so I’ve been really passionate about working with the Veteran Resource Center.”

Kim added that nearly 8,000 homeless veterans in the Los Angeles area spend the winter holidays on the streets.

“No one should experience the difficulties of not having basic necessities,” Kim said.

Kienna Qin, the Hunger Project Advocacy committee director and a second-year statistics student, said she liked that the hygiene drive was able to highlight a specific homeless population.

“People don’t realize that a large proportion of the homeless population are veterans,” Qin said. “(And) they need things that ordinary people take for granted.”

The groups that collaborated on this project said they were able to spread the news to students by promoting the drive on social media.

“My office’s role in this is to serve as the entity to help publicize the event,” Watson said. “I serve an outreach role so students know where their donations are going.”

The hygiene drive will continue throughout November until the distribution event on Nov. 30.