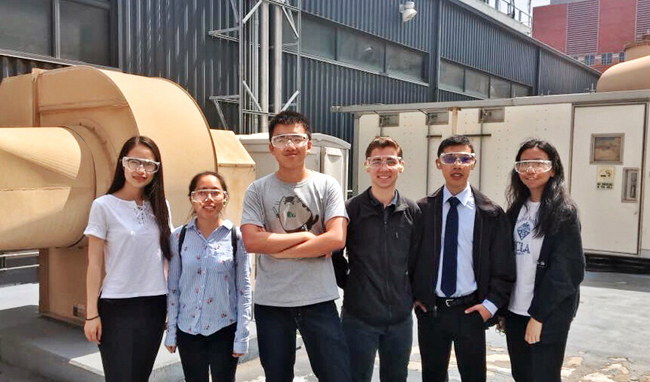 SMACS earned an award for its efforts to promote green chemistry, which is concerned with designing materials and processes to minimize waste and use of hazardous substances. (Courtesy of Maggie Chen/SMACS)

UCLA student chemists won a green chemistry award for their efforts to raise awareness of how chemistry impacts the environment.

The American Chemical Society Green Chemistry Institute award is given annually to chapters of the Student Members of the American Chemical Society that promote green chemistry on their campuses. SMACS chapters must organize at least three activities during the school year involving green chemistry to be eligible for the award. The UCLA chapter was among 15 percent of chapters nationwide to win this award, and will formally receive the award at the 257th ACS National Meeting in Orlando, Florida in March.

SMACS aims to connect students studying chemistry and biochemistry with networking opportunities and mentorship from other students in their major. It also hosts events that focus on green chemistry, an area of chemistry concerned with designing materials and processes to minimize waste and use of hazardous substances.

Maggie Chen, president of SMACS and a fourth-year biochemistry student, said incorporating green chemistry into the club’s activities has increased students’ interest in the subject.

“In terms of green chemistry, we feel like we’ve found creative ways in educating our members,” she said. “More members are aware of green chemistry as an important part of our club, so they’re able to pay more attention (to) their research life or throughout their career.”

Last year, SMACS organized a tour of UCLA’s cogeneration plant to allow members to see how UCLA uses reusable energy to power the campus. This cogeneration plant produces 85 percent of electrical power used at UCLA, according to UCLA Facilities Management.

SMACS recently invited Richard Kaner, distinguished professor in the chemistry department and faculty advisor to SMACS, to lecture members about how research on graphite and supercapacitors can be applied to reducing energy use.

“(Graphite and supercapacitors) are … renewable, reusable and faster at charging and discharging than other batteries,” Chen said. “We host (this talk) every year to educate our members about how you can do research in the field to promote green chemistry … in industry and daily life.”

SMACS also hosted stress-relief sessions for its members with beauty products made of natural materials to educate members about how many common conventional products are harmful to the environment.

Additionally, members of SMACS volunteer at science fairs at K-12 schools in Los Angeles County. In the future, they said they hope to teach the importance and principles of green chemistry to elementary and junior high students.

Chen said she believes that educating young children about green chemistry will make them more aware of environmental issues in the future.

“Before, we were trying to just make it look fun, with colors or making slime, etc. But then we were also thinking about taking green chemistry to elementary or middle schools,” Chen said. “And so educating those in LA County from when they’re little will help build the sense of green chemistry in future generations, hopefully.”

Chen said she believes the prospect of winning the GCI award each year motivates students in SMACS.

“By promoting green chemistry in our club and telling our club members that there is this award that we’re able to win every year, it’s actually (telling) … fellow chemistry or biochemistry students that there is something they can do about renewable energy,” Chen said.

“I think (winning the award) shows that what we’re doing, even if it’s small, does make a difference,” Velasquez said. “So we should just keep continuing, because it can only help.”

Zain Khalifeh, external professional chair of SMACS and third-year biochemistry student, said he believes it is SMACS’ responsibility to educate students about the importance of green chemistry. He said he hopes SMACS’ focus on green chemistry will equip students to tackle issues in green chemistry after graduation.

“(SMACS members) are the ones taking it upon themselves to build a safer world for generations to come,” Khalifeh said.

He said he believes green chemistry is crucial for finding ways to reduce toxic materials released into the environment.

“Our next step is to think outside the box to develop alternative methods to synthesize important chemicals so there are fewer side effects and not as detrimental to the environment,” he said.

“Starting now with young chemists and being focused on this, you can change for future education how we approach it. And so the importance of it is to just educate as of right now, because the fact is we’re not really in charge of really anything yet,” she said. “Once we finally do get into those opportunities and we just think about it and we’re more conscious of it, then we can make more changes.”