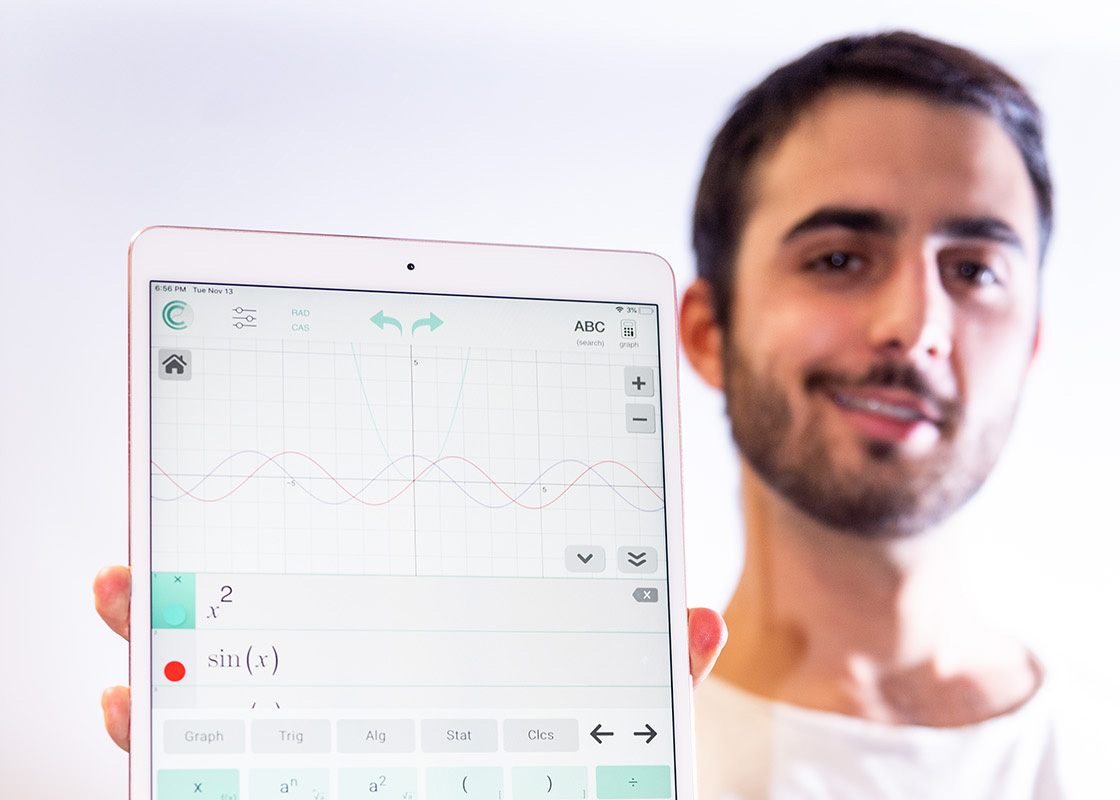 Daniel Haiem, who graduated from UCLA in 2016, created ClassCalc, a free app that has the functionality of both a graphing and scientific calculator. (Liz Ketcham/Assistant Photo editor)

A UCLA alumnus hopes to replace high-tech calculators costing up to hundreds of dollars with a new mobile application.

Daniel Haiem, who graduated in 2016, created ClassCalc, a free app that has the functionality of both a graphing and scientific calculator. Haiem said the app can be customized to make certain features such as matrices and statistics functions more accessible. Since its release in September, ClassCalc currently has around 1,000 users, with 10,000 waitlisted students in school districts that are looking to implement the app in their classrooms.

“We want to provide students with a new-age math tool that’s not only cheaper, it makes math easier. … Graphing calculators came out in (1985) and they have barely changed since then,” Haiem said. “That means that there are 27 years of global innovation … that the calculator hasn’t tapped into.”

In addition to being a cheaper solution to other calculators, which can cost students up to $185, the app allows instructors to prevent students from cheating on tests while using the app, eliminating the need for students to buy specialized high-end calculators for their classes. When professors download the app and register as a teacher, they can turn on “test mode” and invite students in a class to join in the session. If a student attempts to leave the app during the test, the professor is immediately notified. In order to access test mode, each student must pay $1 per month. Professors do not have to pay to use the feature.

Haiem said he hopes to bring the app to UCLA and plans to talk with UCLA faculty and administrators about the feasibility of integrating the app into UCLA’s classrooms. He said he wants to make sure the app is fully optimized for larger courses and that students will be unable to hack the app before he introduces it into higher education.

The app is currently being used in Los Angeles high schools. Alec Gomez, a math teacher at Yeshiva University High School of Los Angeles, has been using a trial version of the app in his classroom for two years now.

“It’s the only calculator I have them use. This year, day one I said, ‘OK, grab your phones, download (ClassCalc), this is your calculator,’” Gomez said. “Once everyone is logged on, I get to see who’s on it and if they attempt to leave it or even accidentally leave it, it tells me.”

Gomez said his ability to change which functions students are allowed to use has improved test taking for his students.

“In the past, I’ve always had to find some clever way of going, ‘OK, you can use your calculators for the first 20 minutes but not the last 20,’ but with the app … with a single button I can log them out of a certain feature and they have to think about it on their own,” Gomez said. “At the end of the exercise, I can restore those features and go, ‘OK, now check your work!’”

Rodrigo Borges de Oliveira, an engineer for ClassCalc, said he thinks his community in Brazil could benefit from the app because calculators are even more expensive in Brazil than they are in America.

“Here in Brazil, the graphing calculators are really expensive. They are ranging from ($250) to $300,” Borges de Oliveira said. “So, I could see myself back in college and think, ‘Wow, how nice it would be to have something so much cheaper and accessible to everyone like that.’”

The company plans on implementing new features, including walk-through style explanations of complex math topics so students don’t have to leave the app to learn specific topics, such as linear regression. With these features, students can simultaneously learn concepts and how to calculate them, Haiem said.