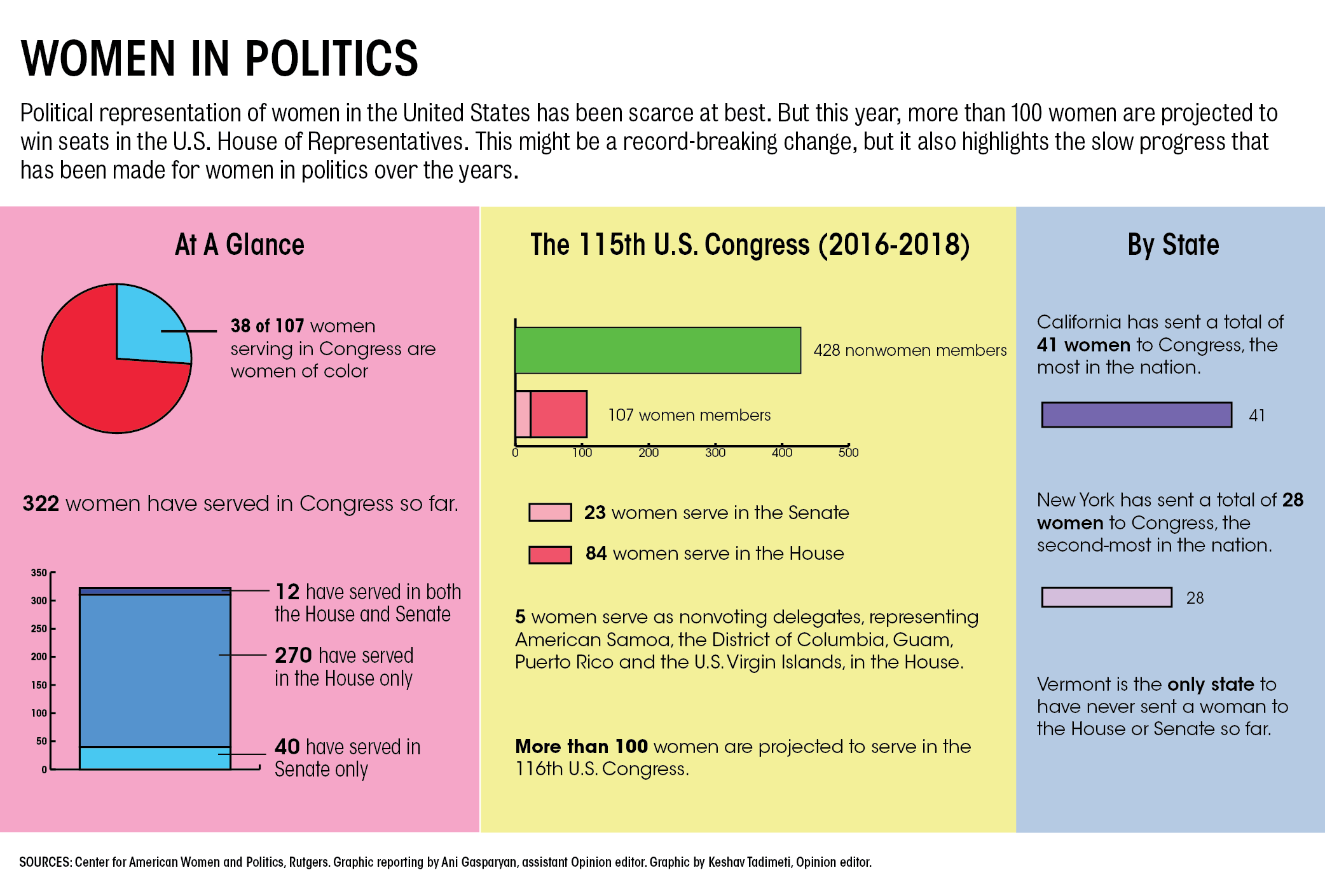 The 2018 midterm elections made significant strides for the Democratic Party. But the same can’t be said for women in politics.

A record number of women ran this year and won seats in Congress. A total of 256 women ran for office and at least 123 of them have won or are expected to win. It’s easy to perceive this election as a big win for women after the 2016 presidential election, in which President Donald Trump spewed sexist commentary during his campaign and won regardless.

While this might lead many to believe that a changing tide in the political world is making politics a more inclusive space for women, that’s definitely not the case. The 2018 midterm elections were just as sexist as the ones before them, despite the number of records women have broken.

Whether it’s Alexandria Ocasio-Cortez, New York congresswoman-elect, having her background called into question; Mallory McMorrow, Michigan state senator-elect, being targeted by sexist political ads; or Stacey Abrams, candidate for Georgia governor, having her qualifications called into question, women who run for office are no strangers to misogynistic backlash from their peers and the general public. And for the 123 women who are likely going to take office in 2019, that isn’t going to ease up anytime soon.

Women largely remain the minority in the political sphere. There are only 23 women in the U.S. Senate and 84 in the House. There are only six female governors and 13 female lieutenant governors. These numbers only shrink the higher we go up the political ladder, and we don’t need another reminder that the country has never had a female president.

Bringing 123 women into Congress doesn’t seem like a very big win in the grand scheme of things – not when there’s still a lot of opposition against women who run or hold office.

Click here to view a high-quality version of the graphic.

Just look at Ocasio-Cortez, who defeated incumbent Rep. Joe Crowley in New York’s 14th Congressional District and became the youngest woman elected to Congress. Despite her win, there’s been no shortage of people questioning if she’s capable of the position – a textbook misogynistic experience for women in politics.

During her campaign, conservative commentator Ben Shapiro condescended to her by challenging her to a debate and offering her campaign $10,000 if she complied. Rep. Ron DeSantis most recently belittled her by referring to her as “this girl Ocasio-Cortez, or whatever she is.” News outlets mocked her for not being able to afford rent in Washington, D.C. when she brought up the issue after winning her election. People have even questioned where she’s from, her class status and her understanding of her campaign platforms. That’s quite the punishment for daring to run for office as a woman.

There’s also McMorrow, who ran for the Michigan Senate against Republican incumbent Marty Knollenberg. Her opponent’s campaign ads depicted her laying on a blanket with a curling iron at her side while holding an iced drink. Beside that was a slogan urging voters not to vote for her. From the ad, the reason she’s incapable of being in the state Senate, it appears, is that she fits into sexist stereotypes.

The hypocrisy against women in politics was also made apparent when Trump called Abrams, who ran for governor of Georgia, unqualified to lead the state – despite having no qualifications himself before running for president. Abrams, by contrast, was the first African-American to lead the House of Representatives and served as minority leader from 2011 to 2017. Her opponent, Republican Brian Kemp, previously served as secretary of state and had been accused of racism and voter suppression throughout his term. This was hardly the treatment given to Jason Carter, the 2014 Democratic gubernatorial candidate for Georgia and grandson of former President Jimmy Carter.

And Jacky Rosen, a Nevada Democrat, also had a similar experience after she had her qualifications called into question when she ran for the U.S. Senate. Her opponent, incumbent Republican Sen. Dean Heller, questioned if she had lied about her computer science degree on her resume and ran an ad stating “No computer degree. She made it up.” He also claimed that a business she had founded didn’t exist, leading Rosen to prove her record. It’s hard to come across an instance of a male politician running patently false ads about another male politician’s college degree. For women, though, it’s a troubling norm.

Women running for office have even been scrutinized on their appearance. According to the Barbara Lee Family Foundation, which advances women’s equality and their ascension into politics, it’s important for women candidates to show voters they are likable and qualified for the position. Their studies also found that voters were influenced by gender stereotypes and paid special attention to how women look and spoke.

These are obstacles that are still very much present despite the historic win for women in this year’s midterms.

Yes, women in the United States are still ticking off firsts. Nancy Pelosi, California congresswoman, became the first woman to serve as speaker of the House in 2007. Hillary Clinton was the first woman to represent a major party in a presidential election in 2016. This year’s midterms had numerous firsts as well. But it’s clear women are still largely unwelcome in politics.

The 2018 midterm elections resulted in more women taking office than in the years prior. These numbers will hopefully increase as Congress becomes more inclusive.

But it’s obvious why there is still so few women taking up positions of political power.