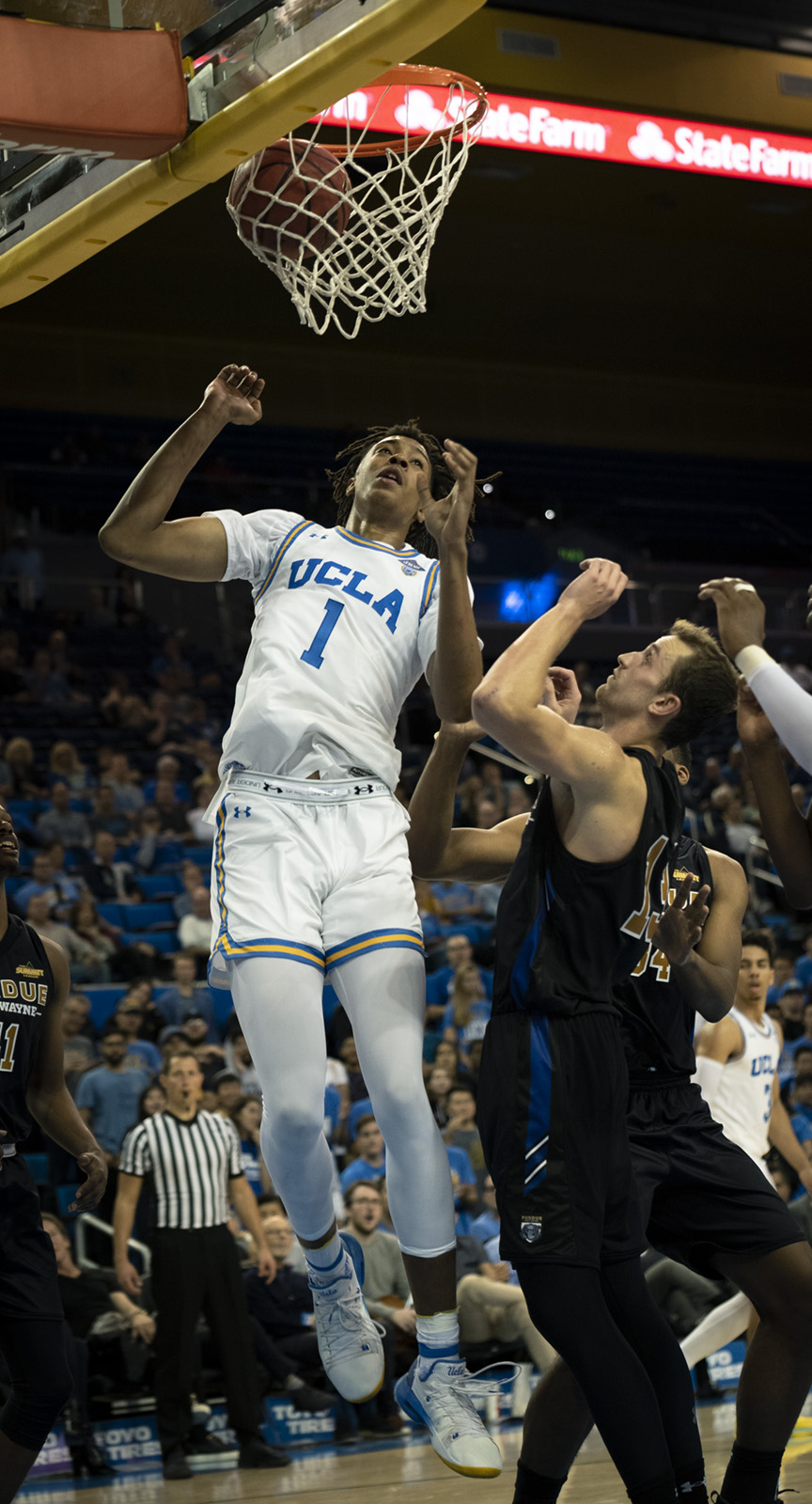 At 7-foot-2-inch, freshman center Moses Brown is the tallest player to play for UCLA men’s basketball in nearly 25 years. He scored 19 points and reeled in 17 rebounds in his NCAA debut against Purdue Fort Wayne on Tuesday night. (Kristie-Valerie Hoang/Daily Bruin senior staff)

Correction: The original version of this article misquoted Steve Alford.

When Moses Brown got to campus in June, he measured in at 7-foot-1-inch.

Then he grew another inch.

“I don’t think he’s ever stopped, to be honest with you,” said Brown’s high school coach, Michael McCleary.

Brown has been the tallest player on the court ever since he first picked up a basketball at the age of seven. His first dunk came in a streetball game at the age of 15 – before most boys are even done with puberty – a moment he said he would never forget.

“I always knew how … but I never had an opportunity to dunk in a game,” Brown said. “So I did that on the fast break.”

There was one time, however, that Brown said he could remember when he didn’t have the height advantage.

But he said he still won the matchup.

“Tallest person I ever played against was 7-foot-4,” Brown said. “It was pretty cool, finally getting to beat up on someone taller than me.”

The freshman center is the tallest Bruin since the 1992-1993 season, but his most recent growth spurt wasn’t close to being his biggest – or his fastest.

“I sat out for a whole summer … my sophomore to junior season … (because) I had injured my growth plate,” Brown said. “By the time I took the cast off, I was 6-foot-11.”

He was 6-foot-7-inches when he put the cast on.

That summer, Brown was forced to sit around the house with his leg propped up. By the time he took the boot off, he had been called up from junior varsity to varsity at Archbishop Malloy High School in Queens, New York.

“I wanted to get on the court and do a lot of stuff I wasn’t ready to do,” Brown said. “Some of that led to frustrations … but it also showed me to just keep working harder and have patience in my development.”

Brown was able to make a name for himself in recruiting circles around the country, earning unanimous five-star grades and national attention. He was named a McDonald’s All-American in the winter and averaged 13.9 rebounds per game as a junior in high school and 17.0 per game his senior year.

McCleary said Brown – who averaged 26.0 points per game his senior year – was able to move up to varsity due to his size and improved stamina. However, the high school coach also said, like other top recruits, the future Bruin didn’t always want to spread the wealth.

“He wanted the ball a lot,” McCleary said. “He wanted to be the one who shot it, as opposed to somebody else. He was an aggressive scorer.”

While McCleary said Brown’s strong suit was scoring, and his rebounding numbers helped put him on the map, UCLA coach Steve Alford said what made Brown stand out was his defense. The center averaged six blocks per game in his final season at Malloy, and Alford said Brown was the defensive anchor UCLA needed with the graduation of former center Thomas Welsh.

“He’s a shot blocker,” Alford said. “We’ve not really had a rim protector … (former UCLA center Ike Anigbogu) would be the closest to that, but (Anigbogu) as a freshman only played 13 minutes (per game), and we’re obviously going to ask (Brown) to do a lot more than that.”

In Anigbogu’s one season on campus, he never played more than 25 minutes. Brown played 28 minutes in the Bruins’ season opener against Purdue Fort Wayne on Tuesday night.

Brown already surpassed Anigbogu’s career highs of 12 points and 9 rebounds with his breakout 19-point, 17-rebound debut. His four blocks against New York Institute of Technology was higher than Anigbogu’s career average of 1.2 per game.

In his two appearances so far in a UCLA uniform – the season-opener and the preseason exhibition against New York Institute of Technology – Brown has dunked the ball 11 times, but Alford said his ability to throw down isn’t what makes him special for someone his size.

Brown was the No. 27 recruit for a reason; he has NBA potential. But the 19-year-old didn’t want his goals to begin and end with getting drafted.

“I definitely want to be a professional athlete, go to the NBA, win some championships, be a Hall of Famer – all that stuff is cool,” Brown said. “But I’ll probably want my name up (in the rafters) one day, to retire my jersey.”

Brown’s new coach smiled when he heard that he wanted his name up in Pauley Pavilion beside the likes of big-man legends Bill Walton and Lew Alcindor.

“Well, that’s a lofty goal, but we like lofty goals around here,” Alford said. “He’s got a lot of work ahead of him, but I have a lot of respect for (Brown). He works awfully hard, so we hope things work out well for him.” 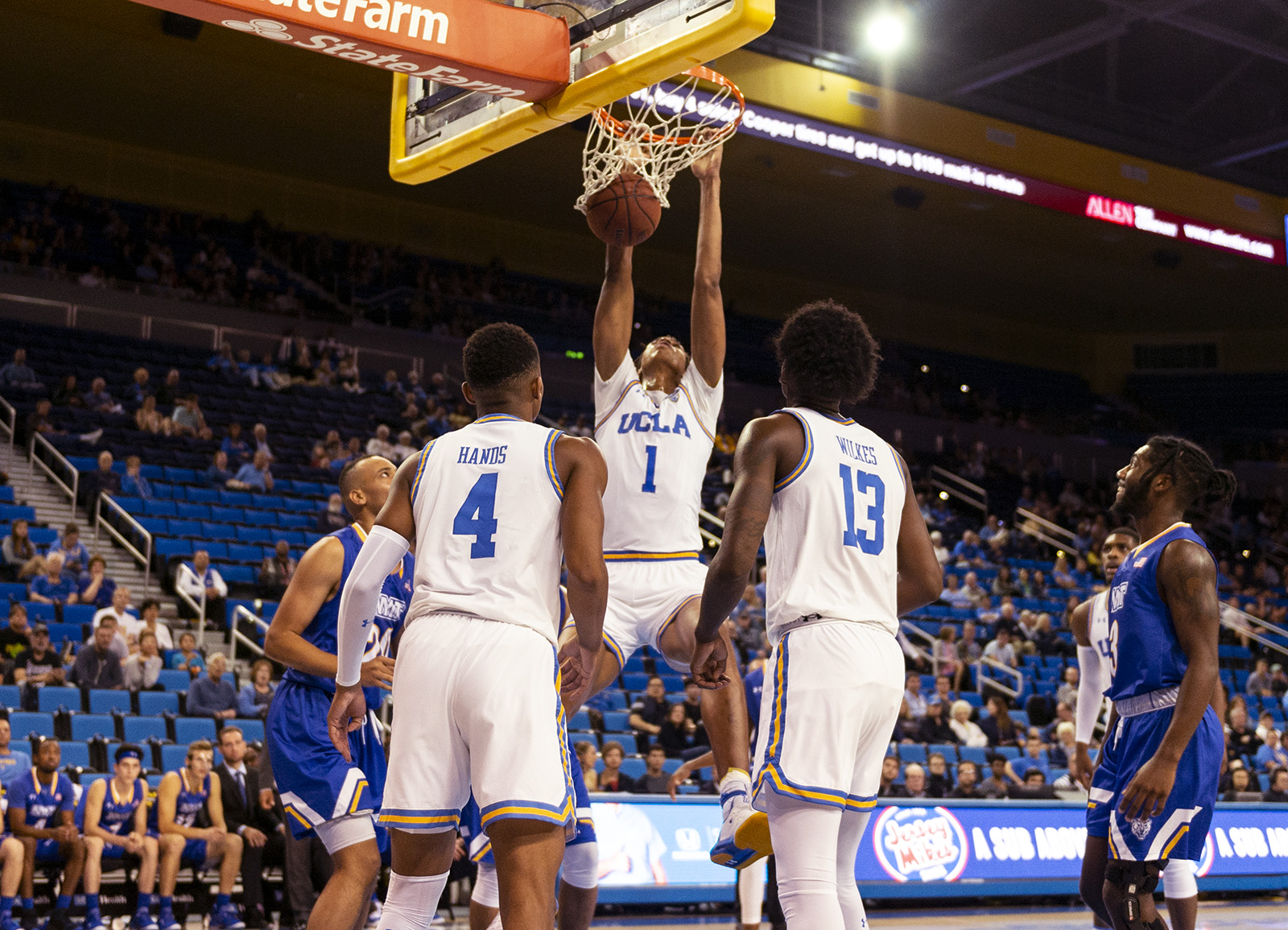