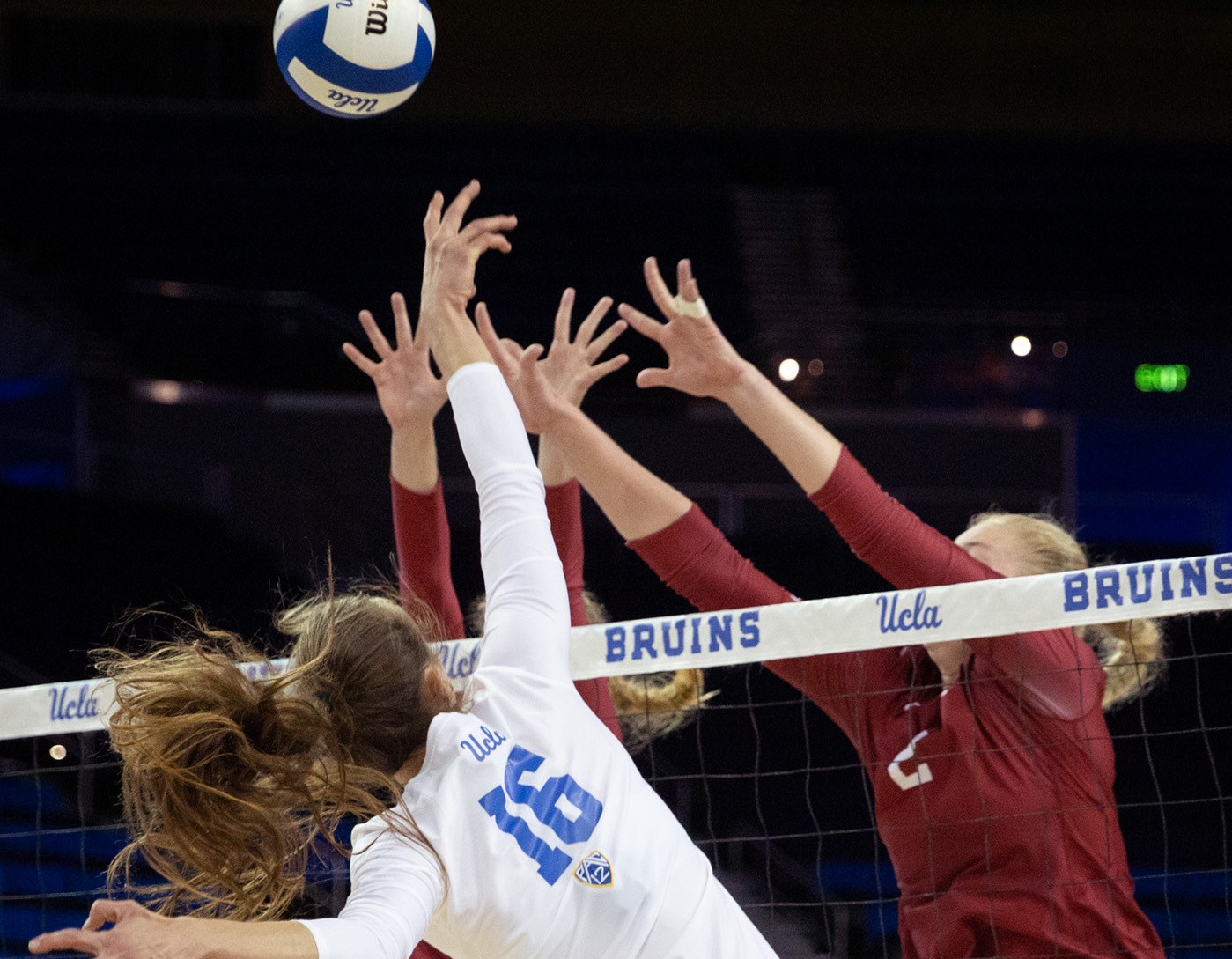 Junior middle blocker Madeleine Gates leads the Bruins on the year with 84 total blocks and is third for UCLA in total kills with 182. Gates and the Bruins will face Washington State and Washington this week for the second time this season. (Jenna Nicole Smith/Daily Bruin)

It’s deja vu for the Bruins.

“We’re at a similar place as we were last year in terms of wins and losses,” said junior middle blocker Madeleine Gates. “Pac-12’s been even crazier this year as everyone is beating each other.”

The Bruins were 13-8 and 6-6 in the Pac-12 at the same juncture last year. Like last season, UCLA suffered conference losses against USC, Stanford and Washington State, and secured wins against California, Arizona and Arizona State.

The Cougars have won five of their past six matches and swept the Bruins in Washington on Oct. 21. Washington State is led offensively by outside hitters McKenna Woodford, who averaged a team-high 4.30 kills per set in October, and Taylor Mims, who leads the Cougars in kills per set with 3.85 on the season.

Mims sat out in one of her team’s earlier matchups with a lower leg injury.

“Washington State will be a different team,” said coach Michael Sealy. “They had a key injury last time so they’ll have a different lineup that will make them better.”

The Bruins had their second largest attendance of the season against Washington, with 3,113 people watching.

“Home court is a huge thing, especially at Washington and Washington State,” said junior setter Kylie Miller. “They have good crowds that are rowdy, so we’re excited to be back at home.”

Against the Huskies on Oct. 19, sophomore outside hitter Mac May had 13 digs and a season-high 27 kills in the 3-1 win. Miller recorded 52 assists and eight digs in the match.

Washington is on a two-game winning streak after losing five straight. UCLA is 23-10 overall at home against Washington, including a four-game losing streak at Pauley.

May is leading the Pac-12 in service aces per set with 0.47 in conference matches while senior libero Zana Muno is pacing the conference with 5.41 digs per set in Pac-12 play. The Bruins are forcing the second-lowest opposition hitting percentage in Pac-12 play at .202.

“On-court chemistry is continually getting better every time,” Miller said. “We’re still getting used to passing rotations, but we’re communicating so it’s good.”

“Stanford is obviously the pinnacle team,” Sealy said. “After that, it’s very competitive. We’re frustrated about a few matches that we didn’t play well in, but ultimately, you’re preparing for qualifying for the NCAA tournament.”