Over half of all UCLA elevators have outdated permits, riders cite malfunctions 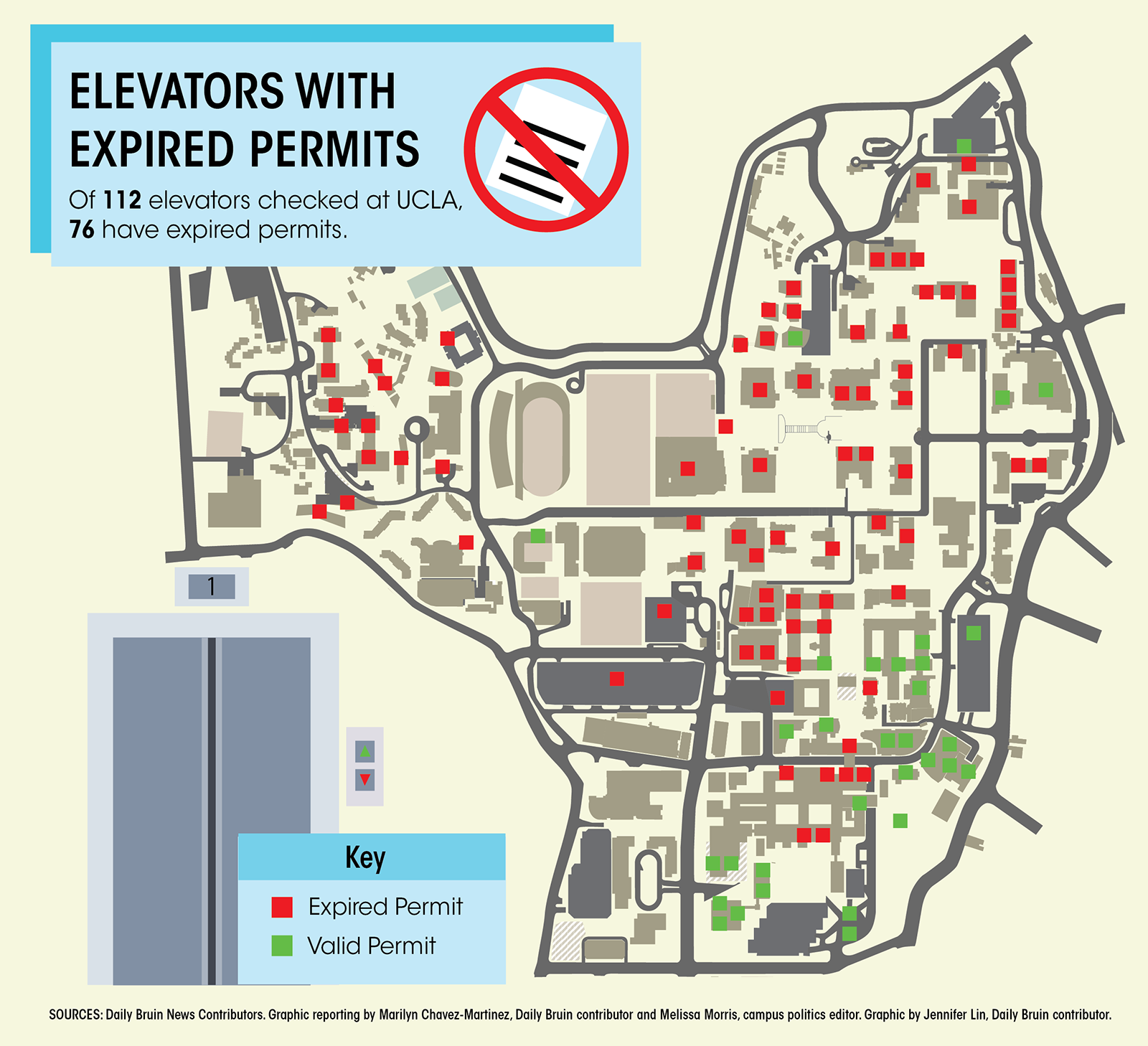 Jaredd Franco said she was trapped in an elevator in Rieber Hall for two hours with 11 other students during the 2018 Transfer Summer Program.

Franco, a third-year political science student, said in an email statement the students were able to contact the front desk of Rieber Hall with the elevator phone, but were consistently given incorrect or misleading estimated times of arrival for the elevator mechanic.

A majority of posted elevator permits at UCLA are expired.

Out of 531 elevators on campus, approximately 61 percent do not have up-to-date permits posted, according to data from UCLA Facilities Management. However, Erik Ulstrup, the senior superintendent of electrical systems, said his data may not be entirely up to date.

“They are never going to be 100 percent up-to-date because it takes the inspector more than a year usually to get through campus,” Ulstrup said. “They have somebody dedicated now, so they’re doing a lot better job getting the job done.”

Expired permits can still be valid until the state returns to inspect the elevator, as long as another inspection has been requested, Ulstrup said. He added he has already communicated the school’s needs to the state.

The California Department of Industrial Relations, who is responsible for updating permits, did not respond to request for comment.

Permits issued are typically valid for one year following inspection, or until the state inspector inspects the elevator, but Bruin staffers found some posted permits that expired in 2013.

“If there is an entrapment of some sort it’s usually a malfunction of the equipment,” Ulstrup said.

He added that since campus elevators are computer-operated, entrapments can be a symptom of the new technologies.

Julia Ho-Gonzalez, Undergraduate Students Association Council Facilities commissioner, said in an email statement that USAC FAC has not received reports of outdated elevator permits, but she is aware of elevator malfunctions, especially on the Hill.

According to data compiled by Bruin staff, of the 15 housing elevators examined, four of them have an expiration date earlier than the current year – including elevators in Rieber Vista, De Neve Gardenia, Sproul Cove and De Neve Acacia.

According to the Department of Industrial Relations, a reinspection allows a certified safety engineer to review the elevator’s maintenance in order to verify its compliance with state regulations and run periodic tests, if they are required.

Franco said she did not use an elevator for two months after the incident, and she is still concerned for her safety by using expired and malfunctioning elevators on campus. Since the incident, she said she has been stuck on a UCLA elevator on multiple other occasions as well.