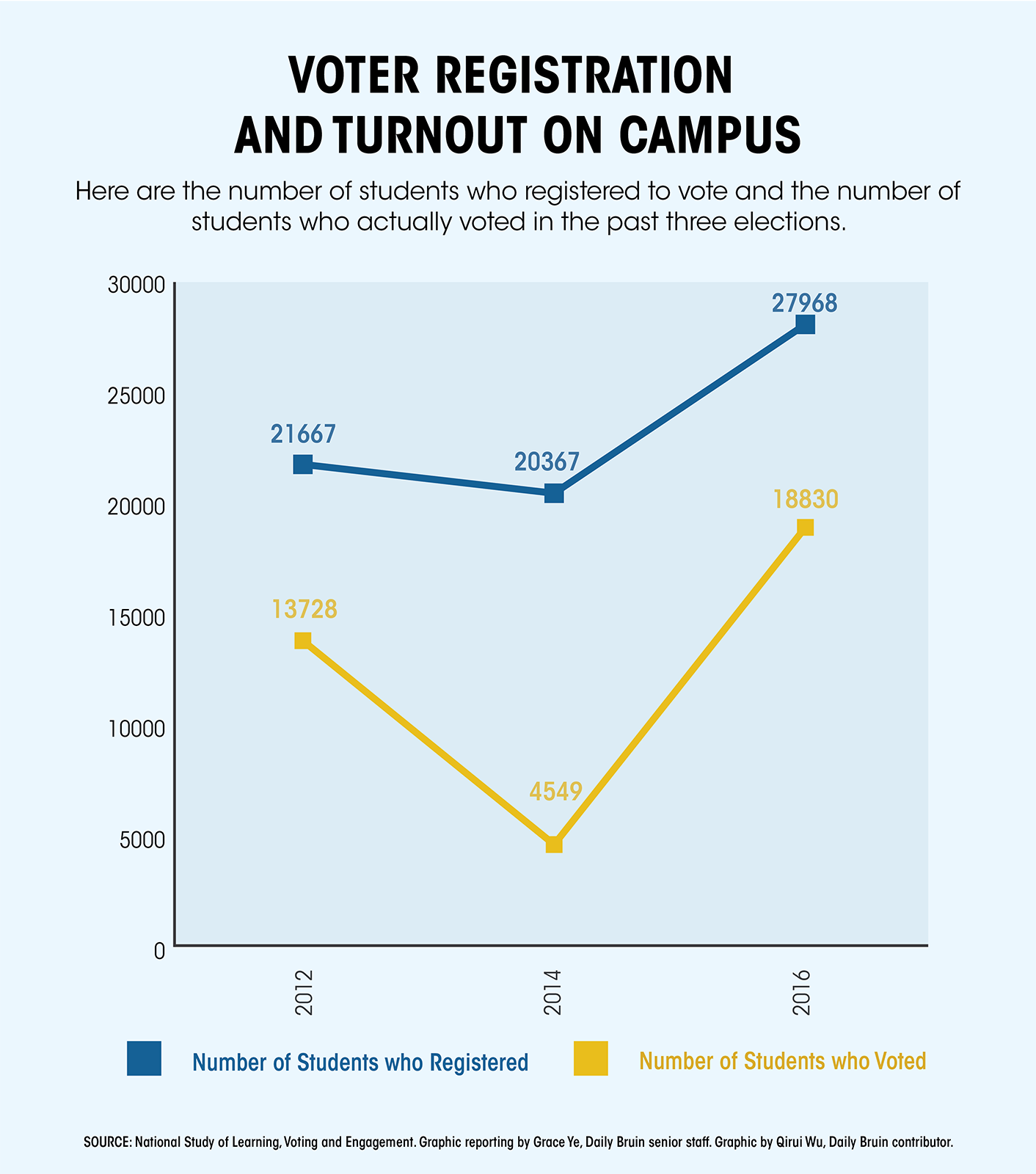 UCLA students and faculty said they think the United States’ heated political climate has encouraged students on campus to be more civically engaged.

They’re just hoping that this will also translate into greater voter turnout.

Voter turnout in the 2014 midterm elections was the lowest it had been in the country since World War II. Only about 36 percent of the voting-eligible population decided to turn in their ballots.

And UCLA didn’t do any better. According to a report by the National Study of Learning, Voting, and Engagement, only 13 percent of students voted in 2014.

However, Cynthia Lebow, a political science lecturer, said she’d be surprised if Tuesday’s voter turnout rate would be anything like the 13 percent figure UCLA saw in 2014. Instead, as a rough estimate, she said she guesses voter turnout will be something more like 20 or 25 percent.

She said she’s aiming to get 100 percent of her own students to vote.

“I think this is a very important time in our country’s history, and so I’ve done everything I can to encourage students in my class to participate and vote,” Lebow said.

Based on her interactions with students and faculty members, Lebow said she’s sensed a great interest in voting in Tuesday’s election. She said she attributes this in large part to the decisions made by the current administration under President Donald Trump.

“I think a lot of (Trump’s) policies personally touch people. It’s not just tax policy or economic policy; it’s things that genuinely affect people’s families (like) immigration policy, health care policy,” she said. “And so these are things that really hit home with students.”

Although Lebow is only teaching one political science class this quarter, she said she’s had many students come up and ask her about current events, such as when Trump announced he would end Deferred Action for Childhood Arrivals. Most recently, she said many students have been asking her about Trump’s announcement regarding potentially ending birthright citizenship.

“My email kind of lit up yesterday over students past and present inquiring, ‘What does this mean? Could this happen?’” she said.

The class Lebow is teaching is Political Science 145B: “Public Law and Judicial Process: Constitutional Law–Separation of Powers,” which she said is all about executive power and the power of the president.

Students also agreed that controversial decisions made by Trump’s administration may have motivated more students to be politically engaged these past few years.

Arden Dressner Levy, co-director of the UCLA BruinsVOTE! Campaign and a second-year geography student, said she feels students are more inclined to vote this year than they were in 2014.

“President Trump is a very polarizing figure,” she said. “BruinsVOTE!, we’re a nonpartisan organization – we want everyone to vote regardless of their party affiliation – but I definitely think that we noticed that, on all sides of the political spectrum, President Trump has gotten people more rallied up.”

However, Levy said she was uncertain as to whether this polarization would translate into higher turnout, though she hopes that it will. She said she and others in BruinsVOTE! have been and will be doing their best to encourage students to turn in their ballots by going to classrooms to remind people to vote, flyering on Bruin Walk, hosting events and sending out emails.

Anna Simpson, a first-year global studies student, also said she was unsure whether reactions toward Trump’s administration would motivate people to vote.

“I feel like it could go either way,” she said. “People are either discouraged and feel like their opinion isn’t heard, or they feel like now they need to do something to help change our government.”

Regardless, Simpson said she believes voting is important and signed up to vote via absentee ballot as a resident of Maryland.

“(I think it’s important to vote) because that’s the democratic process. If you don’t participate, then other people are just going to speak for you, and that’s definitely what you don’t want,” she said. “That’s how Trump gets elected.”

However, while some students cited voting as a means of change, second-year political science and history student Chase Kunaschk said he doubted whether voting in a midterm election in a traditionally Democratic state like California could really alter the trajectory of the U.S. government.

“In this state, (voting) probably doesn’t really matter in my honest opinion, … mainly because it’s Democrat vs. Democrat, and any policy decision is ultimately not going to be made by the individual members but whatever the party line is for that particular vote in the House or Senate,” he said.

So, although Kunaschk said he is registered and plans to vote, he said he has yet to decide who he’s voting for. He said he doesn’t know who’s running for the Senate seat, but guessed that the race was between two Democrats.

Vlada Furman, a fourth-year biology student, said she hopes the idea of California being a dominantly blue state won’t hinder people from voting and expressing what they believe in.

“I think it’s important to get all sorts of different viewpoints of who’s actually living in the country and community,” she said. “I feel like a lot of the times there’s this generalization, like, ‘Oh, California’s super liberal,’ or oh, like I don’t know, Texas or something is super Republican. … And with those generalizations, I feel like people just vote all liberal or all Democrat instead of actually caring what they vote for.”

Whatever opinion students may have about the current political position of the United States, Lebow said she hopes it will motivate them to show up to the polls.

“(Voting) is our central function as citizens of the United States. Tweeting, Facebooking, expressing opinions through social media is not going to change the course of the country,” she said. “The only way to do that is to vote. And that’s how you can really express your point of view, whether you want the status quo or you want to change.”