Throwback Thursday: Undeclared students had difficulties choosing a major amid many class offerings 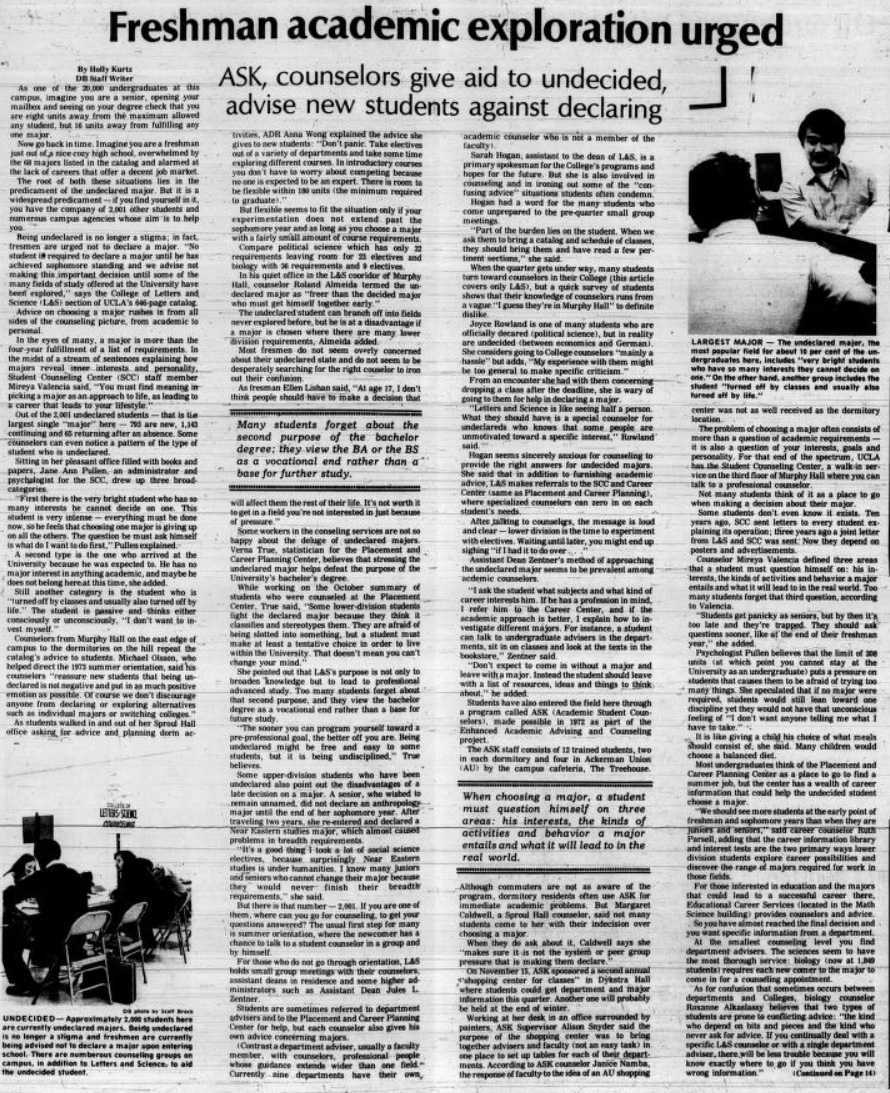 We’ve just gotten through the first round of midterms this year, which means everyone’s mind is on the same thing: next quarter’s classes.

It can take a long time to scout out the right classes, check BruinWalk to find the right professors and identify a way to fit those classes into one cohesive schedule.

But one group has always faced more difficulty than others when beginning this quarterly ritual: undeclared students.

After all, how can it be easy to pick your classes when you haven’t even picked a major?

There is no good reason to declare a major when you’d rather take some additional time to decide. Holly Kurtz, a then-staff writer for the Daily Bruin, told students just that as far back as Feb. 8, 1974. Kurtz’s piece aimed to showcase the resources available to undeclared students – to show there was no stigma surrounding the classification.

At the time, UCLA had been encouraging students not to immediately declare majors.

“No student is required to declare a major until he has achieved sophomore standing and we advise not making this important decision until some of the many fields of study offered at the University have been explored,” Kurtz quoted from UCLA’s course catalog, a thick book that amounted to 646 pages at the time.

Many students commented they thought choosing a major was a hard decision to make, especially considering it would affect the rest of their lives. Then-first-year student Ellen Lishan told The Bruin she thought students should be able to take the time they need.

“At age 17, I don’t think people should have to make a decision that will affect them the rest of their life,” Lishan said. “It’s not worth it to get in a field you’re not interested in just because of pressure.”

Forty-four years later, students are making the same points about self-discovery and committing to certain fields of study.

Moreover, many students today can feel swamped by the number of options. UCLA offers more than 125 majors and more than 90 minors. It can be hard to decide between so many options, especially given how interesting they all might seem, and how fluid the boundaries can be between the campus’ fields of study.

There are still remnants of the previous century, though. Back in 1974, UCLA offered the Student Counseling Center, a walk-in service in Murphy Hall where students could talk to professional academic counselors. Unfortunately, most students told The Bruin they didn’t see the center as the place to go to make a decision about their major. The Bruin also reported some students didn’t even know the center existed.

UCLA still offers academic counseling today – though if you’re looking to choose your major without paying a visit to Murphy Hall, just remember Kurtz’s advice: Choosing a major is “a question of your interests, goals and personality.”

So don’t worry if you don’t get it right the first time.