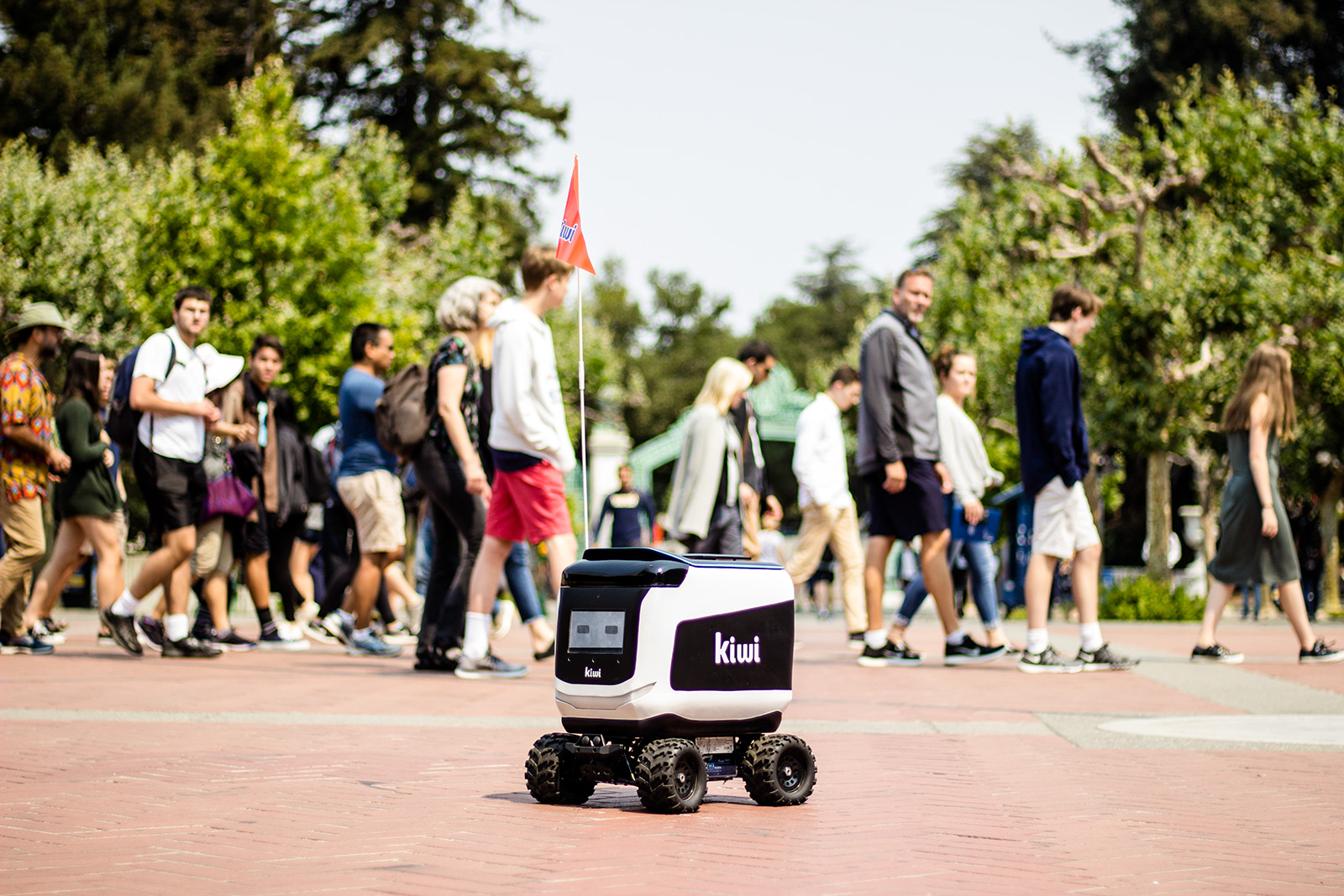 A food delivery startup recently traveled from Berkeley to Westwood with mixed reviews from students so far. (Courtesy of Kiwi Campus)

Printer-sized robots are rolling through the streets of Westwood, carting food orders to students at a fraction of the price of a normal delivery. However, if past experiences at other college campuses are any indication, they may be met with pokes, prods and kicks.

The delivery service has been at Berkeley for almost two years and has about 100 robots delivering food around the campus, Zambrano said. Still, some of them have been damaged by curious people testing the limits and endurance of the robots, said Josh Hooks, a UCLA mechanical engineering graduate student who specializes in robotics.

Although UCLA currently only has a couple of robots, as more robots arrive, Hooks said he thinks they might experience similar difficulties operating in Westwood.

“I know that when I was on the Berkeley campus for less than an hour, I saw someone with a bike slam into (a robot) just to find out what happens when you make it go flying,” Hooks said.

Zambrano said homeless individuals in Berkeley have also kicked or even tried to steal the robots off the streets. However, she added that people have in general become more accepting of the robots as people have gotten used to them.

Hooks said he thinks people do not understand how to interact with robots because there are no set boundaries or norms for those interactions.

“People don’t think it’s a crime. I think there’s a disconnect because it’s a robot,” Hooks said. “If you took food from a human, it’s very easy to understand that that was a crime, but if you mess with a robot, people are kind of disconnected from that.”

Hooks said that robots such as those used by Kiwi Campus could encounter a number of difficulties because they are used outside of the controlled space of a laboratory.

“It’s really hard to go from inside a lab where you control the whole space to what they’re doing … where you go out in the real world where you don’t get to control the cars, the people, even the sidewalks,” Hooks said.

Hooks added that being on a college campus, in particular, could be difficult for the robots. He said that when people interfere with the robot, it can take a much longer time to deliver the food.

“With regular food delivery, your normal food delivery person doesn’t get harassed every time. There’s plenty of videos out there already on a lot of the food service (robots) where people just mess with it,” Hooks said. “Honestly, people surround it and then start poking it and that is going to cause some serious delays.”

Students on UCLA’s campus said they have experienced delays in receiving their food items from the service.

Nipul Jayasekera, a fourth-year linguistics and computer science student, said he encountered many delays the first time he used the service and, after calling customer service, ended up receiving his delivery by bike.

The second time he ordered food, he said it took an hour for the robot to arrive, but it was still cheaper than other delivery services.

“There’s benefits for both (human and robot deliverers),” Jayasekera said. “I would still probably use Postmates … but whenever (Kiwi Campus) has promos that are … cheap, I would use (Kiwi Bots) instead.”