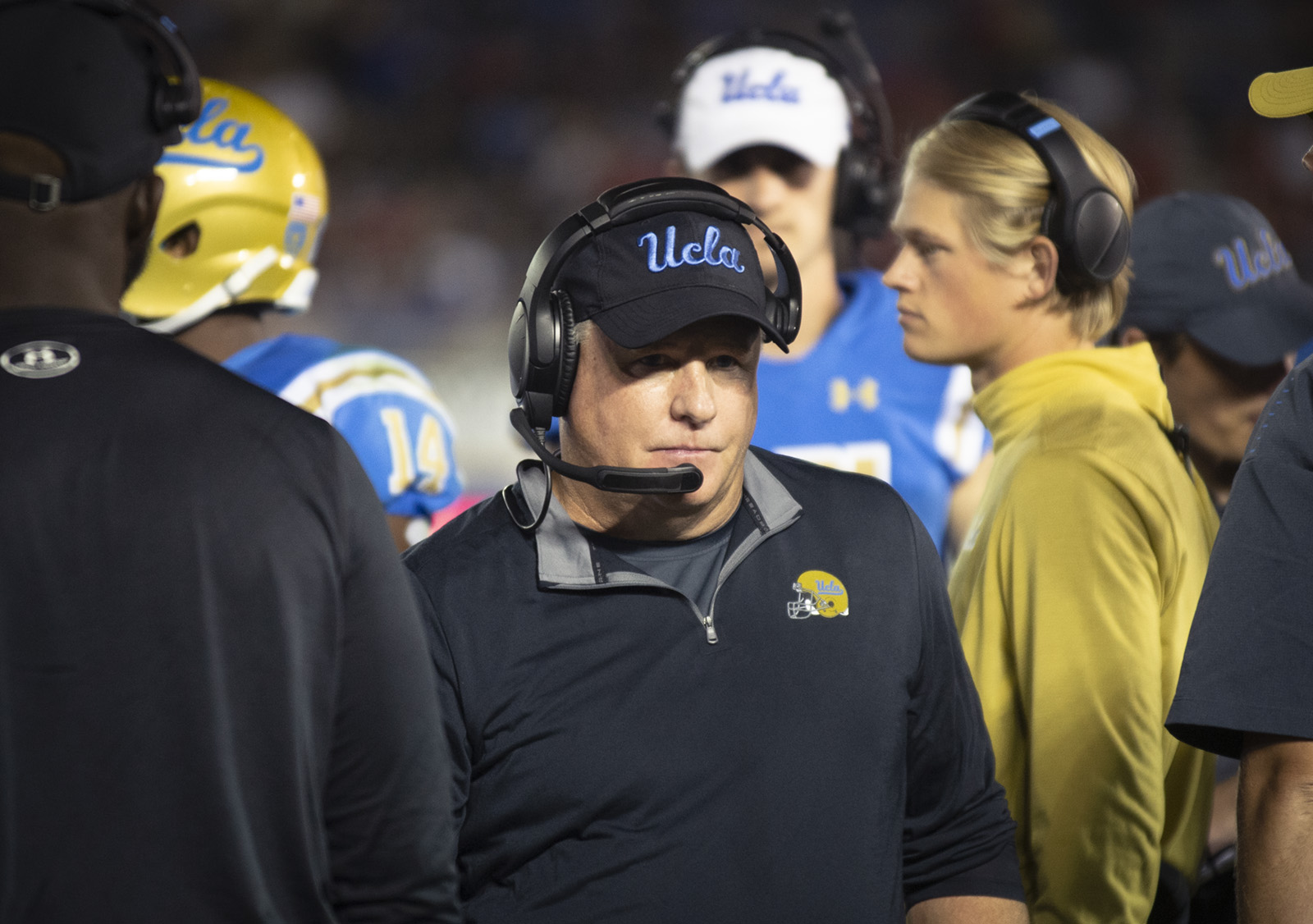 UCLA football coach Chip Kelly will be making his return to Oregon on Saturday after leaving the school in 2013 for the NFL. Kelly accumulated a record of 46-7 in four seasons as the Ducks’ coach and appeared in two Rose Bowls. (MacKenzie Coffman/Assistant Photo editor)

Chip Kelly will be returning to Oregon on Saturday for the first time as a coach since he left the Ducks for the NFL in 2013.

The first-season UCLA football coach went 46-7 during his tenure at Oregon, and said he is looking forward to being back in Eugene this weekend.

“I had a great run there for the six years that we were there,” Kelly said. “There were awesome people at the university and in the community, so I’m excited to go back.”

The Ducks – like the Bruins – are 2-3 in Pac-12 play with only a month to go in the season. With the season on the line for both teams, Oregon’s home-field advantage could make the difference.

The Ducks are 50-10 at Autzen Stadium since 2010. Kelly said that although the crowd can be tough to deal with for a visiting team, UCLA should be enthused for the opportunity to play in front of such an engaged fan base.

“That crowd’s unbelievable up there,” Kelly said. “But if you’re a competitor you’re excited about it because it’s an awesome environment to be a part of and it’s one of the special things that these guys will remember for a long time.”

Junior wide receiver Theo Howard said Kelly’s return has given the Bruins an extra boost of confidence in practice this week in addition to the chance to play at Autzen.

“Every game is a big game obviously, but definitely I know for (Kelly) this is probably hitting a soft spot,” Howard said. “I look forward to playing these guys because I have never – we, as a team – and I’ve never played in Autzen Stadium,” Howard said.

Redshirt senior punter Stefan Flintoft is leading the Pac-12 in yards per punt this season at 46.8. That mark is 3.2 yards further than the second-best average in the conference.

Flintoft said he felt like he got off to a slow start in the opening weeks of the year, but added he returned to his expected form after learning to trust himself and his technique.

“I was just rushing a little bit in my operation time and stuff and I’m a very rhythmic punter, so if it doesn’t feel right, the kick is probably not going to be right,” Flintoft said. “So I think I was just kind of rushing it a little bit, maybe trying a little too hard, but ever since then, I’ve just focused on staying relaxed, turning my mind off, letting my body do what it knows to do and so far, it’s been working.”

Flintoft’s performance on the field has earned him a scholarship.

The redshirt senior punter said while he is grateful for the recognition, he is focused on getting the most out of his final weeks as a member of UCLA football.

“I definitely didn’t see it coming when I first got here, that’s for sure,” Flintoft said. “But I’m very happy with it, I know my parents are extremely happy with it too, but I’m just along for the ride. I’m happy with leading it but we’ve still got four more weeks guaranteed so it’s four more opportunities to get some wins and keep the average high and help my team as much as I can.”