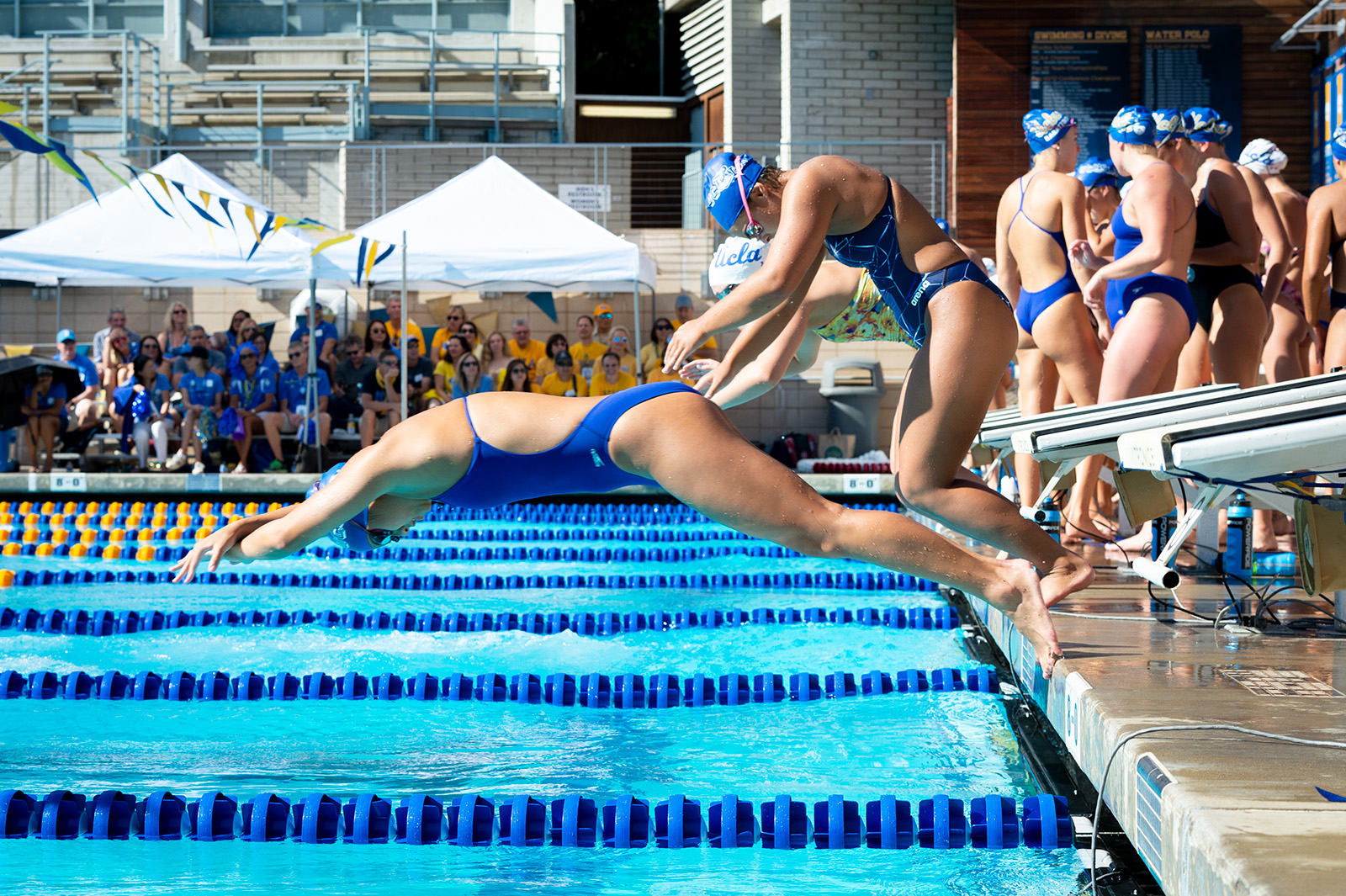 UCLA swimming and diving took home a 156-144 win at Utah on Saturday to kick off its season. (Niveda Tennety/Daily Bruin)

A new season has begun.

“Utah had put up some really good times (last week) against USC, so I knew that we were going against a lot of great competition,” said swimming coach Cyndi Gallagher. “(They have) a lot better (of a) team than they’ve had in the past.”

Redshirt senior diver Maria Polyakova returned to the lineup after not diving for the Bruins last season and won both the 1-meter and 3-meter diving events, scoring 310.13 and 308.40, respectively.

“We handled the situation well,” said diving coach Tom Stebbins. “I don’t think it’s ever easy to go to a new pool (and) be ready to go right away, but I thought that they navigated that part of it pretty well.”

UCLA took home wins in eight of the 14 swimming events. The first win of the day was secured by senior Sandra Soe who finished the 1000-meter freestyle with a time of 10:17.76.

“She had a fantastic meet,” Gallagher said. “She’s a great leader, she works hard, she’s positive (and) she’s got all the Bruin values that you could ever hope for in a leader.”

The Bruins also racked up points in the backstroke events, winning the 100-meter and 200-meter backstroke.

Senior Emma Schanz recorded a time of 56.35 to take the 100-meter. Sophomore Jennifer Lathrop and freshman Abriana Howard took third and fourth place with times of 57.35 and 58.09, respectively.

The 200-meter backstroke was claimed by freshman Mara Newman who posted a time of 2:02.30. Newman was one of three freshmen to take home wins at their first collegiate meet, as freshman Claire Grover won the 100-meter freestyle and freshman Delaney Smith snagged the 200-meter IM.

“Our upperclassmen really do a good job of guiding the freshmen on how college meets go,” Gallagher said. “The freshmen are out there having fun, which kind of makes everyone else have fun.”

UCLA completed the meet with a team win in the 200-meter freestyle relay, made up of Grover, freshman Ella Kirschke, junior Amy Okada and junior Kenisha Liu.

“(It) was incredible,” Gallagher said. “That’s one of our better relays, so it was kind of fun to be so strong in that and the freshmen stood out.”

While UCLA will host No. 21 Arizona and No. 24 Arizona State next weekend, Stebbins said the Bruins continue to look toward later in the season.

“We train through most of the things we have coming up, and then if we get wins along the way, that’s great, and if we don’t, that’s okay too,” Stebbins said. “It’s just about trying to get ourselves into the best position to be excellent in February and March.”