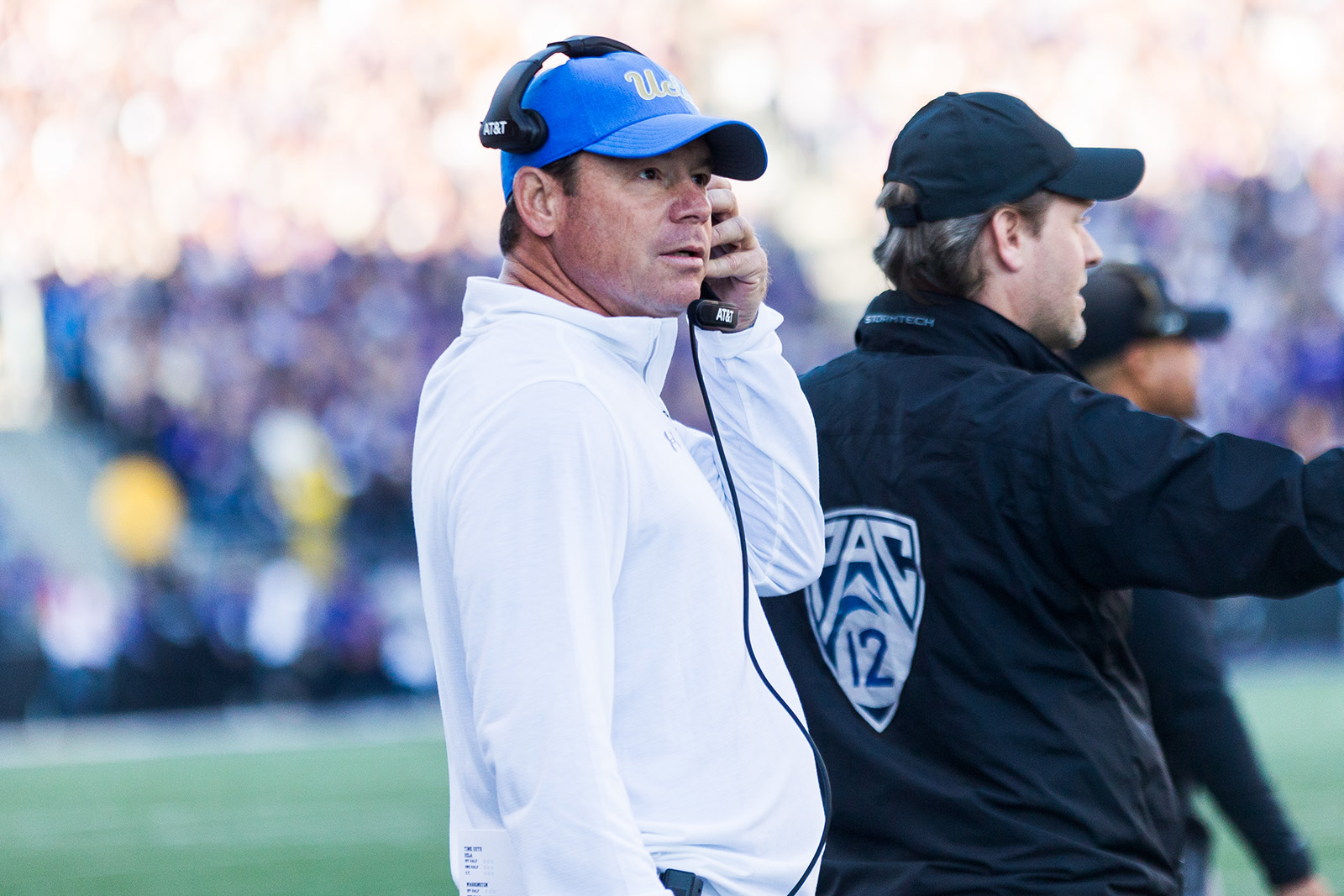 The UCLA football playbook underwent an overhaul this past offseason when coach Chip Kelly was hired to replace Jim Mora. Kelly brought whole new offensive and defensive staffs along with him, and although this year’s Bruins are younger than Mora’s, he has still tried to instill his signature playstyle in Westwood.

DB Sports decided to take a look at what exactly has changed on the field for UCLA, mapping out plays on both sides of the ball from each coach.

This is a staple Kelly passing concept commonly known as “mesh.” Two receivers – junior Theo Howard and redshirt sophomore Demetric Felton – line up tight to the offensive line and run shallow crossing routes. Howard and Felton intentionally almost run into each other to create a natural separation from their defenders. The receiver in motion, redshirt sophomore Dymond Lee, runs a fade to clear out space in the right flat for one of the crossing receivers.

Another common aspect of the mesh concept is a running back – in this case freshman Kazmeir Allen – running a wheel route. This play is well designed because UCLA’s top receiving weapon, redshirt junior tight end Caleb Wilson, runs a seam route that occupies the cornerback and safety to his side of the formation. On top of this, Allen hasn’t been much of a receiving threat out of the backfield this year. Because of a defensive breakdown, Allen was wide open and could have jogged into the end zone.

Kelly calls what looks like an inside zone run here – each offensive lineman either blocks the defensive lineman directly across from him or double-teams the nearest defender if no lineman lines up directly in front of him. Since Arizona’s defensive ends lined up wide of redshirt junior left tackle Andre James and redshirt sophomore tight end Devin Asiasi, those matchups are both one-on-one. Meanwhile, freshman right guard Christaphany Murray and redshirt sophomore right tackle Jake Burton double-team one defensive tackle, while junior center Boss Tagaloa and redshirt sophomore left guard Michael Alves double-team the other. Alves does a good job to come off that block and take on a linebacker trying to plug the B-gap.

This run concept is based on the assumption that one of the double-teams will push the defensive tackle back and open running lanes. Redshirt junior Joshua Kelley initially looked to run past Burton’s outside shoulder, but he spotted two Wildcat defenders leaning that direction. All the running back had to do then was cut to Burton’s inside shoulder, where there was a gaping hole. Kelley finished the run by showing he still had juice left in the fourth quarter.

Since Washington is facing a 3rd-and-8 and has 11 personnel – one running back, one tight end and three wide receivers – UCLA counters with a variation of nickel personnel: two down linemen, four linebackers and five defensive backs. The Bruins only rush four players, but one of them is senior cornerback Nate Meadors, who blitzes from the slot.

UCLA rarely blitzed its corners under former defensive coordinator Tom Bradley, but what’s also interesting is the defense’s back seven.

There seem to be some aspects of pattern matching in the UCLA secondary for this play. The linebackers – redshirt junior Keisean Lucier-South, junior Krys Barnes and redshirt junior Tyree Thompson – take away any underneath routes in front of them, while sophomore corner Darnay Holmes, redshirt senior safety Adarius Pickett and redshirt freshman corner Elijah Gates each quickly retreat to cover their deep third of the field.

The key defender is sophomore safety Quentin Lake. The Bruins come out with a two-deep safety look, but Lake rotates down to cover the Huskies’ No. 2 receiver, Aaron Fuller. Lake is responsible for Fuller if he runs a vertical route, so the safety plays man-to-man once Fuller beats him and runs down the seam. But once Fuller cuts toward the right sideline, Lake passes him off to another defender. Fuller then sits in a soft part of UCLA’s zone, but Washington quarterback Jake Browning is late and overthrows him, leading to an easy interception by Pickett.

In this play, Jim Mora disguises a pass play with one of his power-run concepts. The Bruins line up in a strong I-formation with two receivers stacked on top of one another on the right side. With the fullback and tight ends both lined up on the right side, the defense would not be wrong to assume that UCLA was going to run the ball that direction. However, the Bruins opted for a pass. The fullback ran an out route into the flat, the top receiver ran a wheel down the right sideline and the bottom receiver ran a deep post across the middle of the field. Quarterback Josh Rosen then took a five-step drop and found then-sophomore wide receiver Theo Howard on the deep post for a touchdown.

Mora’s offenses at UCLA revolved around the power run. With a bruiser like then-junior running back Bolu Olorunfunmi in the backfield, Mora took every opportunity to run the ball down the other team’s throat, even if it did not succeed. On this play, Mora utilized the strength of his offensive line and had his three interior lineman pull right in an effort to create a hole. The tackles – along with the tight end – each blocked straight ahead while then-redshirt freshman right guard Michael Alves, center Scott Quessenberry and left guard Najee Toran swung out to the right. Olurunfunmi hit the hole between his tight end and the swinging center, then dashed down the right side of the field before leaping his way into the end zone to cap off the highlight reel play against Oregon.

USC is facing a 4th-and-8 in this play, and UCLA knows Trojan quarterback Sam Darnold is going to have to throw the ball down the field to convert a first down. USC uses running back Ronald Jones II as a sixth blocker to give Darnold extra time and protection while sending a tight end and three receivers on routes.

The Bruins respond by sending a five-man rush and dropping six into coverage, including two deep safeties, three corners and a linebacker.

As the play develops, Darnold’s blocking holds up, but he has nothing open downfield so UCLA eventually pressures him into throwing the ball 15 yards downfield. The Bruins are perfectly positioned, and defensive back Jaleel Wadood comes up with the interception on an overthrow.

With six UCLA defenders covering four USC route runners, the play was doomed from the start for the Trojans.