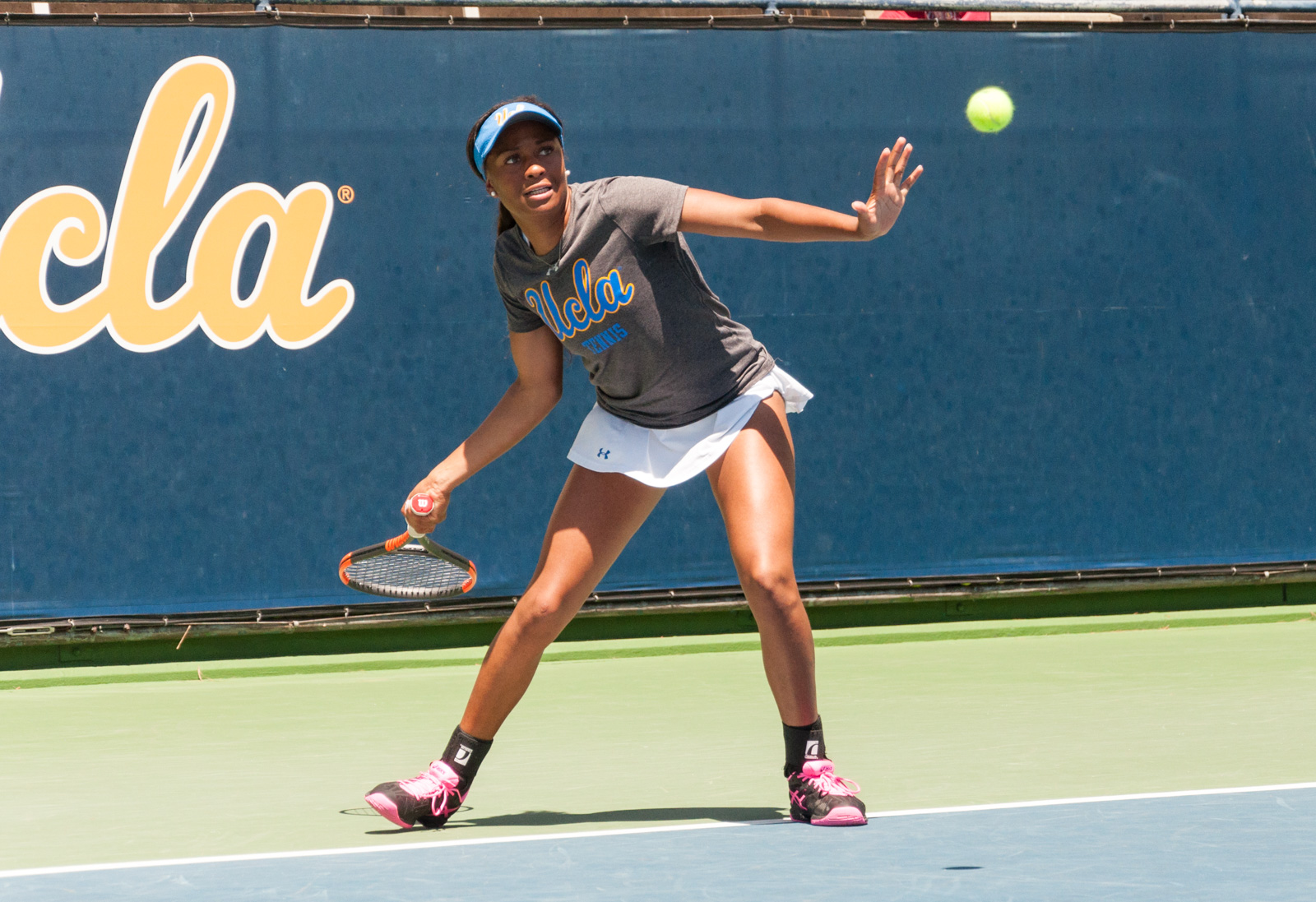 Senior Ayan Broomfield paired up with senior Gabby Andrews in the ITA Southwest Regional Championships over the weekend. The duo brought home the doubles title after coming back from falling in the first set. (Niveda Tennety/Daily Bruin)

Gabby Andrews and Ayan Broomfield elected to take a bathroom break after falling in the first set of the championship match.

“We just talked about what was working and what wasn’t,” Andrews said. “They weren’t really dictating much, we just weren’t executing and we were being tentative.”

The seniors came back to bring home the title.

The No. 5-seeded pair defeated their teammates – No. 4-seeded pair senior Alaina Miller and sophomore Abi Altick – 7-6, 6-3 in the semifinals for a spot in the championships, but dropped the first set of the finals 6-1 to Pepperdine’s No. 1-seeded pair Ashley Lahey and Evgeniya Levashova.

“They were very aggressive and we were reacting to what they were doing,” Broomfield said. “So after the first set, we just had to regroup and become the aggressors.”

The duo said they gathered themselves following the bathroom break and tied it up at one set apiece after winning the second 6-4.

“If we were to sit back and wait for something to happen, we weren’t going to win the match,” Andrews said. “The momentum we had in the second set really helped us carry it on into the tiebreaker.”

Andrews and Broomfield won the tiebreaker 10-8 to win the championship, clinching a spot in the Oracle ITA National Fall Championships beginning Nov. 7.

“I’m really happy for them as two seniors on the team,” said coach Stella Sampras Webster. “To be able to win regionals and now get to go to the national tournament, they definitely deserved it because of their perseverance.”

UCLA had a third doubles pair reach the semifinals – including No. 3-seeded pair freshman Elysia Bolton and redshirt junior Jada Hart – who fell 7-6, 6-4 to Lahey and Levashova.

“Having three of our pairs making the semifinals definitely gives us a lot of confidence going into our season knowing that we have such strong doubles players,” Broomfield said. “Everyone can play with anyone (they’re paired with).”

In singles, six Bruins advanced to the round of 32, while four made the round of 16. UCLA’s No. 10-seeded Bolton and No. 5-seeded Altick reached the semifinals in singles, but both lost in straight sets.

“I was really pleased with how our team competed in singles too,” Sampras Webster said. “Every match that we had a player on the court, they were battling and fighting and had great energy. I thought players got better throughout the matches. … Why we play in these (preseason) tournaments is to get more match play.”