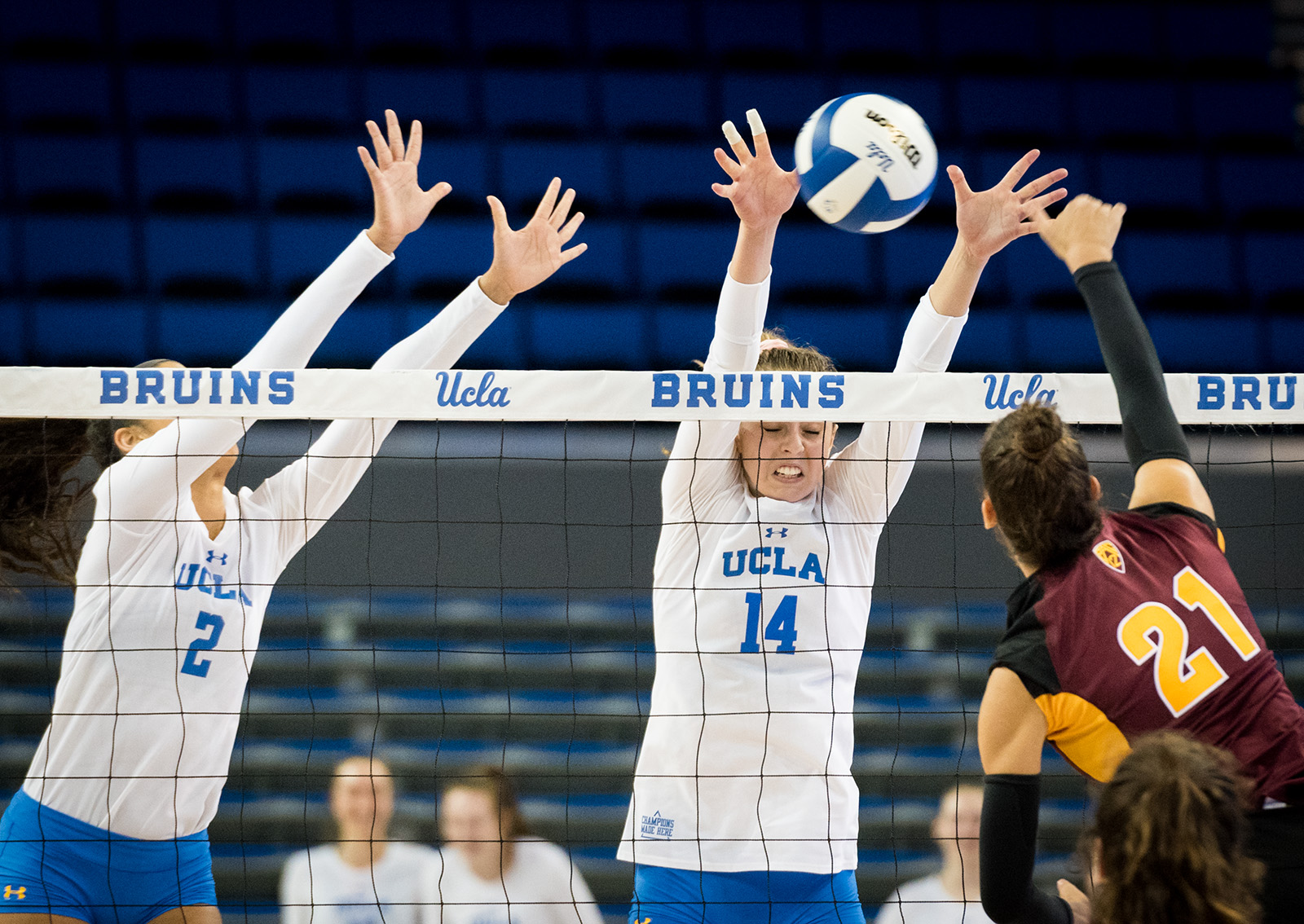 Sophomore outside hitter Mac May led the Bruins in their win over the Sun Devils on Wednesday night, recording 13 kills, four aces and one block. May currently leads UCLA on the season with 190 total kills. (Joe Akira/Daily Bruin)

“I think we’ve had a little trouble earlier on in the season with getting through opponents quickly,” said junior middle blocker Madeleine Gates. “This is definitely going to build morale for our ability to put an opponent away in three sets.”

The Bruins outhit the Sun Devils .333 to -.103 in the opening set with 15 kills. Sophomore outside hitter Mac May led the charge with 6 kills and an ace, more than the entire Arizona State team, which had only 4 kills overall in the first set.

The Bruins went on a 8-0 run to start the second set. Arizona State then scored 10 of the next 15 – including a 5-point run – to close the gap at 13-10, but UCLA never relinquished the lead, winning the set 25-20. The Bruins had eight attack errors, six of which were recorded during the run by the Sun Devils.

“We just got stuck in one rotation,” said coach Michael Sealy. “All those points happened in one rotation, and we were just stuck, so they just scored five or six points in a row.”

The third set started at 1-1 before the Bruins took the lead for good. The Sun Devils kept it close for the first half of the set until the Bruins broke it open at 15-11, scoring seven points in a row and going on to get the sweep with a 25-14 win.

UCLA hit .500 in the third set, holding Arizona State to just .192., and finished the match with double the number of kills by Arizona State, recording 44 to the Sun Devils’ 22.

May and Gates both recorded double-digit kills, with 13 and 12, respectively. May also finished with four of the Bruins’ seven aces on the night, while Gates recorded four blocks.

“This is definitely a big win,” said May. “For us to go out and not underestimate them or overestimate them, I thought it showed we just played really steady and pushed hard.”

Senior libero Zana Muno reached a career milestone in the match, as she passed the 1,300th career dig mark for fifth-place, all-time at UCLA. With her 14 digs against Arizona State, she now has 1,305 total.

“She’s an amazing athlete and a digging machine, no matter what position you played her at,” Sealy said. “Whether it’s at center, defensive specialist or libero, she always contributes making those huge digs.”

Junior setter Kylie Miller recorded her second double-double of the season with 33 assists and 13 digs, and sophomore outside hitter Jenny Mosser contributed as well with seven kills, seven digs and two aces.

UCLA will finish its home stand with a game against No. 23 Arizona at 7 p.m. on Friday.