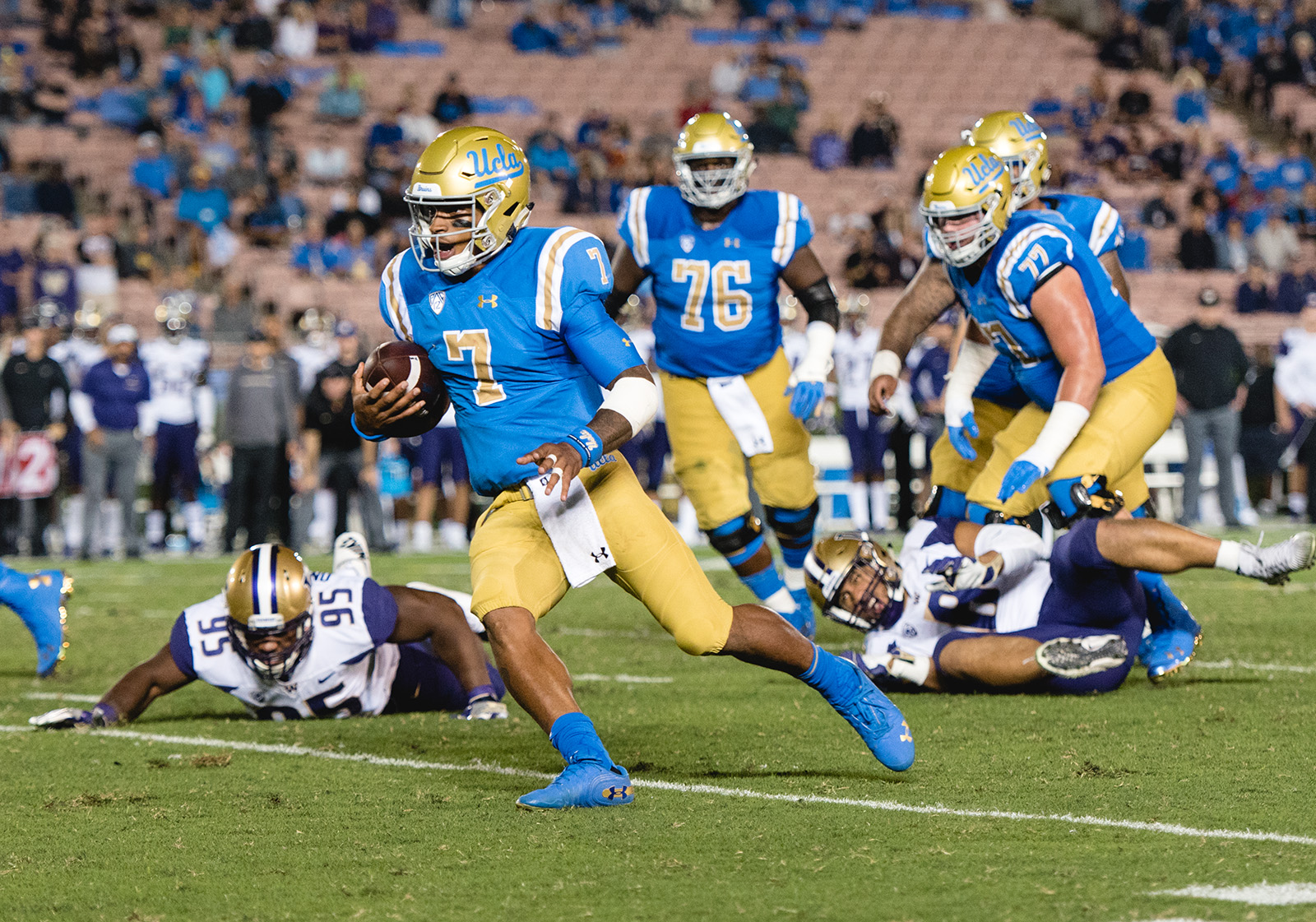 Freshman quarterback Dorian Thompson-Robinson threw for a career-high 272 yards in UCLA’s 31-24 loss to Washington on Saturday. He credited the work of the offensive line for his success. (Kristie-Valerie Hoang/Daily Bruin senior staff)

Most NCAA football offenses have a home run threat.

Even UCLA’s insipid offense that ranks No. 124 nationally in scoring offense has dynamite in freshman running back Kazmeir Allen, who blew past Cincinnati’s defense for a 74-yard touchdown in his collegiate debut this September.

What many collegiate offenses lack, however, is the ability to sustain long drives, especially against upper-tier defenses.

Yet that’s exactly what the Bruins did Saturday against the Washington Huskies’ then-No. 1 scoring defense – on back-to-back possessions no less. UCLA came out after halftime and put together a 12-play, five-minute field goal drive and a 17-play, six-minute touchdown drive.

“Kudos to the offensive line,” said freshman quarterback Dorian Thompson-Robinson. “When you have a run game like we’ve had these past couple games, it really does open up the offense a lot. … You don’t have to put all the weight on the passing game when it comes to third down.”

The Bruins converted a season-high 57.1 percent of their third downs, including all five on the 17-play touchdown drive. That conversion rate corresponded to a season-low average of 5.6 yards to go on third downs – UCLA faced averages of 7.9, 9.4, 7.1 and 7.2 in its first four games of the season.

A big reason for the increased third-down efficiency is the offense’s competence on first and second down and its play-calling balance. For the first time this season, the offensive line didn’t allow a sack, and redshirt junior running back Joshua Kelley was the first Bruin running back since 2015 to register consecutive 100-yard games.

“You can’t just be one-dimensional,” said coach Chip Kelly. “We have to be somewhat balanced so we can run the ball and throw the ball and that’s what we need. We need balance.”

If UCLA’s offense builds on its performance against Washington, Kelly will get his balance. A win is next on the docket.

“The record is not what it should be,” said junior center Boss Tagaloa. “A lot of younger guys, we’re starting to see them thrive and really be successful. … I feel like we should be winning more games, but we’re definitely getting better week by week.”

This might have been what UCLA’s coaches envisioned when they asked Tagaloa to move from defensive tackle to the offensive side of the ball in the spring.

After admitting he was confused by some of Colorado’s defensive looks and snapping a ball into the ground, Tagaloa said he’s been practicing extra snaps with Thompson-Robinson and he went back to the film with offensive line coach Justin Frye to nail down the correct presnap calls.

No tackles for loss for the first time this season, and no botched snaps.

“It all comes down to doing our job, making the right calls, everybody doing their technique and being focused on the guy we had to block,” Tagaloa said. 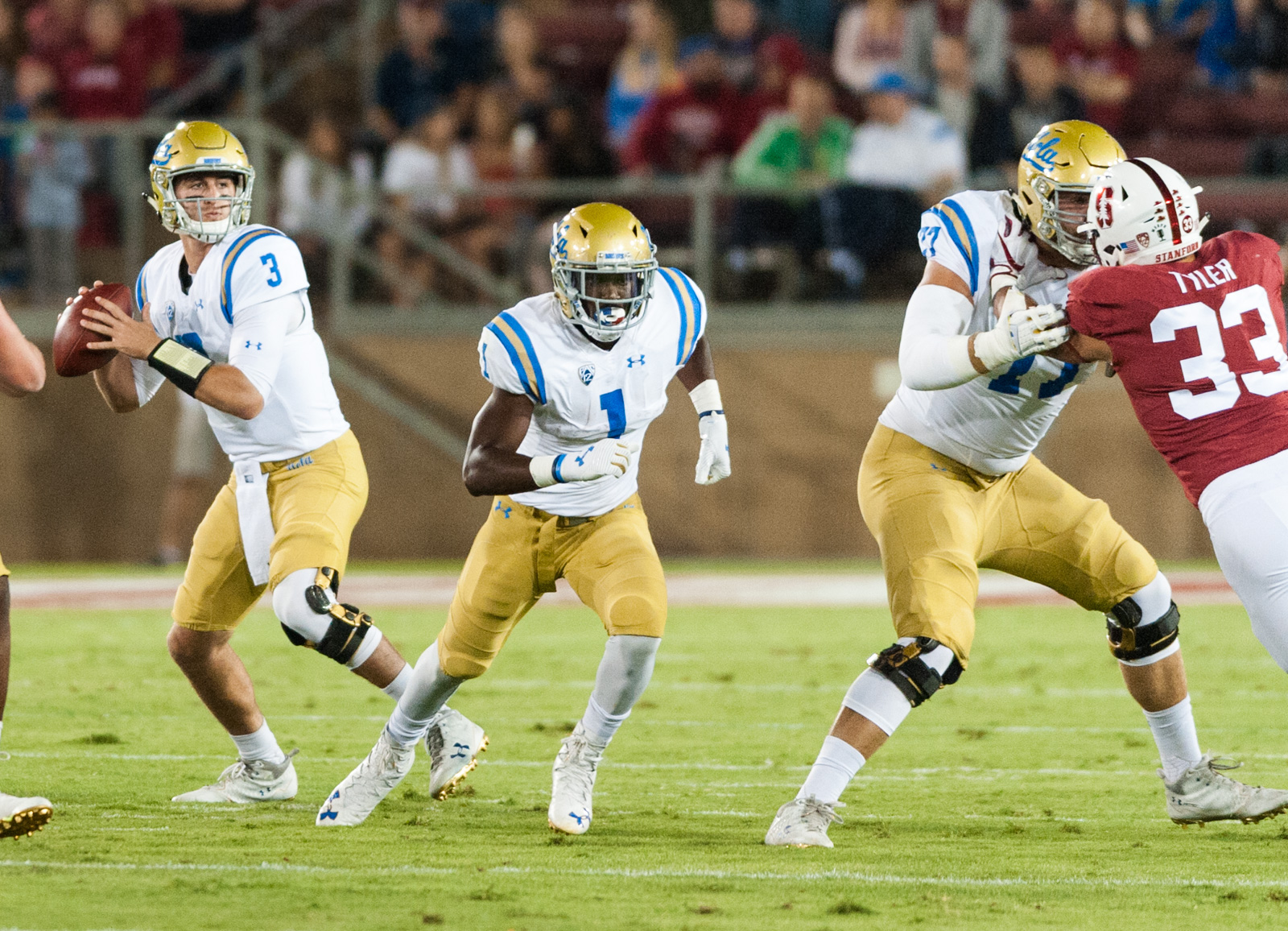