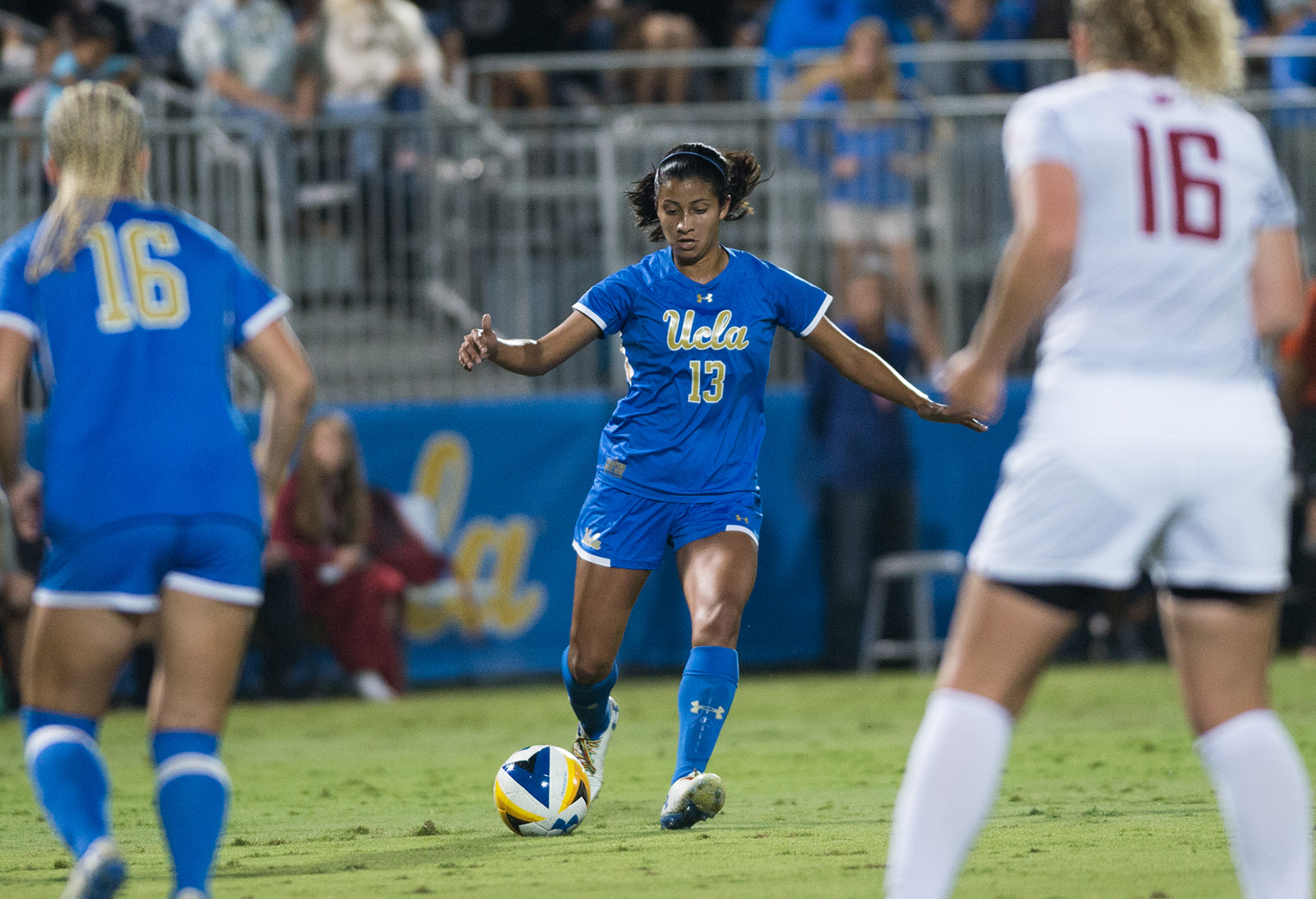 Sophomore midfielder Viviana Villacorta scored in the last 10 minutes of the match to bring the Bruins within one, her first goal of the season. (Edward Figueroa/Daily Bruin)

The Bruins lost to the Cardinal for the fifth straight time in four years.

“We need to have more of a desire to get in the box and finish chances and fight for half chances or deflections or whatever it might be,” said coach Amanda Cromwell. “We need more of a nose for the goal.”

UCLA gained an early lead after a shot on goal from sophomore midfielder Viviana Villacorta was blocked by the hand of a Stanford defender, earning a Bruin penalty kick. Sophomore midfielder Olivia Athens nailed the shot to the bottom left corner to put UCLA up 1-0.

“I think it was what we needed,” Athens said. “We knew if we scored early on them we would have a better shot, but it didn’t end up working that way.”

The Cardinal tied the score within 10 minutes of Athens’ goals, as sophomore forward Catarina Macario – who leads the team with six goals scored this season – took advantage of a through ball that penetrated the Bruins’ back line.

“(Stanford) is good at holding the ball up and playing off each other,” Athens said. “Keeping them from running behind and keeping them in front of us is something we needed to do to stop them.”

Stanford kept UCLA’s back line under consistent pressure for the rest of the game.

Brzykcy has played in four of the last five games in place of the veteran Bruin junior Teagan Micah.

“I’ve been really trying to work on my footwork and my distribution and staying mentally strong and focused,” Brzykcy said. “That’s what (Micah and the coaches) have been teaching me and I’ll keep getting there.”

The keeper kept the score tied until the opening minute of the second half.

Macario scored her second of the night to give Stanford a 2-1 lead after a failed clear from a UCLA defender.

The Cardinal built on their lead in the 77th minute when forward Sophia Smith hustled the ball off a UCLA defender and buried it in the back of the net.

“We just can’t give up soft goals against a team that has quality attacking players and speed like Stanford,” Cromwell said. “Two of the goals came from our mistakes. It’s hard when we’re trying to build to do what we want to do and then we give up the ball on a turnover.”

Only a minute later, Villacorta brought the score within one for UCLA. With the ball bouncing around and unclaimed in Stanford’s box, the sophomore got a foot on it to make the score 3-2 with 12 minutes to play. It wasn’t enough.

The Bruins recorded their second straight loss, moving to a 0-2 record in the Pac-12.