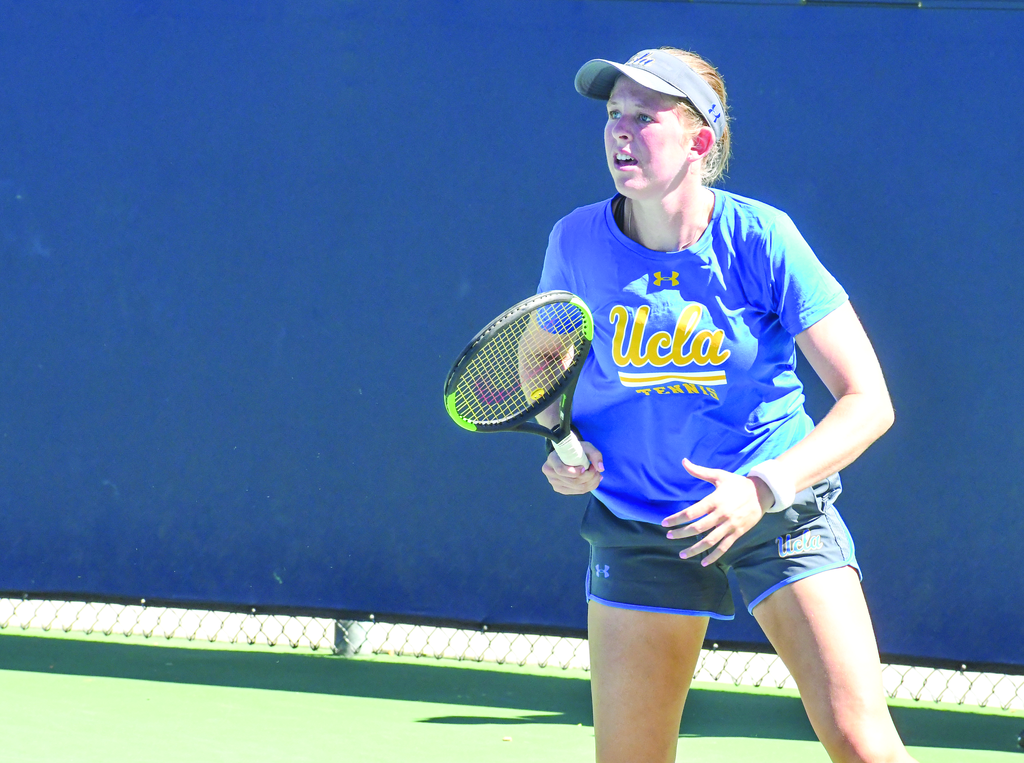 Freshman Elysia Bolton was the only Bruin to qualify and compete in the Oracle ITA Masters last weekend. The New York native made it to the quarterfinals after falling in two sets to Miami’s Estela Perez-Somarriba.

The Bruins are back in action and competing in individual tournaments.

Freshman Elysia Bolton made her UCLA women’s tennis debut Sept. 20 as the only Bruin to compete at the Oracle ITA Masters. Bolton and five other Bruins will participate at the Riviera/ITA Women’s All-American Championships on Saturday.

“It was really exciting to represent UCLA for the first time,” Bolton said. “I’ve been committed for two years so it was like, ‘Finally.’”

No. 5-seeded Bolton fell 6-4, 6-0 to Miami’s No. 4-seeded Estela Perez-Somarriba in the quarterfinal round at the Oracle ITA Masters.

Bolton has competed at the junior level in all four Grand Slams and reached the quarterfinals in both singles and doubles at the 2017 US Open Junior Tennis Championships. The New York native was ranked the No. 1 recruit according to TennisRecruiting.net and is No. 22 in the International Tennis Federation junior rankings.

“It’s going to be a time for her to get comfortable,” said coach Stella Sampras Webster. “But as soon as she does, I expect her to play a lot for us and win a lot for us.”

Sampras Webster said that Bolton not only brings high-level experience to the team, but she expects the freshman to foster deep talent within the lineup.

“I think she’s going to even help everyone else on our team because she brings intensity (and) professionalism every day,” Sampras Webster said.

Even though UCLA doesn’t begin team competition until January, some Bruins will compete in individual tournaments that they qualify for in the fall.

Bolton and many of her other teammates will be participating at the All-American championships this weekend in Pacific Palisades, California.

“I’m really excited because I didn’t make it last year,” said sophomore Abi Altick. “So I’m excited to play this year. I know everybody is going to be good there, so I’ve just been playing a lot of single sets and working on some doubles and also working on my serve a lot.”

For most of the team, the All-American championships will be the first time playing for UCLA since the Bruins’ Elite Eight run last season. UCLA fell to Georgia Tech in Winston-Salem, North Carolina, at the NCAA championships 4-3 in May.

The Bruins only graduated Terri Fleming from last season’s core lineup, so UCLA will have the opportunity of matching or exceeding last year’s run.

Sampras Webster said her players are staying competitive every day because they know that the spots in both the singles and doubles lineups are up for grabs.

“If they get comfortable and complacent, it’s just easy to go through the motions,” Sampras Webster said. “But the lineup is going to be the most difficult thing that I’m going to have to figure out because everyone is so good and competitive.”