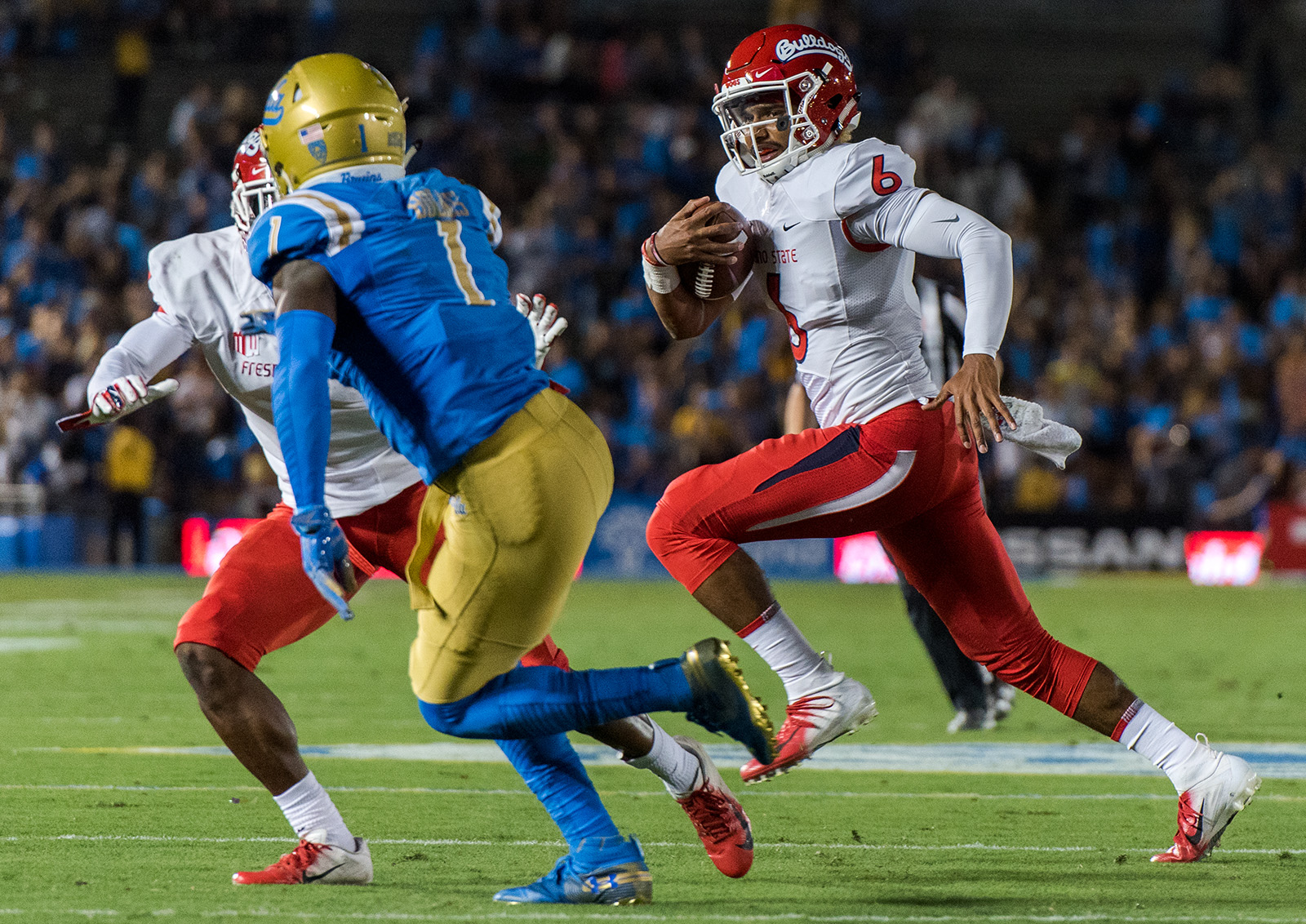 Fresno State quarterback Marcus McMaryion accounted for five touchdowns in the Bulldogs’ 38-14 win over the Bruins on Saturday night. UCLA will enter conference play at the end of the month without a victory this season. (Kristie-Valerie Hoang/Daily Bruin senior staff)

The Bruins will head into their bye week without a win.

UCLA football (0-3) failed to secure its first win of the season Saturday night at the Rose Bowl, falling to Fresno State (2-1) by a score of 38-14. This marks the first time since 1971 the Bruins have opened the season with three consecutive losses.

“We knew that (Fresno State is) one of the best teams in the Mountain West and we had to be prepared to play them,” said coach Chip Kelly. “Obviously they did a better job, they outcoached us and they outplayed us today.”

The Bulldogs scored a pair of touchdowns and a field goal on their first three possessions, but the Bruins fought their way back into the game by capitalizing on a pair of turnovers.

Howard finished the night as the only Bruin receiver to record more than two receptions, and led the team with 80 receiving yards.

UCLA opened the third quarter with a drive ending in a punt, but Fresno State muffed the kick and junior long snapper Johnny Den Bleyker recovered at the Bulldogs’ 17 yard line.

Three plays later, senior running back Bolu Olorunfunmi scampered into the end zone to make the score 16-14 Fresno State. The touchdown was Olorunfunmi’s fourth in three games this season.

That would be the closest UCLA ever got, however.

Fresno State scored 15 unanswered points to close out the third quarter on a pair of rushing touchdowns from quarterback Marcus McMaryion. McMaryion completed 22 of his 33 passing attempts for 270 yards and a touchdown, adding four more on the ground.

The Bulldogs outgained the Bruins 420-270 and won the turnover battle 4-2. UCLA also shot itself in the foot with 11 penalties for 96 yards.

Saturday also marks the first time since 2010 in which UCLA failed to record more than 21 points in three straight games. Howard said the offense is still trying to put all the pieces together in Kelly’s new system.

“We’re just getting used to each other and trying to get the playbook down,” Howard said. “It’s a process but we’ll get there and we just have to keep faith.”

Thompson-Robinson threw a pair of interceptions in the second half on a night during which he looked subpar at best, which is unfamiliar territory for the freshman. As a senior at Bishop Gorman High School – one of the top programs in the country – he lost just two games and had 38 touchdowns to three interceptions.

“I come from a background of not losing very much, so this is definitely something new to me and something I have to get used to,” Thompson-Robinson said. “Some of my actions tonight were not up to standards for being a quarterback at all, so I apologize to my team for that.

On the ground, Thompson-Robinson led the Bruins in rushing yards with 49 on eight carries.

Kelly said despite Thompson Robinson’s rough night under center, he still has faith in the learning ability and growth of his young quarterback.

The Bruins will have to wait until Sept. 28 when they travel to Colorado for the start of conference play to get another opportunity at recording their first win of the season.

Howard said the team needs to focus on cleaning things up before that time comes, however.

“We can’t dwell on this,” Howard said. “We have a bye week. We have to take advantage of that, get some film in, study Colorado and just get back to it.”